Facebook Twitter LinkedIn
Thai Prime Minister Yingluck Shinawatra proposed a referendum on her future on Sunday and promised to resign if that was what the people wanted, as anti-government protesters prepared for a final push to force her from power.
Protesters have been on the streets of the capital for weeks, clashing with police and vowing to oust Yingluck and eradicate the influence of her self-exiled brother, former Prime Minister Thaksin Shinawatra.
The demonstrations are the latest eruption in nearly a decade of rivalry between forces aligned with the Bangkok-based establishment and those who support Thaksin, a former telecommunications tycoon who won huge support in the countryside with pro-poor policies.
The leader of the anti-government protesters, Suthep Thaugsuban, a former deputy prime minister of the pro-establishment Democrat Party, has called for a final demonstration on Monday to force Yingluck out.
Yingluck said in a televised statement her government was searching for ways to end the conflict.
"We should conduct a referendum so that people can decide what we should do," she said.
Suthep, aware that Yingluck and her party would likely win an election if one were called, has been urging the setting up of a "people's council" of appointed "good people" to replace the government.
Yingluck has dismissed the idea as unconstitutional and undemocratic. She did not spell out the specifics of any referendum but said it was in line with the constitution.
"I'm willing to listen to proposals from the protesters. I'm not addicted to this title," she said. "I'm ready to resign and dissolve parliament if that is what majority of the Thai people want."
Suthep has told his supporters they had to take back power from what he calls the illegitimate "Thaksin regime".
The protesters have missed successive deadlines for forcing Yingluck out and their numbers have been dwindling. Suthep said on the weekend if they were not successful in ousting the government on Monday he would give up his fight.
The government has not used excessive force against the protesters and Yingluck told reporters on Saturday the police would act with restraint if people tried to occupy public buildings, including their main target, her Government House offices.
Five people have been killed in clashes between rival activists and scores have been hurt, many by teargas the police have been firing to keep protesters out of government buildings.
The protesters occupy the Finance Ministry and a government administrative complex.
Thaksin fled Thailand in 2008 to avoid a graft conviction but has remained closely involved with his sister's government.
The protests were sparked last month by a government bid to introduce an amnesty that would have expunged his conviction.
Tags
Protest in Thailand Hundreds gather in Bangkok to issue ultimatum to military government 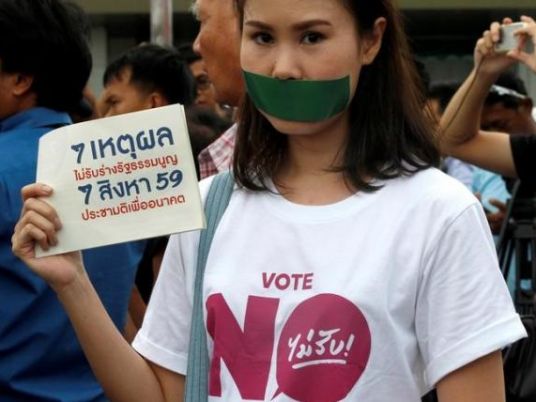 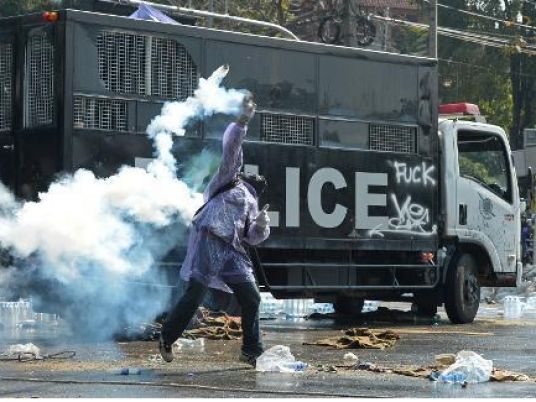 Thai protesters pour their own blood on streets