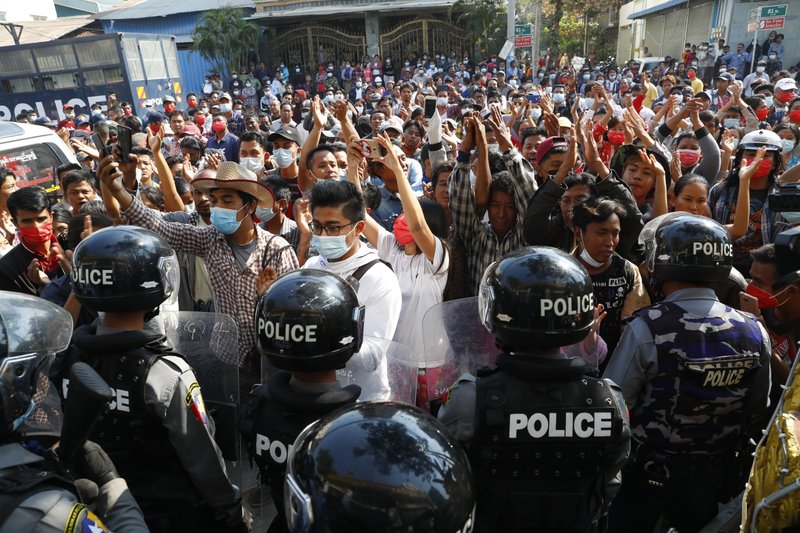 YANGON, Myanmar (AP) — Mass street demonstrations in Myanmar entered their second week Saturday with neither protesters nor the military government they seek to unseat showing any signs of backing off from confrontations.

Protesters in Yangon, the country’s biggest city, again congregated at Hleden intersection, a key crossroads from which groups fanned out to other points, including the embassies of the United States and China. They marched despite an order banning gatherings of five or more people.

The U.S., especially after the announcement by President Joe Biden of sanctions against the military regime, is regarded as an ally in the protesters’ struggle against the Feb. 1 coup. China is detested as an ally of the ruling generals, whose support is crucial to them keeping their grip on power.

Demonstrations also resumed in the second biggest city, Mandalay, with lawyers making up one large contingent.

The junta led by Senior Gen. Min Aung Hlaing said it was forced to act because Suu Kyi’s government failed to properly investigate allegations of fraud in last year’s election, which her National League for Democracy party won in a landslide. The election commission said there is no evidence to support the military’s claims.

Saturday’s protests coincided with the birthday of Gen. Aung San, the country’s independence leader and father of Suu Kyi. His name and image have appeared on signs carried by some demonstrators.

Authorities have stepped up the arrests of politicians and activists, and in areas outside Yangon have become more aggressive in trying to break up protests.

According to the independent Assistance Association for Political Prisoners, at least 326 people have been detained since the coup, of which 303 remain in custody.

There have been many reports over the past three nights of raids during a curfew in which security personnel have tried to seize people from their homes.

In several cases, neighbors and others people have rushed to the scene in such numbers that security forces have abandoned their attempts to haul in their targets. Videos of such raids have been widely posted on social media.

The prisoners’ association also said that riot police fired rubber bullets, injuring five students, and took away another nine in a protest Friday in the southern city of Mawlamyine.

“Family members are left with no knowledge of the charges, location or condition of their loved ones,” it said in a statement. ”These are not isolated incidents and nighttime raids are targeting dissenting voices. It is happening across the country.”

Detainees have included political leaders, government officials, civil servants, activists and student leaders. Medical personnel have been singled out because their community initiated the civil disobedience campaign against the military takeover and remains in its vanguard.

The military ruled directly for five decades after a 1962 coup, and used lethal force to quash a massive 1988 uprising and a 2007 revolt led by Buddhist monks.

The U.N.’s top human rights body on Friday passed a consensus resolution urging the military to immediately release Suu Kyi and other civilian government leaders while watering down a draft text amid pressure led by China and Russia.

In a special session at the Human Rights Council in Geneva, the original resolution presented by Britain and the European Union was revised to remove calls to bolster the ability of a U.N. rights expert to scrutinize Myanmar and for restraint from the country’s military.

After the updated resolution passed with no opposition, Chinese Ambassador Chen Xu thanked the sponsors for “adopting our recommendations” but said China still was distancing itself from the measure.

Image: Residents and protesters face riot police as they question them about recent arrests made in Mandalay, Myanmar, Saturday, Feb. 13, 2021. Daily rallies against the coup occurring in Myanmar’s two largest cities, Yangon and Mandalay, enter its second week despite a ban on public gatherings of five or more. (AP Photo)

Myanmar's military: A state within a state