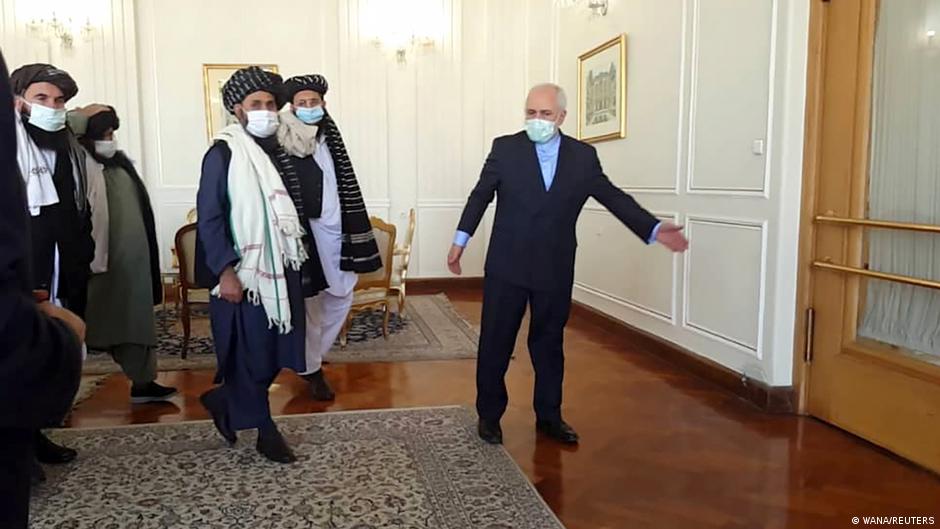 During talks in Tehran, Ali Shamkhani, secretary of the Supreme National Security Council of Iran, told a Taliban delegation: “The US strategy supports the continuation of violence and war between Afghan groups within the political spectrum,” according to Iran’s state news agency IRNA.

In turn, Abdul Ghani Baradar, the Taliban’s political bureau chief, did not mince his words: “We don’t trust the United States and we will fight any group that supplies mercenary services for the US.”

He also accused the former Trump administration of failing to act constructively in accordance with its agreement signed with the Taliban after drawn-out negotiations in Doha in February 2020.

Talks between the Taliban and Iran are no longer unusual but they are not a foregone conclusion either. Relations between the two sides have not always been as close as they are now. On the contrary, both parties were deadly enemies not so long ago. In 1998, Iran nearly launched a military offensive against the Taliban after Afghani militants and Pakistani fighters killed 11 Iranian citizens, including several diplomats in the northern Afghan city of Mazar-i-Sharif.

And after the terror attacks on New York and Washington on September 11, 2001, Iran supported the United States in its battle against the Taliban. The Americans identified al-Qaeda leader Osama bin Laden as the man responsible for 9/11. At the time he was living in Afghanistan and Taliban leaders refused to hand him over, prompting the US, together with Afghan fighters, to wage a war to topple the Taliban regime.

But the Taliban continued to fight against the new Western-backed government in Kabul and against the Afghan army and its NATO allies. The militant extremists were financed by Saudi Arabia and later, after the US invasion of Iraq in 2003, by private fundamentalist foundations.

Riyadh only cut off funding after Washington put the Saudi kingdom and its close allies in the region under increasing pressure. Subsequently, the Taliban started looking for a new partner, finding it in Iran.

At first, that new relationship did not look too promising. In terms of faith alone, the two sides — although both Muslim — are as distant from one another as possible.

While Iran regards itself as the protector and leader of the Shiites, the Taliban stand for a radical Sunni interpretation of Islam. But this diametrical opposition no longer plays a role, according to Hamidreza Azizi from the German Institute for Security and International Affairs (SWP) in Berlin.

“On the contrary, it has become apparent that both sides are taking a very pragmatic approach. From an Iranian viewpoint, the Taliban are simply too influential to ignore. Conversely, the Taliban have not dropped their radical convictions but they have also shown themselves willing to play a political role. That is also clear from their talks with the United States about the future of Afghanistan. And that, in turn, is a reason for Iran to retain contact with the Taliban.”

And never has this been more evident than over the last two years as tensions with the US have escalated in the wake of the Trump administration’s withdrawal from the Iran nuclear deal. “That development is another reason Tehran does not want to lose its contacts with Afghanistan,” said Azizi. This, however, has not stopped the Iranian government from maintaining diplomatic relations with the official government in Kabul.

“The Iranian leadership is clearly of the opinion that without contacts to all the various parties and players in Afghanistan their interests could be imperiled if there is a shift of power in the future,” Azizi added.

Common front against ‘IS’

Iranian and Taliban representatives have met repeatedly for this very reason. And that is not all. Tehran also supplies the Taliban with weapons. According to reports in the web magazine “War on the Rocks,” senior Iranian politician Ali Shamkhani admitted this fact to the Afghan government on December 2018. The magazine quoted him as saying that they were “only small arms, not combat weapons.”

At the time, Shamkhani said the arms served to increase the safety of the Taliban in the Iranian-Afghan border region. There are numerous smugglers in the region and there are frequent illegal border crossings. Various rival Sunni militant groups, such as the Jundullah, are also active in the area.

Iran and the Taliban share a slew of common interests. Both are striving to achieve the complete withdrawal of the US military from Afghanistan and both are fighting against the so-called Islamic State (IS) terror organization, which has also gained a foothold in Afghanistan.

“Iran is concerned that continuing instability in Afghanistan would give IS and other radical groups more room to maneuver and potentially endanger the security of Iran’s eastern borders,” says Hamidreza Azizi. He says that is why Tehran sees it as imperative to press the Afghan government and the Taliban to reach a compromise.

Snuggling up to the Taliban not popular at home

The US government, too, is pursuing the same goal. Striving to achieve a national peace solution was part of the US deal reached with the Taliban in February 2020. However, in the light of the ongoing violence, US President Joe Biden’s administration has already indicated that it intends to review the agreement reached under Trump. That could postpone the complete pull-out of US troops from Afghanistan indefinitely. The bellicose statements from Iran and the Taliban at their talks in Tehran could be a response to that possibility.

SWP’s Azizi is doubtful that Iranian and Afghan citizens are enthusiastic about the buddying up between Tehran and the Taliban. “The approach might serve the security interests of Iran and preserve its influence in Afghanistan but it comes at the cost of grave damage to its image among its own population,” says the Iran expert.

As US warns on withdrawal, data shows Taliban attacks climb in past year