Dazzled by the noise of the dice hitting the tables around her, an American friend of ours looked at the tables with her eyes wide open and asked in wonder about the game all these people were playing. “Tawla [backgammon] is the name of this game,” we pointed out, as she closely monitored the movements of the round black and white pieces while we tried to explain the game to her.

Fast-forward three months, and that same girl is sitting in a downtown cafe, holding a shisha pipe in her hand (cherry flavored–her favorite), and throwing the dice professionally. She wins every time someone challenges her to a duel and she uses the Persian terms in counting the results of the dice.

Tawla is one of the oldest and most famous strategy games in history, as well as a staple in Egyptian cafes, along with Turkish coffee and shisha. The game is a delicate balance between strategic thinking and pure luck, as both are essential to winning the game.

Backgammon is traditionally for two players. The pieces are moved according to the roll of dice, and players win by removing all of their pieces from the board. Most variants of Tawla share common traits, and Mahbousa (Locked-in) is the most famous variation of the family of table board games in the Arab world.

Like chess, backgammon includes numerous options for moving the checkers, allowing players to pick the right move while anticipating possible counter-moves by the opponent.

“It’s an addictive game,” says Ayman, who is sitting next to two players at an outdoor cafe in downtown Cairo. The weather is cold, yet the players and those around them are deeply focused on following the turns of dice. “I can’t stop watching and thinking with my friend who is playing. I feel like I’m playing with them.”

The game box is divided into four sections. Two belong to the players at the beginning of the game while the other two constitute the “battle field” where the game takes place. The goal is to move all your pieces into the other player’s field. Each section is divided into six lines, and when you get a certain number–say, for example, four–you are allowed to move one checker four lines forward.

Ayman, 29, does not believe that luck plays any role in the game at all. “It’s an extreme game of brain-activity and it allows you to see the huge number of options you have to move your pieces. You need to understand the technique of the game, as you need to be careful that your pieces do not become locked-in by the other player’s pieces.”

In Mahbousa, if you leave one of your pieces alone on a certain field, the opponent might get lucky and roll a dice number that allows them to put one of their pieces on top of yours, locking in that piece. Your piece becomes trapped until the other player moves his piece.

The history of backgammon goes back approximately 5000 years, and interesting enough, a version of backgammon was first played in ancient Egypt. The ancient Egyptian game Senet was excavated, along with illustrations, from Egyptian royal tombs. The oldest hieroglyph representing a Senet game dates to circa 3100 BC. The full name of the game in Egyptian means the "game of passing."

Ancient Iran, however, is popularly believed to be the land where backgammon was first played. Called Shahr-e Sokhteh (literally "The Burnt City") in Iran, uncovered artifacts include two dice and 60 checkers (similar to the current pieces of the game) and the set is believed to be 100 to 200 years older than sets found in Egypt.

“Of course it’s an Iranian game,” says Magdy, 34, while playing the game viciously against his brother-in-law. “When we play it, we use the Iranian way of counting the results of the dice.” Magdy, who does not take his eyes off the board while talking to Al-Masry Al-Youm, explains that when you roll a one on your dice, you say “Yak,” and two equals “Due,” three is “Sah,” four is “Jihar,” five is pronounced “Benj,” and six is “Shish.”

“As you can see, I got a two and a three on the two die I just threw: I would call it ‘Due-Sah,’ which is exactly what I need,” he points out, while his opponent cringes.

While the game seems simple enough for most to understand, if a player cheats to win, all bets are off. Numerous cheating methods have been used and developed in backgammon and the practice is not uncommon.

“Sometimes I move the checker the wrong number of spaces,” Zakria, a famous player in the Borsa cafe district in downtown Cairo says discreetly. “Some people just trust you when you move the checker fast enough. Moreover, I have some special throws to produce the dice number I desire. It works every time.”

“Cheating in this game is an art, but don't tell anyone I told you that,” he adds, looking around suspiciously.

Tawla is not limited to a certain age group. At a cafe in Dokki, two young players in their twenties compete for the third time after a long tournament between them. Their other two friends, however, are occupied by a PlayStation football game. “I like Tawla a lot,” Mohamed Salim, 22, says. “It’s a game where my mind is not following small characters on the screen, and it’s not about my ability to control a joystick perfectly. It’s about my concentration and my ability to pick the right choice for me.” 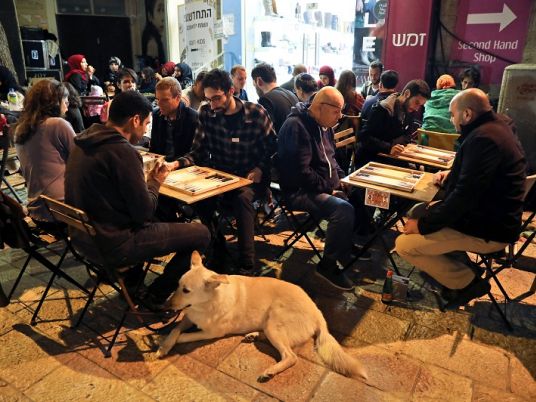 In photos: Jews and Arabs face off in Jerusalem, but it’s not what you think