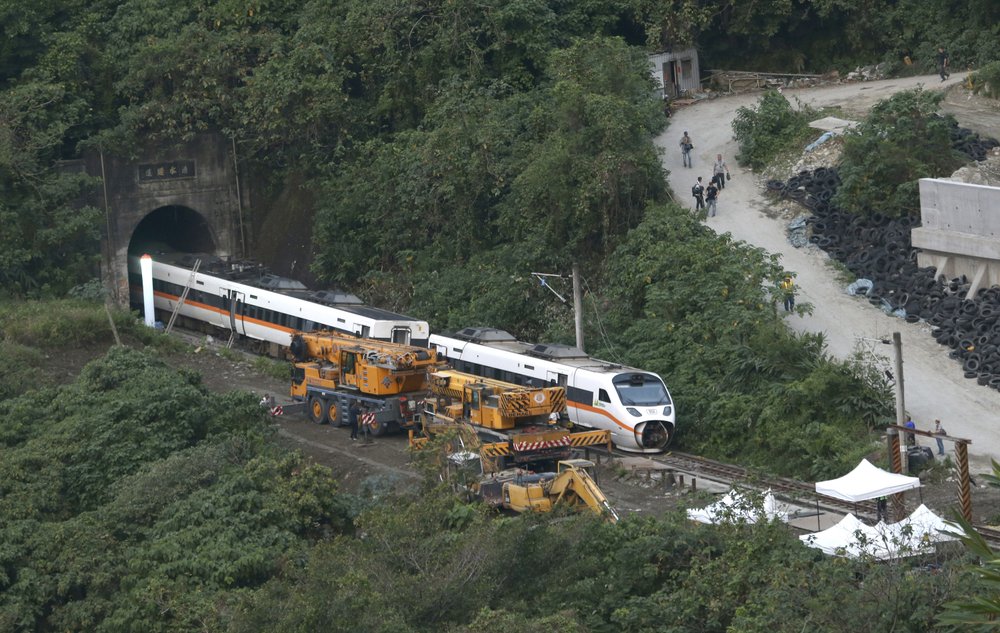 HUALIEN COUNTY, Taiwan (AP) — Prosecutors in Taiwan on Saturday sought an arrest warrant for the owner of an unmanned truck that rolled onto a train track and caused the country’s worst rail disaster in decades, killing 50 people and injuring 178.

The train was carrying 494 people at the start of a long holiday weekend on Friday when it smashed into the construction truck, the Taiwan Railways Administration said. The truck’s emergency brake was not properly engaged, according to the government’s disaster relief center.

The crash occurred just before the train entered a tunnel, and many passengers were crushed inside the mangled train carriages. With much of the train stuck inside the tunnel, some survivors were forced to climb out of windows and walk along the train’s roof to safety.

Authorities initially reported 51 deaths but revised the count down by one on Saturday. Among those killed was a U.S. citizen. Another U.S. citizen who was on the train was reported missing, according to a statement by Taiwan’s Foreign Ministry.

Yu Hsiu-duan, chief prosecutor in eastern Hualien County where the train derailed, said they were seeking an arrest warrant for the truck’s owner, who was questioned along with several others. She didn’t offer details citing an ongoing investigation.

The Hualien district court allowed the truck owner to post bail of 500,000 new Taiwan dollars (US$17,516) but he must stay in the county and avoid contact with any witnesses, Taiwan’s Central News Agency reported.

President Tsai Ing-wen visited hospitals near the crash instead of the site itself so as not to interfere with rescue work, her spokesperson said.

“This heartbreaking accident caused many injuries and deaths. I came to Hualien today to visit the injured and express my condolences to the deceased passengers’ families,” Tsai said. “We will surely help them in the aftermath.”

Tsai told reporters Friday that she asked the Transportation Safety Committee to conduct a strict investigation.

“When such a thing happens, I feel very sorry and I will take full responsibility,” Lin said after touring the site.

Workers removed the two rearmost cars from the tracks Saturday morning. However, a third could not be moved before the tracks are repaired while the other five cars were still wedged into the tunnel. Two large construction cranes could be seen drawn up next to the train in a remote area on the island’s east coast.

The operation should be done within a week, said Weng Hui-ping, head of the railway administration’s news group. During the repairs, all east coast trains will run on a track parallel to the one damaged in the accident, causing delays of 15 to 20 minutes, he said.

The National Fire Service said the dead included the train’s young, newly married driver and the assistant driver. The government’s disaster response center said it was the worst rail disaster since a train caught fire in 1948 in suburban Taipei, killing 64 people.

Train travel is popular during Taiwan’s four-day Tomb Sweeping holiday, when families often return to hometowns to pay respects at the gravesites of their elders.

Taiwan is a mountainous island, and most of its 24 million people live in the flatlands along the northern and western coasts that are home to most of the island’s farmland, biggest cities and high-tech industries. The lightly populated east where the crash happened is popular with tourists, many of whom travel there by train to avoid mountain roads.

By RALPH JENNINGS and JOHNSON LAI

Image: Rescue workers remove a part of the derailed train near Taroko Gorge in Hualien, Taiwan on Saturday, April 3, 2021. The train partially derailed in eastern Taiwan on Friday after colliding with an unmanned vehicle that had rolled down a hill, killing and injuring dozens. (AP Photo/Chiang Ying-ying)