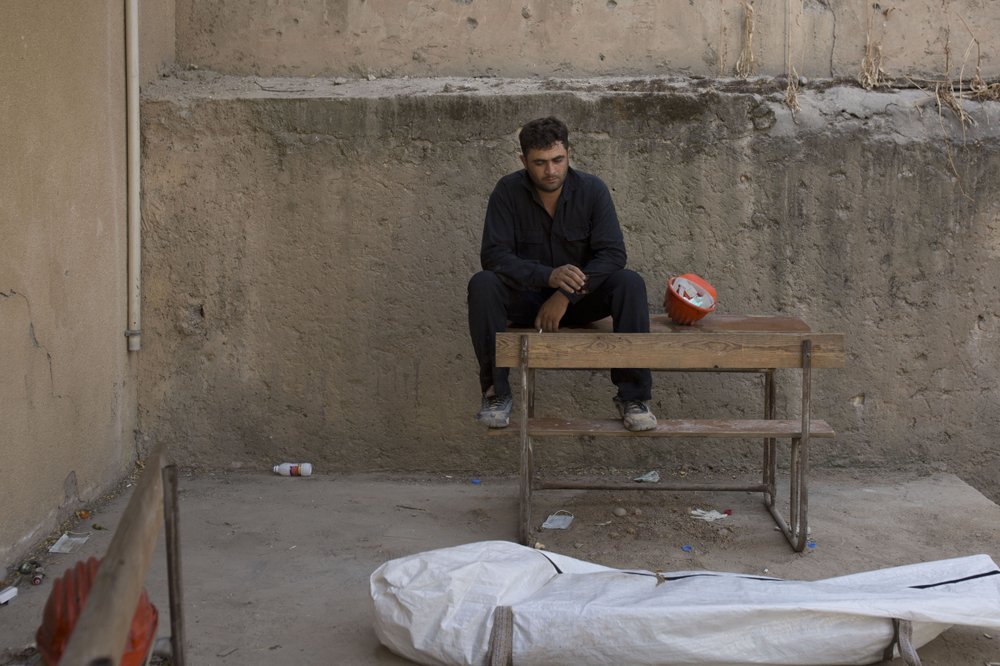 RAQQA, Syria (AP) — The neighbors reported a foul smell coming from the house next door. The house, which the Islamic State group had used as a school for its “cubs,” had been untouched ever since the militants were chased out of the Syrian city two years ago. Weeds grew around an abandoned car in its courtyard.

Even before the first responders felt the soft ground of the courtyard, they knew what was underneath: the latest mass grave in Raqqa, the former capital of the Islamic State group’s self-declared “caliphate.”

On the first day of digging, they pulled out two bodies. Within a few days, that was up to nearly 20, including women and children, who had been stacked up in holes in the courtyard garden.

The discovery, seen by Associated Press journalists over the weekend, was the 16th mass grave found in Raqqa since IS militants were driven out in the summer of 2017. Even as Raqqa’s people gradually rebuild, the graves found in houses, parks, destroyed buildings are a grim mass gravesreminder of the horrors perpetrated by the militants and the massive violence inflicted on the city to remove them.

During their rule, the extremists carried out mass killings, public beheadings and other atrocities. Women and men accused of adultery were stoned to death, while men believed to be gay were thrown from the tops of buildings and then pelted with stones.

More death came in the years-long aerial and ground campaign to liberate Raqqa, waged by Kurdish-led forces backed by airstrikes from the U.S.-led coalition. The assault destroyed nearly 80% of Raqqa.

So far, 5,218 bodies have been exhumed from mass graves or from under the ruins of destroyed buildings around Raqqa, said Yasser Khamis, who leads the team of first responders. Of those, around 1,400 were IS fighters, distinguishable by their clothes and including some foreigners, he said. Of the remainder, 700 have been identified by their loved ones, mainly because they were the ones who buried the bodies.

Khamis said limited resources have slowed the search and made it difficult to determine the cause of death for most. But those killed have died in airstrikes, land mine explosions, mass killings or they were IS fighters or victims buried by the group. Some were recently exhumed with handcuffs.

The dead found in the latest grave were likely killed in the last days of the furious battles for Raqqa, buried in a rush during the fighting. The house is located in Raqqa’s Bedouin District, scene of one of the last IS stands against the siege.

The house was built in a traditional Arab style, with a courtyard in the center surrounded by rooms. The outside walls were pockmarked with bullet holes. IS had used it as a school during its rule, and school notebooks and children desks were strewn around the rooms.

In the garden in the courtyard, diggers pulled a new body from the ground Saturday as an AP team visited the site. It had a uniform on it, sign of an IS fighter. Digging ended Monday, with a total of 19 bodies found, including three women and two children.

Ibrahim al-Mayel, a digger, said many of the bodies they had found had been piled roughly on top of each other in the ground.

Such house burials account for most of the city’s mass graves as civilians buried their dead where they could, unable to go far as fighting intensified. Other graves in the same district — two in homes, two in gardens — have yielded 90 bodies.

At least two mass graves have been found in open areas in the city — a public park and a training compound— or on the city’s edges, where fighters buried their own or people they killed. The grave in the park held at least 1,400 bodies, according to Khamis. His teams are still digging up bodies in a mass grave outside the city, where they found more than 700 so far.

“I expect that this Arab house is the last location within the city. We will then focus on the countryside,” Khamis said of the latest discovery.

Raqqa was the seat of the militant’s self-proclaimed caliphate, which at its height in 2014 stretched across a third of both Syria and Iraq. This year, the last village held by the group was retaken, in eastern Syria, though the militants are still present along the border and stage attacks.

In Syria’s 8-year-old civil war, more than 100,000 people have been detained, abducted or gone missing, according to the U.N, most of them disappeared by the government. Tens of thousands have likely vanished into mass graves, many of them victims of IS. Khamis said his team has recorded 2,000 people missing from Raqqa, based on family reports. But he said the number doesn’t reflect the full reality, since many families gave up on their missing, couldn’t reach Khamis’ team or moved to other areas.

His team only began collecting samples from bodies three months ago, hoping that new training and DNA technology would be available to help identify them. That means only 1,600 bodies of the 5,200 found had samples taken from them before reburial. “We need a lot more,” he said.

In his offices in Raqqa, plastic bags carrying bone, teeth or hair samples were labelled and identified by location and number. International human rights groups say they are concerned local forensic groups are not getting the support, expertise and resources they need. Identifying the missing and preserving evidence for possible prosecutions is critical for Syria’s future, they say.

“The worst thing I saw in my life at these graves is a man who comes looking for his child and can’t find him,” said Hwaidi Munawakh, one of the gravediggers.

He has worked on nine of Raqqa’s mass graves. From one of them, he pulled out one of his cousins, a woman killed in an airstrike during the final battle for the city.

Photo: In this Saturday, Sept. 7, 2019 photo, a first responders takes a break after removing a body at the site of a mass grave in Raqqa, Syria. First responders say they have pulled nearly 20 bodies out of the latest mass grave uncovered in Raqqa, the Syrian city that was the de facto capital of the Islamic State group. It is the 16th mass grave in the city, and officials are struggling with a lack of resources needed to document and one day identify the thousands of dead who have been dug out. (AP Photo/Maya Alleruzzo)

Agony of Yazidi women torn between IS kids, or return home