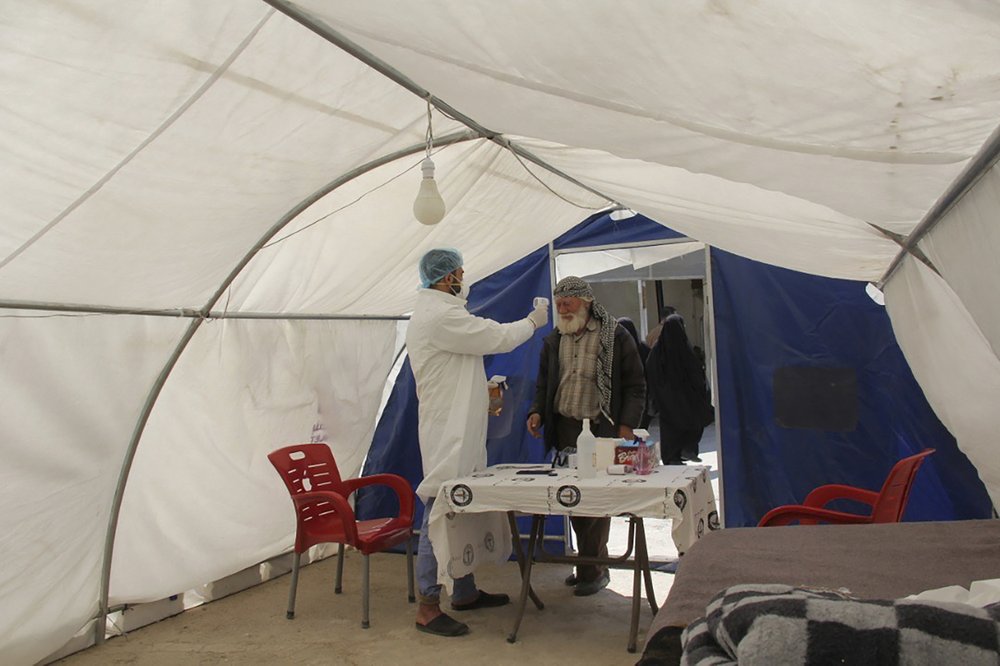 BEIRUT (AP) — After nine years of war, Syria is broken into three rival parts unable to work together and ill-prepared to cope with the coronavirus, an enemy that knows no conflict lines.

Medical personnel in Kurdish-run northeastern Syria have resorted to making protective gear out of garbage bags. The territory has been cut off from outside aid, including UN shipments that used to arrive from Iraq but were vetoed by Syrian government ally Russia.

In the last opposition-held enclave in Syria’s northwest, health officials are cobbling together what little they have to protect four million people crammed into a territory buckling under repeated government offensives. Promises by the World Health Organization to deliver ventilators, protection equipment and other supplies have mostly not materialized.

President Bashar al-Assad controls the rest of the country, including the main cities. WHO has steered most of its anti-coronavirus help through his government, forcing the UN agency to work with an opaque system that hasn’t extended help to non-government areas.

Hardin Lang, a former UN official and vice president of Refugee International, said the more vulnerable territories should be the priority. He said that working with a government that often distributes aid based on political considerations “could be questionable when you have a population that is completely dependent on you and cross-border assistance.”

Syrian authorities have conducted coronavirus tests only in Damascus’ central lab, making it hard to track infections. The Kurdish-run northeast, also home to four million people, has had to send its samples by plane to the capital.

The flaws of the system emerged last week when Kurdish officials found out two weeks after the fact that a death in their area was from COVID-19, the illness caused by the virus. The Damascus government did not officially announce it or inform local authorities — nor did WHO, prompting accusations by Kurdish authorities of a cover-up.

WHO says it is dealing with a global shortage and is working to raise resources for Syria, which it calls a priority area.

So far, Syria’s official count is 39 infections and two deaths, all in or around Damascus.

The civil war has devastated Syria’s health system. “Advanced countries were unable to isolate such a virus. So imagine a region that has faced a destructive war for nine years,” said Ciwan Mustafa, northeast’s health director.

Hundreds of medical facilities have been bombed, mostly in government airstrikes; half the hospitals and health centers are functioning only partially or not at all, while 70 percent of the medical personnel have fled the country. More than 80 percent of the population live in poverty, millions have been displaced and hundreds of thousands are crammed into overcrowded camps.

For weeks, government officials denied the danger. Shia pilgrims from Iran and Iraq continued to visit shrines near Damascus. Fighters, allied with the Syrian military, traveled back and forth from those countries.

By early March, restrictions began with a partial closure of borders and shrines. When the first case was announced on March 22, the government enforced a curfew and suspended military conscription. Several towns were isolated and over a dozen quarantine centers set up.

WHO is providing the Health Ministry with medical and lab equipment, testing kits, protective gear and training workshops, said Dr. Nima Abid, the agency’s acting representative in Damascus. It is setting up testing labs in the regions of Aleppo, Homs and Latakia.

Elizabeth Tsurkov, a Syria researcher, said that since the uprising began in 2011, Damascus has had a policy of denying aid to rebel-held areas and to the Kurdish-run northeast, in hopes of weakening the population there.

A 2013 polio outbreak was partially blamed on the government denying vaccinations to areas outside its control.

So far, WHO airlifted from Damascus 20 tons of supplies, including ventilators and protective gear, mostly to a hospital in a government-controlled pocket in the northeastern city of Qamishli. Those trying to reach the hospital risk arrest as they cross military checkpoints, Tsurkov said.

The northeast’s medical sector was further crippled by the war against the Islamic State group and Turkey’s military campaign, which restricted water supply. Tens of thousands of IS supporters and members are crammed in camps and detention facilities in the area.

UN aid deliveries from Iraq were halted in early 2020 after Russia vetoed a resolution allowing continued shipments across that border. The pandemic then forced the closure of the Iraqi border to almost everyone. Many aid workers left. Those remaining have negotiated only sporadic border openings with Iraq’s northern Kurdish semi-autonomous region, bringing in some supplies, including finally two testing machines.

In Syria’s rebel-held northwest, authorities have closed schools and mosques and urged people to stay home. That’s a challenge, when nearly one million people displaced in the latest government offensive now live in tents or temporary shelters without water or electricity.

WHO, consulting with Idlib authorities, drew up a US$30 million plan to create 28 isolation units and prepare three new facilities for coronavirus patients. But the agency has yet to bring the supplies. Thirty ventilators are sitting in Turkey, awaiting budget approval. WHO sent Idlib 5,900 test kits, and they are being closely rationed, used only in very suspect cases — 197 so far, all negative.

The WHO plan “is still mere words on paper,” the top health official in Idlib, Munzer al-Khalil, wrote in an open letter, accusing the UN of discrimination. “Even if northwest Syria is not an official state, its citizens are Syrians, first and foremost they are human beings and deserve an adequate response.”

He said WHO now wants to refit existing hospitals for COVID-19 cases instead of setting up new facilities, a change he feared would strain overstretched resources. Adding to the concerns, the UN resolution that allows cross-border aid from Turkey expires in June.

Al-Khalil used available resources to set up the only ward in the territory for suspected virus cases. The ward in an Idlib city hospital has only two doctors, four nurses, 32 beds and four ventilators, said hospital director, Dr. Khaled al-Yassin.

As al-Yassin spoke to The Associated Press, a father tried to bring in his 10-year-old son, feverish with a chest infection suspected of being coronavirus.

Al-Yassin had to turn him away.

“We don’t have isolation wards for children,” he told the distraught parent.

Al-Khalil said that over the course of the war, he has treated victims of chemical attacks and made life-or-death decisions about evacuating hospitals before a government attack.

The virus has brought new levels of stress, he said. “This time I feel it is much bigger than us.”

Image: This photo provided on April 12, 2020, by the Syrian American Medical Society, which has been authenticated based on its contents and other AP reporting, shows a nurse checking a man for fever and other symptoms as part of the effort to contain and trace the coronavirus, in a tent outside Idlib Central Hospital, Idlib, northern Syria. Nine years of war have broken Syria into three rival parts, and each is struggling to cope with a common enemy that knows no conflict lines. Unable to work together, their divisions are hurting frantic efforts to mobilize against the coronavirus in a country where the health sector is already devastated by war. (Syrian American Medical Society via AP)

As rebel-held Syria fears virus, just one machine is there to test