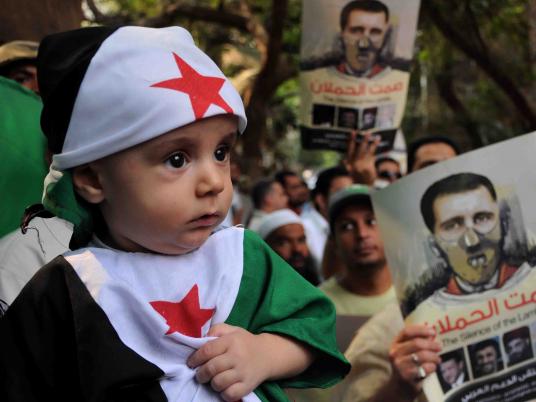 Syrian troops killed at least three people in Homs on Saturday, one day after security forces killed about 40 people in one of the deadliest crackdowns in months during the country's uprising.

The Syrian opposition's two main activist groups, the British-based Syrian Observatory for Human Rights and the Local Coordinating Committees, said shells slammed into the Baba Amr district of Homs. Raids and arrests also were reported around the eastern city of Deir el-Zour.
The popular revolt against Syrian President Bashar Assad's regime has proved remarkably resilient over the past seven months, with protests erupting every week despite the near-certainty the government will respond with bullets and tear gas. The United Nations estimates that the regime's crackdown on the protests has killed 3000 people since March.
The Syrian government insists the unrest is being driven by terrorists and foreign extremists looking to stir up sectarian strife.
The latest civilian bloodletting came on Friday as worshippers emerged from weekly Muslim prayers and swarmed streets in the central protest hub of Homs and other towns, urging a Libya-style no-fly zone to protect civilians and encourage army deserters.
The Syrian Observatory for Human Rights said security forces killed at least 36 people and reported that at least 17 Syrian soldiers were killed later in overnight clashes between troops and suspected deserters in Homs.
Friday's violence prompted a new stern warning from the foreign ministers of the 22-strong Arab League, which called on member Syria to stop the deadly crackdown on pro-democracy protesters.
"The Arab ministerial committee expressed its rejection of the continued killings of civilians in Syria and expressed its hope that the Syrian government will take the necessary measures to protect them," they said in a statement.
An Arab League ministerial committee on Syria met on Wednesday in Damascus with Syrian President Bashar al-Assad in a bid to spur a dialogue between him and the opposition.
Syria has largely sealed off the country from foreign journalists and prevented independent reporting, making it difficult to confirm events on the ground. Key sources of information are amateur videos posted online, witness accounts and details gathered by activist groups.
The regime appears to lack sufficient numbers of loyal troops to garrison all the centers of unrest at the same time, so government forces will often sweep through an area in the wake of protests, breaking up new gatherings and hunting activists, before being deployed elsewhere.
The result has been a months-long stalemate. Still, the capture and subsequent death of Libya's Muammar Qadhafi, under still-unclear circumstances, has energized the opposition. Last week, thousands of Syrians took to the streets shouting that Assad will be next.