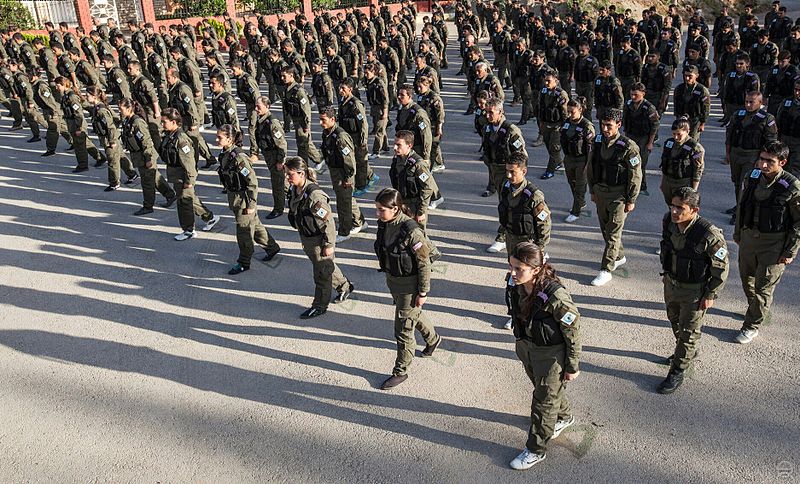 BEIRUT (Reuters) – The Kurdish YPG militia will pull forces and heavy weapons from a strip along Syria’s border with Turkey under U.S.-Turkish deals, an official in the YPG-led alliance said on Tuesday.

The YPG withdrew from the Tal Abyad and Ras al-Ain border positions in recent days, proving it is serious about ongoing talks, the Kurdish-led authority in north and east Syria said.

The withdrawal marks a sign of progress in talks between Washington and Ankara seeking to resolve deep differences over the presence along the border of Kurdish fighters – U.S. allies that Turkey sees as enemies.

After Ankara repeatedly warned it would launch a military incursion into northeast Syria targeting the YPG, Turkey and the United States said this month they had agreed on the first stages of a security deal along the border.

The two countries gave no details of the deal on what Turkey has called a “safe zone” inside Syria. It followed months of stalemate over how far the zone should extend into northeast Syria, still a main source of friction, and who should command forces patrolling it.

A senior Turkish official and a top Syrian Kurdish official said points of contention remained over the zone, which Turkey wants to extend 20 miles (32 km) into Syria.

The YPG spearheads the Syrian Democratic Forces (SDF) alliance, which controls much of north and east Syria. U.S. troops have been stationed in the region for years, training and arming the fighters who seized territory from Islamic State.

“These actions demonstrate a good-faith effort by the SDF that supports the implementation of the security mechanism framework,” said Commander Sean Robertson, a Pentagon spokesman.

“This plan maintains security in northeast Syria so ISIS cannot re-emerge and allows the coalition and our partners to remain focused on achieving the enduring defeat of ISIS,” Robertson said. ISIS is a commonly used acronym referring to Islamic State.

President Donald Trump said late last year he would withdraw the U.S. troops, sparking fears among the Kurds of a Turkish attack, but has so far held back from doing so.

U.S. support for the YPG has enraged Turkey, which deems the Syrian Kurdish fighters a security threat linked to Kurdish insurgents at home.

SDF spokesman Mustafa Bali told Reuters the strip along the border would vary between 5 and 14 km (3-9 miles) and include rural areas or military positions, not cities or towns.

The YPG and SDF will dismantle barricades there and hand over control to military councils of local fighters, he said.

Bali said Turkish and U.S.-led coalition forces would patrol the border strip but be based inside Turkey. The deal creates “a security mechanism, not safe zone, that assuages Turkey’s claims of fearing over its national security,” he added.

Senior Kurdish official Badran Jia Kurd said there was no “final deal yet as the talks are ongoing, and the threat remains.” He said the YPG move showed commitment to the agreements.

Ankara has already sent its military twice into northern Syria to drive the YPG from its borders in recent years.

A source familiar with the talks told Reuters that although Washington and Ankara were still discussing the extent of the zone, they agreed to start work on one stretch of the border.

“The safety mechanism arrangement is being implemented in phases,” the source said, adding that arrangements would vary at different parts of the border.

The source said U.S.-Turkish joint patrols would monitor the removal of heavy weapons, fortifications and tunnels, along with the YPG presence between Tel Abyad and Ras al-Ain, two Syrian border towns about 100 km (60 miles) apart.

That stretch is around a quarter of the whole border that could be covered by the zone.

A senior Turkish official said Ankara and Washington had bridged some, but not all, of their differences.

“There was a rapprochement, but our insistence on the 20 miles persists. The United States has taken steps to improve this, but they are still not enough,” the official said. “It is not possible for us to accept the SDF’s presence there.”

President Tayyip Erdogan said on Monday that Turkish ground troops would enter the planned zone “very soon,” after setting up a joint military center with Washington to oversee the operation at the weekend. Turkish drones and helicopters had already flown over the region, he said.

Erdogan said Turkey had prepared to carry out its own plans if its expectations were not met. As long as “provocations” continue from across the border, “it is not possible for us to wait with our hands tied,” he told Russian President Vladimir Putin on Tuesday.

Turkey, US work to create buffer zone in northern Syria

Syrian rebels say ready to back Turkish-led operation in northeast