As civilians in the Syrian city of Aleppo are battered by air strikes, ground offensives and shelling from both sides, what has happened to the world's responsibility to protect populations under threat?

The Geneva Conventions and the United Nations Security Council were established after World War Two to maintain peace and protect people in conflict zones.

But a 21st-century U.N. doctrine called Responsibility To Protect (R2P), set up by the world body's member states to prevent mass killings, has only had limited success.

Although formalised in 2005, R2P came about largely in response to the 1994 genocide in Rwanda, in which extremist Hutu militiamen slaughtered some 800,000 minority Tutsis and moderate Hutus.

The doctrine also stemmed from a desire to prevent a recurrence of atrocities like the 1995 massacre of 8,000 Bosnian Muslim men and boys by Serb forces in the town of Srebrenica.

It placed the onus on the international community to "use appropriate diplomatic, humanitarian and other means" to protect populations from crimes against humanity and ethnic cleansing.

Past examples include NATO's bombing of Serbia in 1999 as a means to protect the people of Kosovo and the U.N.'s administration of East Timor as Indonesian troops departed, experts say.

But now, R2P is a merely a "high moral aspiration" that has "floundered" on the complex realities of warfare today, according to Paddy Ashdown, a former British special forces officer and lawmaker who served as high representative to Bosnia and Herzegovina 2002 to 2006.

Ashdown, who was among Western politicians to call for military intervention in the war in Bosnia in the 1990s, said the world had become reluctant get involved in messy, protracted conflicts.

"R2P has diminished from a high hope into an interesting collection of words lying on the table," Ashdown said.

Ashdown, a former leader of the British opposition Liberal Democrats party, was speaking to the Thomson Reuters Foundation for a short film entitled "Responsibility To Protect?", which launched on Tuesday.

Conflict situations since the U.S.-led invasion of Iraq in 2003 have shown the West to be incapable of coming up with sound intervention strategies that protect civilians, Ashdown said.

The R2P doctine was applied in Libya, with NATO nations unleashing massive airstrikes against the military and infrastructure of Colonel Muammar Gaddafi in 2011. The assault was justified as an effort to protect Libyan civilians from harm during the Arab Spring, but the long-term result was chaos.

Since 2011, the United States, Britain and their allies have been criticised for failing to foster peace after Gaddafi's removal of Muammar Gaddafi from power. Islamic State took over the former leader's home city of Sirte a year ago as militants profited from the chaos that followed his death.

With R2P so clearly a failure in Libya, it's no wonder, some argue, that the doctrine of humanitarian intervention has lost its shine.

A deepening rift between Russia and the West, made worse by of the Ukraine crisis in 2014, has left the U.N. Security Council deadlocked in efforts to foster peace in Syria, where Russia backs the government of President Bashar al-Assad.

Syria's war erupted in 2011 after a popular uprising against the Assad family's more than four-decade rule that was inspired by the Arab Spring revolts across the Middle East.

The war, pitting rebels mostly from Syria's Sunni majority against a minority rule rooted in Assad's Alawite community, has killed more than 300,000 people. Half the population has been displaced and much of urban Syria has become a wasteland.

Western powers say Syria's government and its Russian allies are guilty of war crimes for targeting civilians, aid deliveries and hospitals. Moscow and Damascus say they target only militants, including the Al-Qaeda off-shoots such as Nusra Front that the West has been backing.

Despite the failure of R2P in Libya, Afghanistan and Iraq, there are still some who call for military intervention in Syria, among them Michael , academic and specialist on humanitarian intervention.

"Syria is a case that's begging for 'responsibility to protect' and no one is showing any responsibility whatever," said Ignatieff.

"So it's as relevant as ever, normatively, morally, in terms of our conscience, but it is a dead letter internationally," Ignatieff told the Thomson Reuters Foundation.

One problem is that R2P stems from a 19th-century concept of international relations that states should intervene "when a country is unable or unwilling to protect its own population", said Ghassan Salame, a former senior adviser to the U.N. secretary-general.

"But R2P has also suffered from a general decline of the ideological impact of the West on the rest of the world," Salame said in an interview.

Trust in the West's ability to resolve conflicts and build peace took a nose dive after R2P was invoked in Libya in 2011 to stop Gaddafi killing his own people, Salame and other experts said.

In March 2011, the U.N. Security Council passed a resolution endorsing military action to protect civilians against Gaddafi's forces. A massive bombardment of Libya followed, destroying the Libyan military and much of the nation's infrastructure, much like the "shock and awe" assault in Iraq in 2003.

The assault was justified as support for the Libya's "democratic" uprising of 2011, but it also convenienty accomplished a long-held ambition of the West: remove the troublesome Gaddafi from power.

The nation was flooded with weapons and foreign intelligence operatives, along with Islamist fighters from around the world, lending their support to the effort to overthrow Gaddafi. With the rule dead and the regime changed, Libya descended into civil war, split between two rival governments, one in Tripoli and one in the east.

However, while some see R2P as the cause of such chaos, others suggest the problem stems from the failure to follow through with more determined military intervention, including boots on the ground and a long-term foreign military presence in those nations that have seen regime change.

"In Libya we went in, we did the job, … (then) we walked away instead of creating a network including for instance Turkey which would have helped to reconstruct a peace in Libya. It's a bloody mess," Ashdown said.

Previous moves by the United States to depose governments or leaders in Afghanistan and Iraq during the presidency of George W. Bush, and, under President Barack Obama in Libya, are highly problematic for Responsibility to Protect, Salame said.

"This idea of regime change, that can be done clinically without touching the state structure, or without deconstruction of state society is, I hope, buried once and for all," Salame said.

After two failed ceasefire agreements between the United States and Russia to end the fighting in Aleppo, a new round of talks was set up in Geneva this month to include Saudi Arabia and Qatar, which support Syrian opposition groups, including those linked to Al-Qaeda.

According to many analysts, Gulf nations such as Qatar and Saudi Arabia have been key supporters of Islamic State, which has also been seeking to topple Assad.

"We do not live in a world, in which killing and dying remain safely confined within a sovereign state," Ignatieff said, pointing to the refugee crisis in Europe stemming from war and instability in the Middle East.

"Look at Syria, it's not just a lot of Syrians dying. It's decisively effected the stability and cohesion of Europe," the academic said.

For many observers, as well as those involved in events, the question remains whether the R2P doctrine provides an opportunity to fix problems and save civilians from harm, or simpy justifies more short-sighted military intervention, more regime change — and more long-term chaos. 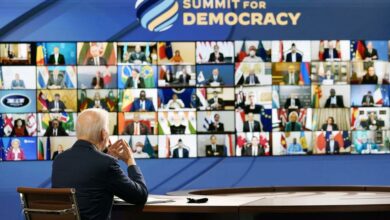 Biden to focus on elections, media as democracy summit wraps

Second round of Egyptian-Turkish talks will be held in Ankara