The death toll from a suspected chemical attack on a northern Syrian town rose to 72 on Wednesday while activists and rescue workers kept finding more terrified survivors hiding in shelters near the site of the harrowing assault, one of the deadliest in years in Syria's civil war.

According to a Syrian opposition group, renewed airstrikes hit the town of Khan Sheikhoun a day after the attack that the Trump administration has blamed on the government of President Bashar al-Assad, saying that his patrons, Russia and Iran, bore "great moral responsibility" for the deaths.

The UN Security Council was to hold an emergency meeting On Wednesday in response to the strike and in Brussels, officials from 70 nations gathered for a major donors' conference on the future of Syria and the region.

The attack on Khan Sheikhoun killed dozens of people on Tuesday, leaving residents gasping for breath and convulsing in the streets and overcrowded hospitals. Videos from the scene showed volunteer medics using fire hoses to wash the chemicals from victims' bodies. Haunting images of lifeless children piled in heaps reflected the magnitude of the attack, which was reminiscent of a 2013 chemical assault that left hundreds dead and was the worst in the country's ruinous six-year conflict.

Syrian doctors said a combination of toxic gases is suspected to have been released during the airstrikes, causing the high death toll and severe symptoms.

Pope Francis said Wednesday during his general audience that he was "watching with horror at the latest events in Syria," and said he "strongly deplored the unacceptable massacre."

British Foreign Secretary Boris Johnson said "all the evidence" he had seen so far in the latest chemical weapons attack in Syria "suggests this was the Assad regime … [that] did it in the full knowledge that they were using illegal weapons in a barbaric attack on their own people."

Syria's government denied it carried out any chemical attack. But early on Wednesday, Russia, a major ally of the Syrian government, alleged a Syrian airstrike hit a rebel arsenal, releasing the toxic agents. 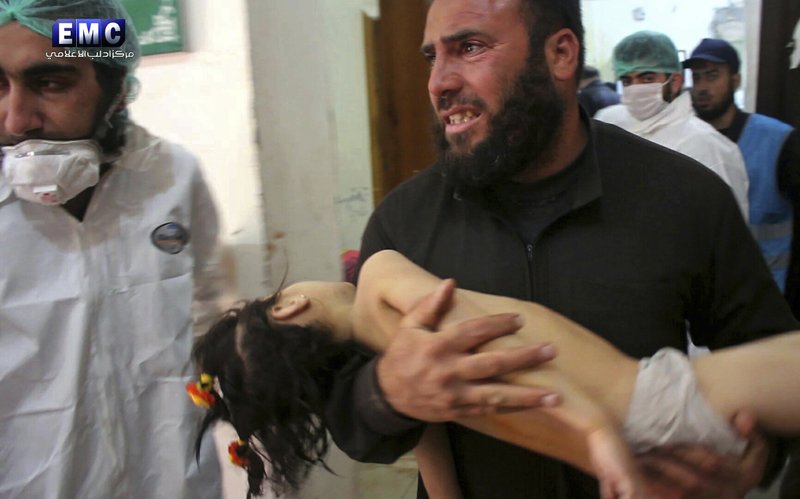 This photo provided on Tuesday April 4, 2017, by the Syrian anti-government activist group Edlib Media Center, that is consistent with independent AP reporting, shows a man carrying a child following a suspected chemical attack, at a makeshift hospital in the town of Khan Sheikhoun, northern Idlib province, Syria (Edlib Media Center, via AP)

The Russian Defense Ministry spokesman, Maj. Gen. Igor Konashenkov, said in a statement that Russian military assets registered the strike on a weapons depot and ammunition factory on the town's eastern outskirts. Konashenkov said the factory produced chemical weapons that were used in Iraq.

Wednesday's renewed airstrikes hit not far from the location of the suspected chemical attack, said Ahmed al-Sheikho, of the Idlib Civil Defense team. He said the strikes did not cause any casualties because the area had been evacuated following Tuesday's attack.

The Britain-based Syrian Observatory for Human Rights said 20 children and 17 women were among the 72 killed. Abu Hamdu, a senior member of the Syrian Civil Defense in Khan Sheikoun said his group has recorded 70 deaths.

He said his team of rescuers was still finding survivors, including two women and a boy hiding in an underground shelter beneath their home. 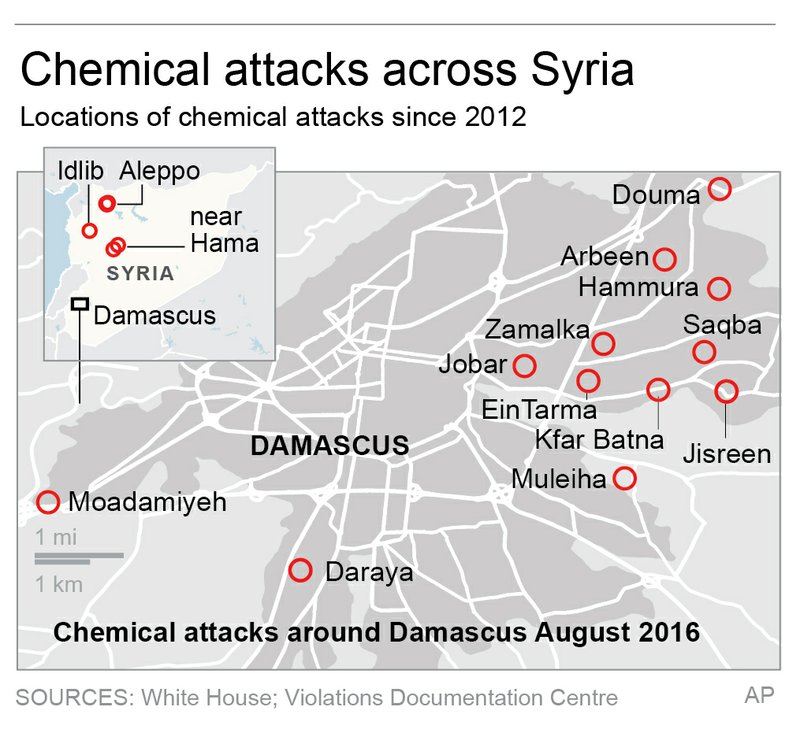