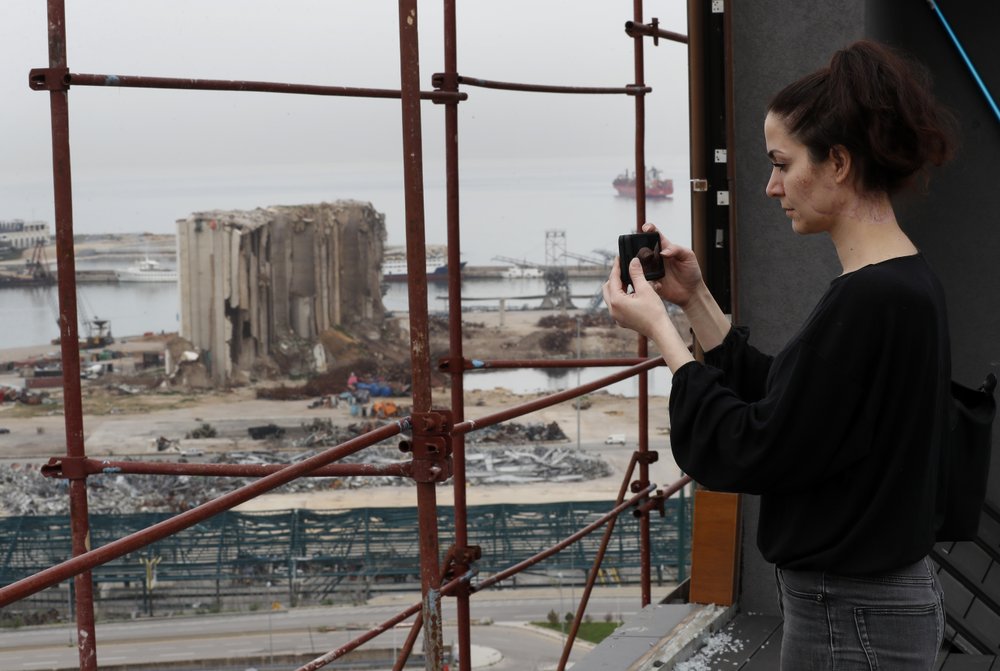 BEIRUT (AP) — Joana Dagher lay unconscious and hemorrhaging under a pile of rubble in her apartment after the massive Beirut port blast in August, on the brink of death.

She survived because of the courage of her husband who got her out, the kindness of a stranger who transported her in his damaged car and the help of her sisters during the chaos at the overwhelmed hospital.

But Dagher doesn’t remember any of that: The 33-year-old mother of two lost her memory for two full months from the trauma she suffered in the explosion, including a cerebral contusion and brain lesions.

“I lost my life on August 4,” Dagher said. “I lost my house, I lost my memory, I lost two friends,” she added, referring to neighbors killed in the explosion. “I lost my mental health, and so I lost everything.”

The Beirut explosion, which killed more than 200 people and injured more than 6,000, caused wounds on an even wider scale on the mental health of those who lived through it.

Dagher is gradually regaining her memory. But another kind of pain lingers.

Though therapy now helps, she said she no longer feels the same. Dagher is usually a calm and independent person, her sister Jihane said. Now she experiences bursts of anger and stress, emotionally shutting down and at times getting aggressive — all signs of post-traumatic stress disorder, according to experts.

“The past 6 months have been a purgatory,” Jihane said. “When you see someone you love suffer so much, everyone suffers with them, you are helpless.”

The blast was caused by a fire that ignited nearly 3,000 tons of ammonium nitrate stored in a port warehouse. One of the biggest non-nuclear explosions ever recorded, the force tore through the city, sending people flying across rooms and slicing them with flying glass. Windows and doors were blown out miles away from the epicenter.

Even in a country that has seen many wars and bombings, never had so many people — tens of thousands — directly experienced the same traumatizing event at the same time.

It came on top of the stress that Lebanese were already feeling from multiple crises, including an unprecedented economic meltdown, the coronavirus pandemic and a feeling of helplessness after nationwide protests against corruption that failed to achieve their goals.

“There are very high levels of anxiety and worry across the population,” said Mia Atwi, psychologist and president of Embrace, an organization working on mental health awareness and support. “There is a low mood bordering on clinical depression for the majority of the population.”

Demand for therapists has ballooned, making it hard to find treatment, especially since many qualified experts are leaving the country.

Embrace expanded its clinic after the explosion and still it has a 60-person-long waiting list. It has provided support for 750 people since the blast. Most are experiencing post-explosion symptoms, depression and anxiety, Atwi said. On Embrace’s helpline, 67% of the phone calls since August are from people in emotional distress, and 28% had suicidal thoughts.

The blast left mental wounds even in those it didn’t wound physically.

Najla Fadel, 33, was miraculously unscratched when the blast shattered the glass windows of her house, badly injuring her child’s babysitter. In the last months of her pregnancy with her second child, Fadel transported the bleeding woman to the hospital by herself.

She has since struggled with nightmares. She often wakes up, heart pounding, thinking the explosion has happened again.

“I jump at any sound and start looking for shelter,” she says.

The worst, she said, are thunderstorms and the sound of the Israeli warplanes that regularly violate and fly low through Lebanon’s airspace.

“A few nights ago, when planes were roaming above Beirut, I slept in the corridor,” she said. “This way I am halfway from my kids’ room, I can grab them faster and run just in case.”

Fadel saw a therapist for a while. Many others don’t get help.

“There are a lot of people neglecting their mental health or don’t know what to do,” said Souraya Frem, president and co-founder of Cenacle De Lumiere, an organization that after the explosion began offering free mental health support in Beirut.

“People are struggling with poverty, how to make ends meet and so they don’t see mental health as a priority,” Frem said.

From Perth, Australia, where she moved after the blast, Sarah Copland said she has been seeing two therapists to cope with her loss.

In the explosion, a shard of glass tore through the tiny chest of her 2-year-old son, Isaac, ending his short life. That day, she said, her life came to a standstill.

“My last image of my little boy is something a mother should never see,” she said. “That comes into my mind when I least expect it — we are going to do something, and it comes. It is very distressing.”

At the time, Copland was employed by the U.N. in Beirut. Thousands of miles from Lebanon, the memory haunts her.

“The sight or sound of broken glass gives me anxiety,” she said. “Lying in bed at night I hear the wind against the windows and that really freaks me out. I freeze up because it reminds of the whishing sound as the explosion came through our windows.”

Copland’s 2-month-old son Ethan keeps her going, she said, but the pain is deep. “Hearing children scream, even if it is in delight, takes me back to the hospital, to Isaac and to the children screaming in pain.”

Now in a temporary apartment outside Beirut, Joana Dagher decided to stay in Lebanon, despite the thousands who are leaving.

“I want to be close to those I love, to my family and I will not let those politicians remove me from my home or my country, I will stay here to see justice,” she said.

But like most survivors of that horrific day, there is a fear that never leaves her. “The fear of losing those I love is stronger than ever.”

Image; Joana Dagher, 33, who lost her memory for two full months from the trauma she suffered in the massive August explosion at the Beirut port, including a cerebral contusion and brain lesions, takes pictures of the explosion scene from her damaged apartment rooftop, in Beirut, Lebanon, Wednesday, Jan. 27, 2021. The mental health impact of the Beirut explosion that killed more than 200 and wounded more than 6,000 continues to lay its heavy weight on those who managed to survive the day. (AP Photo/Hussein Malla)