Sunday’s headlines were a cocktail of warnings of an escalation of violence, the arrest of a network planning armed attacks on Sinai and the formation of a “National Conscience Front” that will save us all from the unrest.

Being the state’s main and most read newspaper, it is slightly odd that Al-Ahram’s main story chose to lead with a Facebook statement by the infamous Black Bloc, who are apparently threatening a scheduled attack on the presidential palace on the anniversary of the ouster of Hosni Mubarak.

On 11 February, at exactly 3:30 pm, the Black Bloc will break into Ettehadiya Palace should Morsy choose to remain in power, their statement said as quoted by Al-Ahram.

Other headlines in Al-Ahram included the discovery of an anonymous dead body in front of Ettehadiya Palace and the detention of 93 rioters in different governorates following clashes that occurred over the weekend.

Al-Ahram and the other state-owned newspaper Al-Akhbar also report efforts by Prime Minister Hesham Qandil to tackle the disturbing sexual assault and harassment phenomenon, which include forming a female police force to protect women.

Al-Akhbar’s main story, however, reports on the referral of 26 defendants to a criminal court who were allegedly in possession of reports from Hamas’ armed wing, Al-Qassam Brigades. The reports included instructions on how to make home-made bombs and other explosives, Al-Akhbar reported.

Investigations allegedly showed that the defendants had plans to attack and invade Sinai and the Red Sea.

The newspaper also includes a special report on the plight of people living in Tahrir Square and Ettehadeya and their neighboring areas. The report suggests that the square has become a hotbed for thugs and outlaws, citing several complaints by companies that operate in the area.

The report also quotes Amira, a newlywed who apparently got married five months ago but only spent 25 days in her apartment, which is located near Tahrir Square, due to the smell of tear gas.

On the other side of the spectrum, independent Al-Dostour newspaper blatantly accuses the Muslim Brotherhood of attacking the gates of the presidential palace themselves with Molotov cocktails, under the supervision of the interior ministry — only to then turn around and arrest peaceful protesters on these very charges.

In a bold front-page headline, Al-Dostour suggests that civil disobedience is the only solution to the ongoing crisis, and that it will lead to the downfall of the regime in under three weeks.

Al-Dostour, along with independent Al-Tahrir, both offer comprehensive reports on what they referred to as “street battles” between protesters and security forces over the weekend in different governorates, including Sharqiya, Daqahliya, Alexandria and Beheira.

Al-Tahrir also offers an analysis of the ongoing protests, concluding that people will no longer stand for repressive regimes, while announcing the mass protests scheduled for Monday, with a mention of the Black Bloc’s plans to break into the presidential palace.

The independent newspaper also includes a reaction story to the 30-day YouTube ban stipulated by a court order on Saturday for showing a film insulting Prophet Mohamed. The article quotes rights groups who condemned the decision and deemed it a violation of freedom of expression.

An exclusive report in Al-Tahrir also details the harrowing accounts of girls allegedly detained and tortured by the Interior Ministry in protests that started on the second anniversary of the 25 January revolution.

The formation of National Conscience Front takes center stage in the Freedom and Justice Party’s newspaper, calling for the deployment of “political and moral” tools to solve the crisis.

The front, which was also reported on in state newspaper Al-Akhbar, includes public figures such as Ayman Nour and Mohamed al-Beltagy.

The newspaper quotes the front saying that it will stand against the regime or the opposition should one party deviate from achieving the goals of the revolution.

In the center of its pages, the Freedom and Justice Party lays out a very Cosmo-like “7 reasons why the National Salvation Front’s marches are failing.”

The newspaper allegedly quotes “Egyptian citizens” on the reasons behind the failure of the NSF’s protests, which include the people’s holding onto the legitimacy that came with Morsy, the prevalence of thuggery and harassment, the rampant violence and vandalism, the longing for stability, the low turnout in the protests and the scattered goals and slogans. 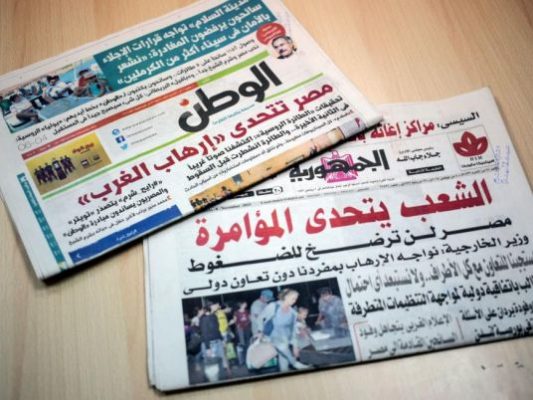