Egyptian weather is raved about throughout the world for being bearable all year round. But once the summer months decide to loom over, this feeling is reassessed, to say the least. The sizzling sun, the splish-splash of sea water, the insufferably hot taxi with teddy bears on its windshield, are undeniable icons of Cairo’s summer. Four artists, however, collaborated to give Cairenes a different interpretation of summertime: bold, colorful, and refreshingly experimental.

Mere meters away from the Nile, Lot 17 embraces paintings by Bahharaddin Adam, Fathi Afifi, Hany Rashed, and photographs by Amr Fekry in an exhibition dubbed Summertime. This quartet of artists innovated and adapted their work to flow with the summery theme, producing an assortment of compelling pieces.

On the pearly white walls of this petite gallery are color-infused photographs of Egyptian youth, splashing around in waters, looking underprivileged and yet full of life. Amr Fekry dabbed his previously black and white photos with tints of color, and strategically so, as he was aiming for more than a mere change in appearance.

In his collection of five photographs, Fekry reflects the youthful insurgency he believes is on the rise. “I want to inspire some vigor among Egyptians.”

When they were shot back in 2005, these photographs were black and white–but they still had a strategy of their own. “I was portraying Egyptians as a force which transcends eras.” Eternal and enduring, Egyptian adolescence inspired Fekry to zoom in and capture such irrefutable character.

Another inspiring force behind Fekry’s lens was motherhood. Among the collection is a photograph where a mother wearing an incredibly colorful galabiya baths her naked son. “The image of the mom and the baby dates way back to the pharaohs,” says Fekry. “The image of Isis (an ancient Egyptian goddess, worshiped for being an ideal wife and mother) carrying her son Horus is a mature and prominent icon of our culture.” The photographer seeks to reproduce such durable icons, yet in a more contemporary way.

As well as ancient culture, pop culture too is featured in Fekry’s photography. In the gallery’s window rests a photograph of a few young spectators shot from behind, watching passersby it seems, and mocking them for being in the heart. Red instantly grabs your eye–worn by one of the boys is a t-shirt of Michael Owen, a famous football player for the popular Manchester United. For many Egyptians, this sport where 22 players kick a ball around hoping to score a goal has become a comfortable escape from daily life. Fekry thinks this obsession, however, might be getting out of hand. “Our youth are brainwashed by football.”

While moving from the black and white to the colorful was Fekry’s summertime experiment, Fathi Afifi’s approach was reversed. Compared to his usually expressionistic, deeply colorful pieces, Afifi participates with two ink, color-less ones, through which he reveals his affection for the summer, beauty, and the beach.

One painting shows a group of people swimming and jumping in a sea–the ultimate summer experience. The second one freezes a woman’s figure surrounded by a world of sea and mountains, looking utterly female.

“I’m very much attracted to the sea–it gives me serenity.” And through his monochromatic experiment, Afifi reenacts the nautical atmosphere he adores.

Afifi used ink and glass to depict water, air, and everything in between. Aside from producing a lively and profound image of boys spraying themselves with water at the beach, playing around with materials was fun for the artist. “I sometimes feel like a kid toying around with different tools.”

Hany Rashed is another contemporary Egyptian artist who enjoys change as well as summer. Rashed interprets the film poster of “Asal Aswad” (Black Honey) a comedy starring the famous Ahmed Helmy. In his painting, Rashed changes the title to “Asal Abyad” (Honey). With a chuckle, the artist says “I changed the poster and made it more personal by adding my friends’ names.”

The film poster was Rashed’s chosen summer icon. “The summer movie poster has always been a very significant element symbol in our Egyptian culture.”

Rashed participated with two mixed-media paintings, this time revealing a slice of Western summertime. The two pieces build on pages ripped from foreign magazines, showing people reclining on faraway beaches. It catches your eyes, however, that their face and skin are painted plain white. The artist explains that blocking the features of westerners had to be done. “I do not understand this culture, and nor do most Egyptians. I could not paint what I do not understand.”

The most captivating color around emanates from the paintings of Sudanese artist Baharaddin Adam. Bold strokes reminiscent of the loud essence of summer take you in, inviting you to explore details hidden under layers of color and canvas.

Adam’s work explores the complex journey, or Al Nushoug, of an Arabic nomadic tribe called Bagara who travel each year in search of grass and water for their cattle. Adam seeks to record not merely this tribe’s movements, but their spirits too.

Summertime is a chance for change, for experimentation. If artists are doing it, so should you. Sunglasses on and mobile fan in hand, head down to Lot 17 anytime from today until 8 July, and explore the splash of color, and the lack of it. 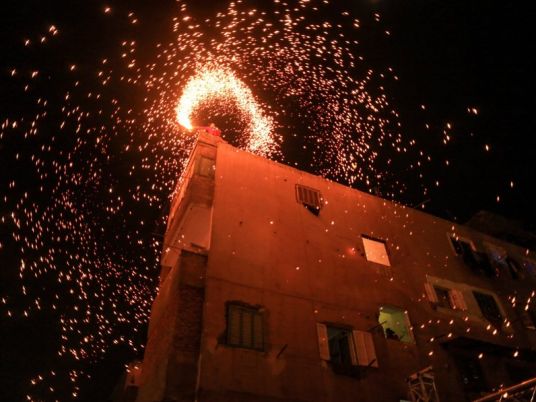 Stories of Change: Capturing the moment with revolutionary insight