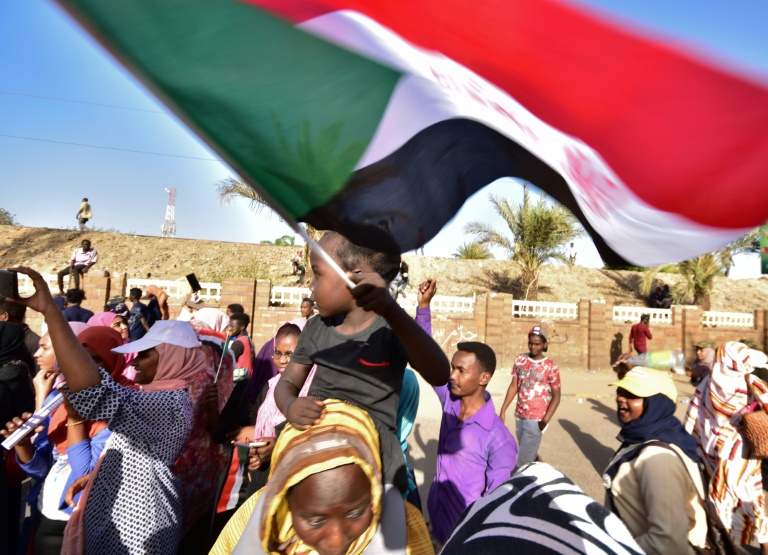 Thousands remained encamped outside Khartoum’s army headquarters overnight to keep up the pressure on a military council that took power after ousting veteran leader Omar al-Bashir on Thursday.

A 10-member delegation representing the protesters delivered their demands during talks late Saturday, according to a statement by umbrella group the Alliance for Freedom and Change.

“We will continue… our sit-in until all our demands are met,” including the formation of a fully civilian government, one of the alliance’s leaders, Omar al-Degier, said in the statement.

The umbrella group insists that civilian representatives should be accepted onto the military council, and that a fully civilian government should be formed to run day-to-day affairs.

“We surely want our demands to be met, but both sides will have to be flexible to reach a deal,” said a protester who spent the night at the army complex.

Burhan also pledged that individuals implicated in killing protesters would face justice and that protesters detained under a state of emergency imposed by Bashir during his final weeks in power would be freed.

He took the oath of office on Friday after his predecessor General Awad Ibn Ouf stepped down little more than 24 hours after ousting Bashir.

Tens of thousands of people have massed outside the army headquarters since April 6, initially to urge the armed forces to back their demand that Bashir be removed.

But while celebrating the fall of Bashir and then Ibn Ouf — a defense minister and long-time close aide of the deposed president — protesters remain cautious.

Rights group Amnesty International on Saturday urged the military council to examine Ghosh’s actions during a crackdown against protesters during the final weeks of Bashir’s rule.

“It is crucial that Sudan’s new authorities investigate Salah Ghosh’s role in the killings of scores of Sudanese protesters over the past four months”, said Amnesty’s regional director Sarah Jackson.

He also nominated Mohammad Hamdan Daglo — known as Himeidti — a field commander for the Rapid Support Forces (RSF) counter-insurgency unit, which rights groups have accused of abuses in war-torn Darfur.

One of the protesters taking part in the sit-in outside the army headquarters said he was ambivalent about Himeidti’s appointment.

“We don’t have many options — they (the RSF) have guns, they have money,” said Mohamed, who gave only his first name for security reasons.

“Himeidti was part of the crimes that happened previously but at least now he is on the side of the people,” he added.

Sudan is part of a UAE and Saudi-led military coalition fighting Iran-backed Huthi rebels in Yemen.

That marked a dramatic shift by Khartoum, aligning itself with the Gulf Arab monarchies and dropping close ties with their arch-rival Iran.

The International Criminal Court has longstanding arrest warrants against Bashir for suspected war crimes during the regime’s brutal campaign of repression in Darfur, where a decade-and-a-half of conflict has killed 300,000 people.

Amnesty demanded Saturday the deposed president be handed over to the Court.

But the military council has said it would never extradite Bashir or any other Sudanese citizen.

Khartoum erupts with joy as Bashir successor steps down