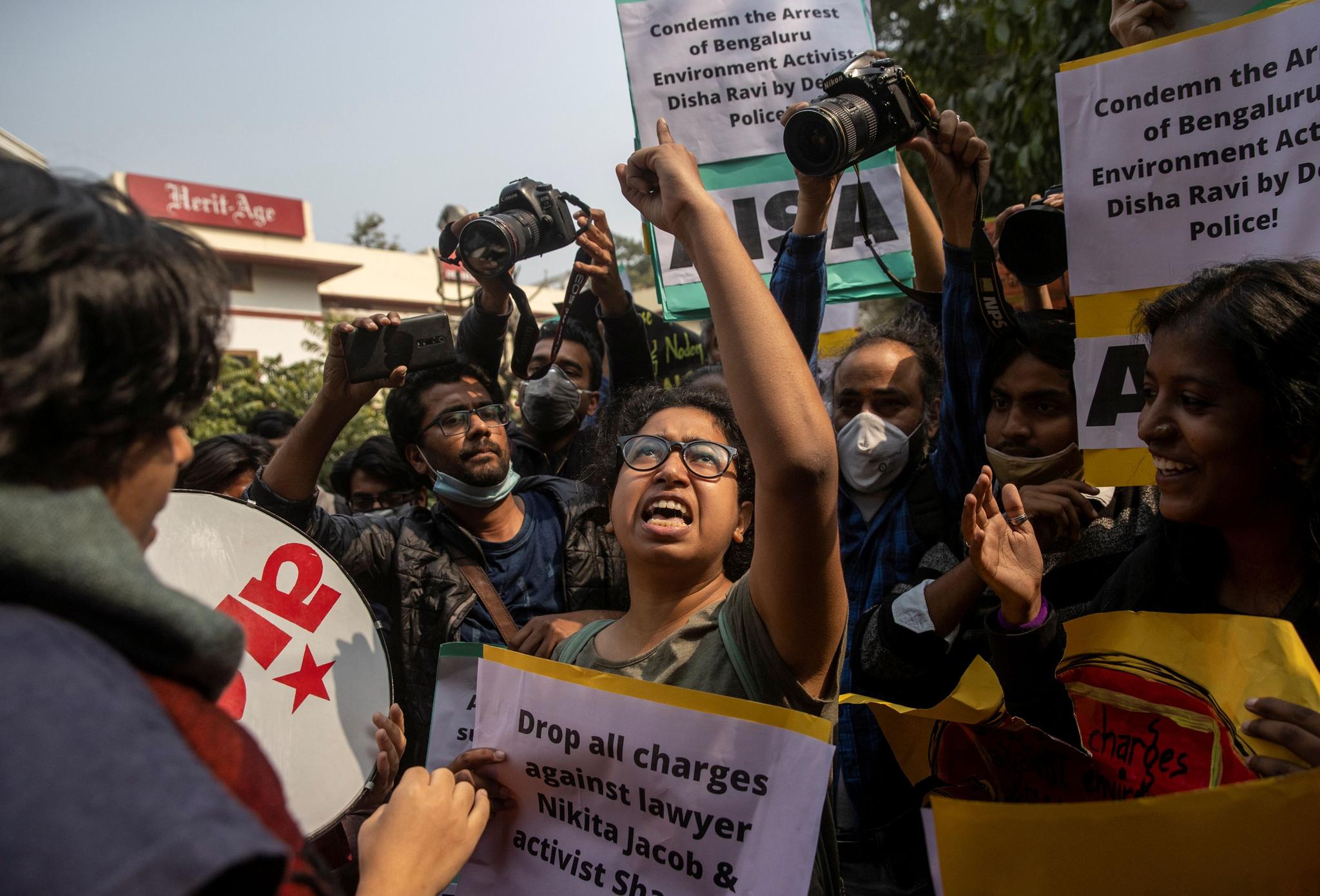 NEW DELHI (Reuters) – Students chanted slogans outside the Delhi police headquarters on Tuesday demanding the release of a 22-year-old environmentalist accused of sedition for an online document in support of farmers’ protests.

Police say Disha Ravi, a leader of the local arm of climate change campaigner Greta Thunberg’s advocacy group, created and shared a “toolkit” or an action plan that was used to foment violence in Delhi last month during the protests.

Her supporters have denied she did anything illegal and said the toolkit was an information pack about the protests, which erupted late last year to demand a rollback of three new agricultural laws, and was not designed to incite violence.

“The way the police took her away is illegal,” said Prasenajit Kumar, a leader of the student group which tried to march to the front gates of the police headquarters.

Riot police were on standby and the protesters were pushed back.

Her arrest in her hometown of Bengaluru on Sunday has stoked outrage and comes at a time when Prime Minister Narendra Modi’s government faces allegations it is suppressing dissent.

The government denies the charge and says people are free to protest if it is done peacefully.

Police said her detention was part of the investigation into the violence that took place on Jan. 26, Republic Day, when thousands of farmers tore down barricades and reached the historic Red Fort and raised a religious flag there.

“As far as Disha’s arrest is concerned, it was done as per the procedures. Law doesn’t differentiate between a 22-year-old and a 50-year-old,” Delhi police commissioner S.N. Srivastava said.

A lawyer for Ravi has declined to comment. Thunberg said on Monday that she had no comment on Ravi’s arrest.

Jacob, a Mumbai-based lawyer, has petitioned a court, seeking to block her arrest. The court was due to hear her petition later on Tuesday.

She said in her petition that she was trying to raise awareness about the plight of farmers protesting against deregulation of the produce market. There was no question of inciting violence, she said. Muluk could not be immediately reached for comment.

Thousands of farmers remain camped on the outskirts of New Delhi. The government says the new laws open up opportunities to farmers by allowing them to directly sell produce to private buyers such as large retailers.