Facebook Twitter LinkedIn
A quiet Cairean suburb, Maadi has been thought of as a hub for international expats as well as a tree-lined, villa-strewn haven for the rich and reclusive. Despite this lingering reputation, it has changed quite a bit over the 96 years of its existence. Planned out in 1905, it was home to the British and an army camp of New Zealanders during World War II, and now is home to a number of little neighborhoods such as Degla, Sakanat al-Maadi, Sarayat al-Maadi and New Maadi.
Maadi is accessible by the metro — line 1 — and its three stops are all located along Road 9 — a quaint street of stores and restaurants that has been the hub of old Maadi since the early 1900s. The street can be divided by metro stops, in fact, with the Hadayek el-Maadi station stopping at Road 9’s older and presently less affluent area.
Hadayek el-Maadi’s Road 9 is alongside a market area that bustles most days and nearly explodes with people on Fridays. Beyond the usual fresh fruits and vegetables, the Hadayek market is known for old furniture and home accessories. Just beyond the market area is a maze of small workshops where carpenters and upholsterers put together orders for clients or make samples to show on Road 9.
Al-Maadi is the next station on the metro line, direction Helwan, and is the center of life on Road 9. This is where Road 9 originated, and there are pictures from the 1950s and many stories about the street dating back to the 1920s when the street had few buildings and many gardens. Road 9’s first grocery store was Nile Cold Storage — the best place to buy British or Australian meat, fowl and other food items. The grocers that followed gathered around the metro station and hailed from Greece, Armenia and Cyprus, and the Road 9 community benefited from their specializations, histories and gossip.
“Road 9 was the home of Maadi’s first petrol station,” says Tarek, an older resident of Maadi. “It was the only one in Maadi and it was run by Socony Vaccum Mobil.” Other older residents have more stories of passed on ownership and of shops which used to exist on the street.
“Rano over there used to be a fashion boutique called ‘Angelle’,” explains Mohamed, an employee at Mishriky, a pharmacy on Road 9. “It was run by a man named Mr. Fouad.”
The road was also home to a historically famous dairy named Astra, the Slovak shoe store Bata, and Mr. Dimos, the street's long time grocer. The Gomaa brothers who stayed on the street into the 1990s have now been replaced by Abu Zekry.
As one continues down Road 9, past the newest Road 9 store, Alef Bookstore and Kiwi cafe, you’ll find a set of older shops, a shoemaker, an electrician and the Mermaid Pizzaria, Road 9’s first eatery. Beyond the intersection after that, what used to be a quiet residential area has developed quickly in the past 20 years. Between Mermaid’s and the final metro stop, Sakanat al-Maadi, one will find everything from Mori Sushi to a CIB branch, silver stores to McDonald’s.
Just before you reach McDonald’s — which in the 1990s was the main Maadi location for supposed ‘satanics’, young men and women who wore black and listened to Metallica — you will find Lucille’s, one of Maadi’s most familiar restaurants. Serving some of the best burgers in Egypt, Lucille’s used to be a second branch of Mermaid Pizzareia.
But the Road 9 of 2011 extends even beyond the final metro stop. Now Diwan has a branch a block further on and Adel, the tailor whose shop once sat alone on a deserted section of Road 9, is surrounded by little grocers and streetside mechanics.
“Maadi has become crowded and chaotic,” says Fouad Amin, owner of a store on Road 9 that is now Auntie Anne’s Pretzels. “It’s nothing like it was in the old days.” Amin cites Road 9 as a testament to that.
“Things have become so crowded that the road now has to be ‘one-way’,” Galal Massoud complains. The Massoud family are the new owners of corner grocery store and one of three dry cleaners on Road 9.
Since the 25 January revolution the cafes along Road 9 such as Beano’s, Greco, Coffee Bean and Marriott Bakery have come out onto the sidewalk with tables and chairs, no longer held back by Maadi’s baladeya (street patrols). “The baladeya would threaten us and make us pay bribes to put our tables and chairs on the sidewalk,” explains Heba, a waitress at the Coffee Bean. “Now Road 9 is ours again.”
If you want a nice coffee out in the sunshine, a street-side glimpse of Maadi life or a one-stop location to get a manicure, fix a shoe, copy a key, buy a book and grab lunch – Road 9 is the perfect venue. Just try to stay on the sidewalk.
Tags
lucille's Maadi maadi history road 9 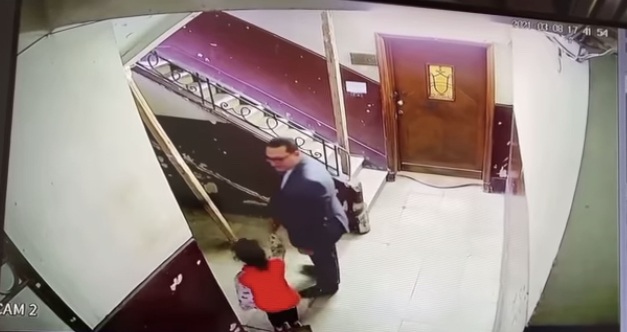