During the military council’s press conference on Monday about the recent violence around the cabinet building, Major General Adel Emara referred to protesters repeatedly as “the other side.” That description is a far cry from previous government statements about “courageous revolutionaries.”

Over the past 11 months, street activism has taken many different turns as a mechanism for change and an outlet for discontent, but the past week marks a low point for public perception of street protests.

Few Egyptians sympathized with the three-week sit-in at the cabinet building that preceded the clashes, and many lament the damage to public property.

Nonetheless, street activism will remain a powerful tool for effecting change, and many political leaders and activists say they will continue protesting, even — and especially — as the coming parliament is sworn in.

Emara was perhaps emboldened by the peacefulness and relative order of the election process, which bolstered the Supreme Council of the Armed Forces' (SCAF) standing with the public. But in the run-up to the first anniversary of the 25 January revolution, Emara might also have been attempting to use this momentum of popularity and high voter turnout to prevent the possibility of more people taking to the streets.

“We have to realize that peaceful tactics cannot continue against those who destroy the country; there's a difference between protesters and those who aim at destruction,” Emara said.

During the first two rounds of ongoing parliamentary elections, the country proved that it could carry out a peaceful democratic process. Still, many revolutionaries believe that parliament will not have enough power to enact much-needed changes without support from continued street protests.

“The legitimacy of street movements has not diminished in the least bit by the recent incident, besides being tarnished by SCAF statements,” said Shady Ghazaly Harb, a member of the Coalition for Revolutionary Youth.

Even some parliamentarians believe that despite their recent violent manifestations, street protests have a vibrant part to play in national politics.

“There is an active element of street activists who weren’t represented in the parliament because they are a minority. However, they will be a very important balance in case the coming parliament fails to fulfill the goals of the revolution,” said Mohamed Mahsoob, law dean at Zagazig University and a recently elected member of parliament from the moderate Islamist Wasat Party.

For Mahsoob, street protests and the parliament are two parallel tracks. He doesn’t believe that the cabinet incidents represent a departure from street politics as usual.

Other MPs seem to believe the same; 21 of them are holding a sit-in outside the Supreme Court building — along with 20 other activists and representatives of political parties — to call for the trial of the military leaders responsible for some of the past week's violence.

“Parliament members standing with protesters is the only way the duality of parliament and activism will remain effective. This is what the coming period needs: increased pressure from the streets and an activist parliament,” said Wael Khalil, a prominent political pundit and longtime activist.

The MPs who join the activists are against Emara’s statements, which demonized protesters and attempted to delegitimize the movement. Some see the verbal and physical attacks on protesters as part of a military tactic to stay in power by fostering instability, reversing the gains of both a parliament and protest movement that are pushing for real change.

“I think there are people inside the authorities — I don't know how high in rank — who don't want the elections to continue, creating a scenario where violence and instability can justify their power takeover,” said Samer Soliman, a political science professor at the American University in Cairo.

Khalil believes a vibrant culture of street protest will help avert such a scenario.

But not everyone thinks that the military, or even parts of it, had ulterior motives when they attacked the sit in.

“They just don’t know how to deal with such incidents any other way. Not that this justifies violations,” said Mostafa al-Sayyed, a political science professor at Cairo University. Sayyed doesn’t believe SCAF policy or patience has shifted regarding protests, and that the cabinet atrocities are just a product of the current circumstances.

But amid ongoing and surprisingly peaceful parliamentary elections, forthcoming presidential elections, a supposed deadline for SCAF handover of power to a civilian authority and a deteriorating economic state, some analysts are questioning whether street politics can continue to be the main tool for pushing change.

“I don’t think it would be possible to replicate the same kind of mass movement to instigate change as what happened before the ouster of [former President Hosni] Mubarak,” said Gamal Abdel Gawad. a researcher at Al-Ahram Center for Political and Strategic Studies.

The cabinet sit-in showed a fragmented activist community torn between whether to take to the streets or to give the elections a chance to materialize. Before the elections, clashes that began in Tahrir and ended at Mohamed Mahmoud Street dwindled until they only had sufficient numbers to move the sit-in to the much narrower confines of the street between the cabinet and parliament buildings. Public opinion, Abdel Gawad said, has shifted too far away from supporting street activism for it to remain effective.

High election turnout might have also swayed the public.

“More than 60 percent of people voted in the elections, showing that perhaps it is true that most people want to give the democratic process a chance,” Sayyed said, echoing an argument made in March after high turnout for a referendum on military-backed amendments to the constitution.

“Approval ratings for street movements have historically (this year) fluctuated depending on the clarity of the demands and the collateral damage (material or morale) caused,” said Khalil. Street protests now might not garner much support, but this doesn't necessarily indicate their future usefulness, he said.

Now, activist political movements and parties are standing against the military’s method of clearing the protesters, even though many of them were against the initial sit-in. As 25 January approaches, this discontent with the country’s current ruling class might drive many back to the streets, Khalil said.

“Besides the desire to ensure the democratic transition in June, which many of us are skeptical of. Violations by the military in dealing with street protests and other issues such as military trials means that coming period might bring many out to the streets again,” said Khalil. 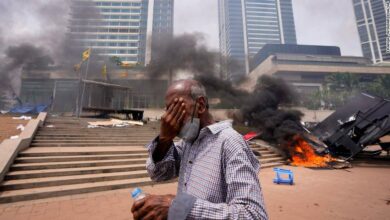