Safe shelter for stray dogs in Egypt’s streets is hard to come by; however, street dogs that risk extensive extermination campaigns from the government, through regular shootings and poisonings, now have ‘Hope’: an initiative launched by a group of young Egyptians to provide care for stray animals in Alexandria.

The group includes two young women based in Alexandria and one young man from Cairo. The young people were motivated to launch the initiative after witnessing a recent state-run campaign against stray dogs, which pushed them to decide to make a radical change in Egyptians’ perception of street animals.

Rodina Gamal, a teaching assistant at the faculty of Engineering of Alexandria University, described to Egypt Independent on Monday how she, along with her friend Menna Kotb, an invigilator at the British Council and Ahmed El Shorbagy, an engineer, launched their initiative under the name of “Hope Baladi for Rescue & Rehabilitation”. 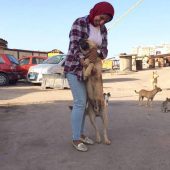 “These dogs are weak pets, animals, so I decided with my two friends to adopt an initiative that aims to improve Egyptians’ perception of these animals, makes the public aware that the current state-run campaigns against these animals are illegal and bear no relation to animal rights,” Rodina said.

On their main goals and the tasks they aim to accomplish through this initiative, she stressed that, beyond the humanitarian  intervention, their ultimate purpose is to make people aware that animals have feelings and sensitivity, just like humans.

Both Rodina and Menna informed Egypt Independent that their tasks through the initiative also include providing medical care for dogs in Alexandria’s streets; they explained that through street rounds they managed to sterilize a number of stray dogs.

“We believe that the only solution to avoid any danger from stray dogs is not to be found through killing them, but rather through sterilizing them … There is no reason why these animals should not be treated well and receive care from Egyptians; it is a matter of public awareness,” said Rodina and Menna.

Asked about how the initiative members apply their goals on the ground, both Rodina and Menna asserted that, besides launching street rounds to sterilize stray dogs in Alexandria, they are in the process of establishing an animal shelter over an area of 3,000 sqm, with the aim of providing safe hosting for stray street animals. 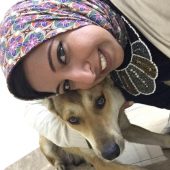 “The animals shelter planned to be established in Alexandria will be entitled ‘Hope’ in reference to the initiative’s name, we will establish it through our own efforts and the help of Menna, the daughter of renowned actor Hussein Fahmy who expressed interest in participating with us,” they added.

The ‘Hope’ initiative has also been extended outside Alexandria to include Egypt’s capital Cairo, where the third member of the initiative’s group, Ahmed El Shorbagi, has already started to execute sterilization campaigns on stray dogs. He is now seeking to establish similar animal safe havens in Cairo, Rodina and Menna explained.

Regarding any feedback from the government or the state on their initiative, they stressed that the current government is following an unmerciful and harsh strategy against street animals, especially dogs; because it believes that star dogs pose a danger for children and passersby and that they should, therefore, be killed.

“We have not received any help from the government, as it still considers stray dogs a chronic danger that should be eliminated.”

“Mainly, our initiative seeks to prevent the state-run campaigns that open fire against stray dogs” they stressed.

Through the planned shelters they hope to establish, Rodina, Menna and Ahmed are seeking to put street animals in a safe place, away from the state-run campaigns that open fire against these animals according to them; in addition, they will be able  to provide there all the necessary medical care.

On responses they have received from the public when they make their rounds to sterilize stray dogs, they confirmed that, while wandering streets in Alexandria and monitoring stray dogs to sterilize them, they faced different types of feedback from pedestrians.

“We usually use microbuses in carrying out the campaigns to sterilize the dogs; some pedestrians express no interest in what we are doing, while others, on the contrary, show sympathy and co-operation. We always target injured dogs to afford the appropriate treatment for them,” they explained.

On their future plans, they confirmed that they will continue in their efforts to sterilize stray dogs and spread awareness among Egyptians for the necessity of dealing with street animals in a proper matter.

US dollar price stabilizes in mid-trading for Egyptian banks