South African authorities have announced that the country’s military is preparing to mobilize around 25,000 troops to help bring a measure of calm, following days of violence and looting that have swept through KwaZulu-Natal and Gauteng provinces.

At least 72 people have been killed in the unrest which began following the imprisonment of former President Jacob Zuma. The politician was sentenced to a 15-month prison term in late June for contempt of court.

The country’s defense minister, Nosiviwe Mapisa-Nqakula, told parliament that troop contingents will be bolstered in the two provinces that have been most affected. Police and other security agencies have been battling to contain the situation, and have come under severe criticism for their apparent inability to restore order. 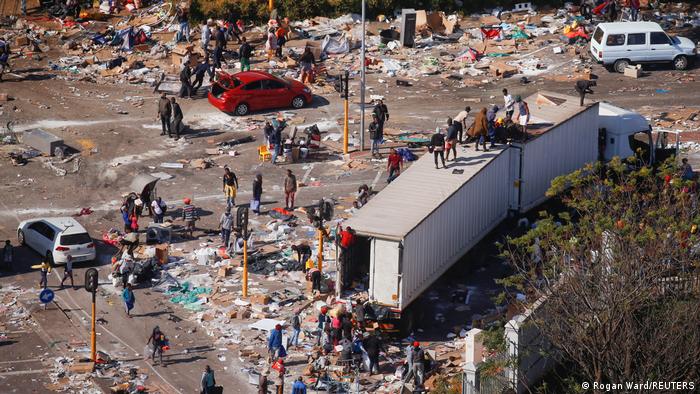 Police Minister Bheki Cele told local media that what was happening in the country had gone beyond just criminality. He said critical infrastructure had been targeted which, according to him, points to something far more sinister and orchestrated. Cele said that around 10 to 12 ringleaders face arrest.

Civilians set up roadblocks for protection

Instances of looting appear to have slowed somewhat in recent days, as security agencies try to get a handle on the situation. The Reuters news agency reported that there were still pockets of people looting in the coastal city of Durban.

Communities have tried to organize themselves into neighborhood watches with informal roadblocks at key entry points.

Reports indicate that tense calm has returned to parts of Johannesburg, as business owners survey the damage caused by days of rioting.

There are concerns that food and fuel supplies could begin to run out over the coming days.

Police have said over 1,700 people have been arrested since the violence first started last week.