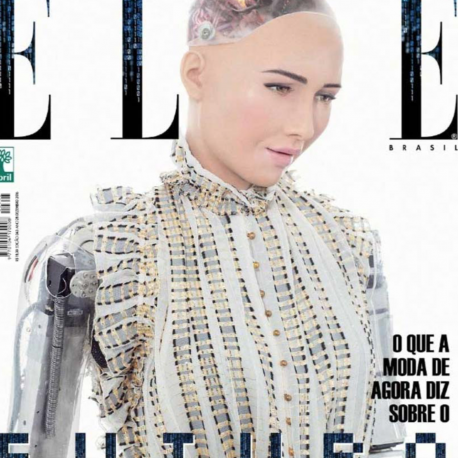 Sophia the robot, famous for becoming the first artificially intelligent (AI) robot to be granted a citizenship in history, will be visiting Egypt for the first time, according to the summit’s official website.

Sophia is known to be the closest replica of humans that AI has been able to create. Sophia was created in Hong Kong by Hanson Robotics.

The robot garnered worldwide fame for ‘her’ realistic proportions, from her ‘skin’ to the ability to express ’emotions’ through motors under her skin.

According to French news agency AFP, people saw the Hanson Robotics invention as the closest AI being to their own kind. She is the only robot capable of carrying out non-scripted conversations through sensors that collect emotional data.

But Sophia became famous not only for being the first robot to have conversations with humans, crowning years of research with impressive results, but also for her pithy, and sometimes slightly frightening comments.

The robot made her first debut at South by Southwest Festival (SXSW) in the United States in 2014. Since then Sophia has become a huge success: touring the world, appearing on shows such as the Ellen show, The Late Show with Jimmy Fallon, and being featured on the cover of Elle Magazine. Sophia even spoke at the United Nations (UN) and the World Economic forum in Davos. .

In an interview with Think Marketing Magazine, Amr Ashraf, a founding partner of Egypt’s Creative Industry Summit, stated that “we have always tried to bring whatever is new and a breakthrough in terms of technology. She’s been very successful, having recently spoken at the UN and Davos. So, we felt we should try to bring the most advanced AI to Egypt.”

The Creative Industry Summit was launched in Egypt in 2014 and aims to help Egypt catch-up to the AI industry that has swept the world, in an effort to boost the Egyptian economy.

Organised by Idea Bakers and The Worx, leaders in event-organizing and e-marketing, the summit focuses on the latest developments in the advertising, marketing and design fields in Egypt and the Arab world. The summit also aims to exchange experiences between experts from Arab countries and countries around the world in the latest developments in creative technology.

“The summit is the first of its kind in Egypt and the Middle East. It aims to discuss the most important developments in the creative industry, prepare participants for these developments and enable them to benefit their businesses,” Ashraf told Think Marketing Magazine.

This year, the summit will also feature Egyptian billionaire Naguib Sawiris and Dana Griffin, a neuroscience and marketing expert, as well as representatives of world renowned creative and media agencies, digital experts and advertising executives.