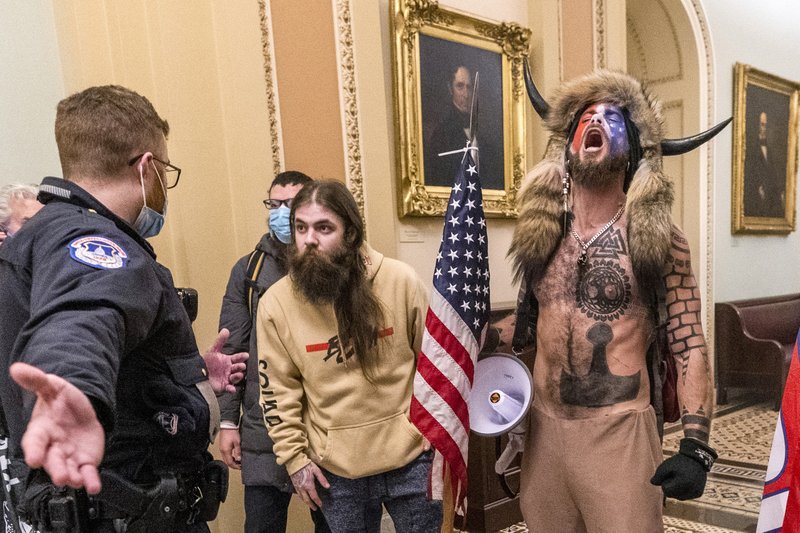 PHOENIX (AP) — The helmet-wearing Idaho man photographed dangling by one hand from the Senate’s balcony during the Jan. 6 riot at the US Capitol turned himself in six days later. While buckled in the vehicle delivering him to the Boise jail, Josiah Colt made a video apologizing and expressing shame for storming the building.

Jacob Chansley, the self-described QAnon Shaman who posed for photos on the Senate dais while sporting face paint and a furry hat with horns, also lacks the enthusiasm he once showed for the riot. A month later, he wrote an apology from jail, asking for understanding as he was coming to grips with his actions.

Confronted with compelling video and photographic evidence in court, dozens of rioters have apologized and expressed regret as the consequences of their actions have started to sink in. The ramifications include potential job losses, financial ruin and possible time behind bars.

“This is going to have consequences for these people for the rest of their lives — and it should,” said John Flannery, a former federal prosecutor and Capitol Hill lawyer.

Another possible consequence for Colt and others captured in photographs that went viral before they even left the Capitol building: ignominy beyond their lifetimes as those images make their way into history books.

A lawyer for Dominic Pezzola, who authorities say is a member of the extremist group Proud Boys and broke a Capitol window with a police shield, said in a filing that his client’s incarceration has placed his wife and two children in desperate financial straits.

Pezzola, the attorney wrote, was sorry for his actions, which included posting a video giving a triumphant speech inside the Capitol while smoking a “victory” cigar.

“Since his arrest, having time to reflect and see how things have revealed themselves, he now realizes he was duped into these mistaken beliefs ” that the election was stolen from President Donald Trump, Zucker wrote.

Colt, who had expressed devotion to Trump and called House Speaker Nancy Pelosi a traitor, seemed to recognize the long-term consequences of his actions in the Capitol in the minutes before his arrest as he spoke on the video, later posted by KBOI-TV.

“I never intended to do anything that would bring a black eye to my family, country, me,” he said, adding that he had received death threats.

Regret has struck some rioters sooner than others.

The day after Chad Jones allegedly swung a flag pole at police just outside the House chamber, he told a friend he was an “idiot,” adding he knew he was “in big trouble,” according to court documents.

He was right. A week later a federal complaint charged him with, among other things, using a weapon — the flag pole — to assault an officer. The charges carry a maximum 60 years in prison.

Samuel Camargo, who had posted a video on Instagram showing him tussling with police trying to get through a door to the Capitol, was on Facebook a day later with his apology.

“I’m sorry to all the people I’ve disappointed as this is not who I am nor what I stand for,” he wrote. Camargo, too, was charged.

It didn’t necessarily help his case. A judge ordered Camargo, who was arrested in Washington on Inauguration Day, jailed until trial after concluding no release condition could ensure Camargo’s future appearance in court.

As a procession of rioters ended up before federal judges, some issuing apologies before they got to court, it was impossible to discern who was sincerely sorry and who was expressing contrition in a preemptive bid for leniency from the court.

From behind bars after his arrest in March and with a bond hearing upcoming, 18-year-old rioter Bruno Joseph Cua penned a letter to his judge, assuring the court he was regretful and had been humbled by the experience. “Lesson fully received, your Honor,” Cua wrote, according to court documents.

Two months earlier Cua posted enthusiastic notes on social media saying he’d been part of history in joining throngs rushing the Capitol, charging documents say. He added in a sentence that jurors would likely take as an admission of guilt: “Yes, we physically fought our way in.”

Among the rude awakenings: No plea deals yet, though they may be in the works. Given it was an attack on what many regard as the citadel of American democracy, the sentiment among prosecutors, judges and the public at large, at least for now, isn’t exactly lenient.

Pezzola’s judge denied his request for bond, citing a potential danger to the community and saying Pezzola’s expressions of regret now can’t outweigh evidence that he “was willing to play an important role in an act of political violence.”

To date, more than 300 Capitol Hill rioters have been charged. Several are accused of careful planning and of coordinating the attack on Jan. 6. Most aren’t accused of committing violence or damaging property but of walking past security lines and entering restricted areas.

In most cases, there’s little dispute those charged did breach the Capitol building, having provided evidence of that themselves in selfies and videos posted online.

Edward Jacob Lang posted a photograph of himself in a crowd of Trump supporters pushing their way through a Capitol building tunnel, beating police as they went. He later went to the trouble of putting a finger emoji on the photo pointing to a fuzzy image of someone by the tunnel. The caption he included read, “THIS IS ME.” The photo was included in the Jan. 16 complaint charging him.

Some rioters, several speaking through attorneys, have said they went along with the flow of the mob and gave little thought to what they were doing until it was too late.

James Rahm said in a video statement before he was charged that he knew the second he stepped across the threshold of a Capitol door “the FBI was coming for me.” The 61-year-old said he was seized by the “passion of the moment.”

Psychologists have long observed how individuals in frenzied crowds seem to lose their sense of individual responsibility and become willing to engage in anti-social behavior they’d never contemplate on their own.

Courts are unlikely to allow lawyers to use the psychology of crowds as a defense at trial. It could potentially be raised at sentencing to try to explain how those with no previous criminal record ended up breaking the law.

Among the most well-known personalities in the Capitol riot to issue an apology is Chansley, the so-called QAnon Shaman from Phoenix who stormed the building while carrying a spear and expressed his disappointment with Trump, who had denied his pardon request.

In his apology, Chansley asked for patience for him and others who participated because they were “having a very difficult time piecing together all that happened to us, around us, and by us.”

“We are good people who care deeply about our country,” Chansley wrote.

A month later, a judge who denied Chansley’s bid to be released from jail had questioned whether the Arizona man was still under Trump’s spell, pointing out Chansley said in a CBS “60 Minutes+” interview that he didn’t regret his loyalty to Trump.

By JACQUES BILLEAUD and MICHAEL TARM

Image: FILE – In this Wednesday, Jan. 6, 2021 file photo, supporters of President Donald Trump, including Jacob Chansley, right with fur hat, are confronted by US Capitol Police officers outside the Senate Chamber inside the Capitol in Washington. Chansley made a written apology from jail, asking for understanding as he was coming to grips with his actions. (AP Photo/Manuel Balce Ceneta, File)

US narrows in on organized extremists in Capitol siege probe