Facebook Twitter LinkedIn
An Armed Forces soldier was seriously injured Sunday following an explosion at a mine in one of the military units in Ras Banas, south of the Red Sea Governorate.
Hossam Gamil, director of the ambulances facility of the governorate, received notice about the explosion and the injured soldier was quickly transported to a hospital in Marsa Alam. He was then sent to a Hurghada hospital, due to the seriousness of his injuries.
A claim was filed on the incident.
Edited translation from Al-Masry Al-Youm
Tags
explosion mine Ras Banas soldier

Lightning in the ‘cataclysmic’ Tonga volcano eruption shattered ‘all records’ 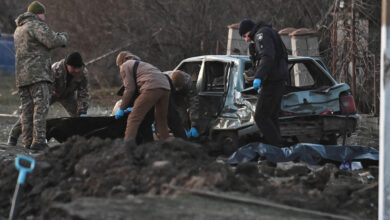 “I am fighting a noble fight”: Why some Russians have vowed to resist Putin’s invasion of Ukraine

Suspect in custody in Istanbul blast that killed 6 and injured 81, officials say