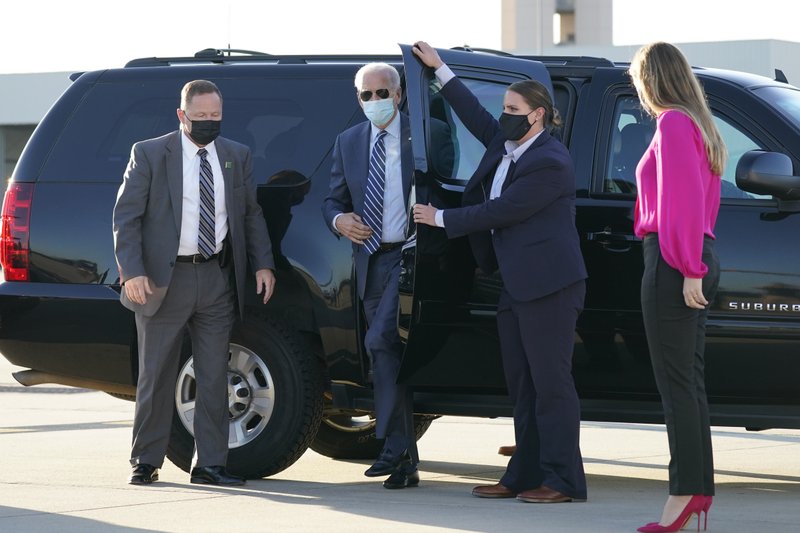 WASHINGTON (AP) — If Joe Biden defeats President Donald Trump next month, he’ll quickly face a new challenge: standing up a new administration to lead a divided nation through a series of historic crises.

After making Trump’s handling of the coronavirus pandemic a centerpiece of his campaign, Biden will have to show that his team can better handle the public health calamity. He will also have to contend with what Democrats say is the damage the Trump administration has done to the bureaucratic machinery in Washington, as well as low morale throughout the civil service.

And he’ll face pressure from liberals to deliver early wins with personnel and Cabinet picks to ensure their buy-in for his big policy fights to come.

With the election less than two weeks away, Biden and his aides are most focused on maintaining his advantage in polls against Trump. But some Democrats are beginning to prepare for the challenges that may swiftly unfold once the campaign is over.

“This will be one of the most important, most difficult and yes most costly transitions in modern American history,” Chris Korge, the Democratic National Committee’s finance chair, warned donors in a recent letter obtained by The Associated Press. “There is so much work to do.”

According to the Partnership for Public Service, a nonprofit organization that advises presidential candidates on the transition, Biden will have to name more than 4,000 political appointees to fill out his administration, including more than 1,200 requiring Senate confirmation. There are 700 key executive branch nominations that must go through Senate confirmation, 153 of which are currently vacant.

Chris Lu, executive director of President Barack Obama’s 2008 transition, said there are vacancies in some of the departments that will be key to addressing the country’s standing globally and the climate crisis.

“There’s a lot of expertise that’s just gone now — in particular, when you look at places like the State Department and the gutting of the Foreign Service or, you know, in climate agencies like EPA or Interior,” he said.

Launching a team to address the pandemic would probably be Biden’s top priority.

Chief among Biden’s first priorities as president will be moving quickly to address the pandemic. He would likely move quickly to announce Cabinet picks that would be key in the response, according to people involved in transition planning who spoke on condition of anonymity to discuss private conversations.

Those roles include leaders of the treasury and health and human services departments and the director of the National Economic Council.

Delaware Sen. Chris Coons, a longtime Biden ally and friend, is seen as a top contender for secretary of state, and he has been increasingly vocal about foreign policy in recent weeks. He wrote an essay in Foreign Affairs and participated in a recent panel discussion on the future of US foreign policy.

Biden is also expected to look to some of his former opponents and those he vetted as his potential running mate for top Cabinet positions.

Rep. Karen Bass of California, whom Biden considered for vice president, is seen as a potential housing and urban development secretary.

Illinois Sen. Tammy Duckworth, who was also included in Biden’s vice presidential shortlist, and former South Bend, Indiana, Mayor Pete Buttigieg, a former primary opponent, are discussed for secretary of veterans affairs. One person familiar with the transition planning said Buttigieg could also be an ambassador to the United Nations.

Other news reports have suggested Michèle Flournoy, a top adviser to two secretaries of defense under Obama, is a top contender for defense secretary, and former Michigan Gov. Jennifer Granholm is a possible energy secretary.

Massachusetts Sen. Elizabeth Warren, meanwhile, could be a candidate for treasury secretary, though she could face confirmation challenges, depending on the makeup of the Senate, if she’s seen as too progressive.

The Biden team is looking at a few other departments as opportunities to make history: There’s never been a female or a Black defense secretary, nor a Black interior secretary or female veterans affairs secretary.

Jeff Hauser, director of the Revolving Door Project, a progressive advocacy group geared toward putting pressure on Democratic administrations to appoint liberal nominees and top officials, said those picks will have potentially pivotal implications for the success of Biden’s first 100 days in office.

“The potential honeymoon for a Biden administration with progressives will be very short, if he is making impactful decisions that seem to augur four years of moderation in the face of things believed to be serious, a serious crisis,” he said.

Hauser said the left views Richetti and Reed as “really bad” picks because Reed is seen as a moderate and Richetti is a longtime lobbyist.

Zeints and Deese are similarly concerning for progressives; Hauser said they’d prefer Heather Boushey or Jared Bernstein, both of whom are current Biden campaign economic advisers, to lead the National Economic Council.

If Biden wins, it’s unclear how closely Trump administration officials would work with the incoming team. Alan Kessler, a prominent Democratic fundraiser, said he worries about the possibility that Trump could direct his top officials to resist sharing key details with the transition.

“When you have the president saying, ‘I’m not going quietly, and if I lose, it’s because it was rigged and there’s fraud,’ that’s a concern,” he said. “Is it going to mean the Biden campaign’s not going to be able to conduct the transition? No. But it will be a lot harder if the current administration doesn’t cooperate.”

Image: In this Oct. 18, 2020, photo, Democratic presidential candidate former Vice President Joe Biden steps out to board his campaign plane at Raleigh-Durham International Airport in Morrisville, N.C., en route to Wilmington, Del., as granddaughter Finnegan Biden looks on, right. Biden’s biggest challenge may begin the day after Election Day. If he wins, he’ll have just over 10 weeks to set up a new government. After making President Donald Trump’s handling of the coronavirus pandemic a centerpiece of his campaign, Biden will have to show that his team can better handle the public health crisis. (AP Photo/Carolyn Kaster)

Trump tends to his electoral map, Biden prepping for debate