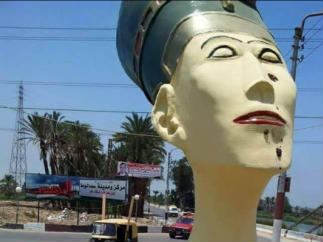 A rich vein of Egyptian artistic heritage can be seen in the great sculptures and statues located in the main squares of our cities, reflecting technical, professional and aesthetic quality.

These striking statues are symbols of culture and sources of inspiration. We think in particular of Mokhtar's modernist sculpture Nahdit Misr (Egypt's Renaissance), and the statues of the historical figures Talaat Harb, Naguib Mahfouz and Ibrahim Pasha — along with Abdel Moneim Riad and Mohamed Farid, to name but a few.

Whether these statues were created by Egyptians or foreign artists, their placement in public squares fills the streets with a resounding sense of urban history, broadens the horizons of passersby, educates and provides a source of great visual beauty.

When a statue is placed in a square, various dimensions and elements concerning the design of the square must be taken into account, such as the cognitive dimension, the social and visual aspects, and the general environment.

The method of sculpting and placing of a statue must also be considered in relation to its location — the base, size and ideal positioning of the object.

But now, some say, that tradition of tasteful public sculpture has been replaced by ugliness and disrespect for the figures depicted, a phenomenon that reflects a sharp decline in aesthetic value and a lack of artistic awareness.

One clear example of this is the statue of the late singer and composer Mohamed Abd el-Wahab in Bab al-Sha'riya in Cairo, which was recently painted yellow, gold and brown. This caused people to make fun of the artwork, while local officials sought to evade responsibility.

The statue of Om Kalthoum in Zamalek was also harmed by painting, with Tariq al-Komi, the creator of the bronze figure, saying it does not need to be painted.

Not only are good statues being painted badly, but many statues erected these days fail to meet the necessary aesthetic standards, displaying very often a lack of talent and artistic awareness on the part of the creator. One well-known example is the modern-day bust of Nefertiti in Minya that was roundly condemned as ugly, representing a slap in the face for the artistic output of Ancient Egypt.

“We are working all the time and watching the technical status of these statues like [police] informers, and when we find one, we inform the concerned authorities, so as to challenge the errors of municipalities that erect such malformed statues without reference to specialists,” Maati said.

He added that examples of these monster-like statues are numerous, including the aforementioned Nefertiti bust in Minya, the statue of Rifa'a al-Tahtawi in Sohag, that of Abbas Mahmoud al-Akkad in Aswan, and one of Ahmed Orabi in Sharqiya, which has been painted green from head to foot.

For his part, Mohamed Abo Se’ada, president of the National Organization for Urban Harmony, decried the marring of public spaces such as squares and streets, stressing that certain standards should be applied when local municipalities choose to erect a statue.

He also called on the concerned parties to co-operate as one team in the process of creating a statue and installing it.

Experts and plastic artists, meanwhile, say that ugly statues constitute an abuse of Egypt's history and do not conform with technical specifications — not to mention lacking in substance and forethought.

Mansoor al-Mansi, dean of the Faculty of Fine Arts at the University of Assiut, said the creation of ugly statues in public spaces is a "crime" against Egyptians, one that ruins the artistic sensibilities of the general public while undermining their cultural and civilizational awareness.