WOJSLAWICE, Poland (AP) — The Polish witnesses of the German crime in Wojslawice lived for decades with the memories of their Jewish neighbors executed in 1942. They remembered a meadow that flowed with blood, a child who cried out for water from underneath a pile of bodies, arms and legs that still moved days after the execution.

In the years that followed, those who had seen the crime shared their knowledge with their children, warning them to stay away from the spot behind the Orthodox church where some 60 Jews, among them 20 children, were murdered on that October day.

“When I was a young boy I was running around these meadows but the elders were saying: ‘please do not run there because there are buried people, buried Jews,’” said Marian Lackowski, a retired police officer whose late mother witnessed the execution in the small town in eastern Poland.

Born after the war, Lackowski has devoted years to ensuring that the victims receive a dignified burial, a mission he finally fulfilled Thursday as he gathered with Jewish and Christian clergy, the mayor, schoolchildren and other members of the town.

Beginning at the town hall, the group walked solemnly down a hill to the execution site, their silence broken only by roosters and barking dogs. After they arrived at the spot, church bells rang out from the town’s Catholic church and a trumpet called at noon. Jewish and Christian prayers were recited and mourners lit candles and placed stones in the Jewish tradition at a new memorial erected over the bones. “May their souls have a share in eternal life,” it reads.

The mass grave site in Wojslawice is tragically not unique. During the German occupation of Poland during World War II, the Germans imprisoned Jews in ghettoes and murdered them in death camps including Treblinka, Belzec and Sobibor. But they also shot them in fields and forests near their homes, leaving behind mass graves across Poland, many of which have only come to light in recent years.

Agnieszka Nieradko, co-founder of a Warsaw-based foundation devoted to finding the unmarked graves and securing them, said the large scale of unmarked graves started to become clear about a decade ago. The person she credits with their discovery is Zbigniew Nizinski, a Protestant man whose religious convictions led him to pay tribute to the Polish Jews who helped make Poland a multicultural land for the centuries before the Holocaust.

Nizinski, often traveling by bike, would go to small communities and ask local people where the Jewish cemetery was. The response was often: Did he mean the old prewar cemetery, or the unmarked wartime grave? Nizinski would then report his discoveries to the Rabbinical Commission for Jewish Cemeteries in Poland and created a foundation to help dedicate the sites.

Eventually the task was too much for Nizinski, and Nieradko and Aleksander Schwarz co-founded a foundation in 2014 under the auspices of the rabbinical commission to find and preserve as many Holocaust graves as possible, a race against time as eyewitness grow older and die.

The foundation is called Zapomniane, which means “Forgotten,” but Nieradko has since come to realize that forgotten doesn’t really capture the full truth of the unmarked graves.

Nieradko and Rabbi Michael Schudrich, the American-born chief rabbi of the country, frequently travel to communities for ceremonies dedicating new memorials at the sites. Nieradko says over 50 mass grave sites have been commemorated, 70 have been secured with wooden markers and she believes there are more still to be found.

Schudrich said ceremonies like the one Thursday in Wojslawice give the Holocaust victims their much-deserved graves, and offer a sense of closure to local people who witnessed the murders.

Some Jewish survivors and descendants also finally have a grave to visit. Schudrich recalled how one survivor in Israel returned to Poland for the dedication of a memorial where her mother and siblings were killed after she got separated from them at the start of the war.

“She just stood and hugged the matzevah (grave stone) because she never got to see her mother again,” he recalled.

The foundation uses ground penetrating radar, a surveying method called light detection and ranging, or LIDAR, and wartime aerial photos made by German army spy planes to precisely define the borders of the graves. But nothing is more important than human memory.

“If you don’t have a person to lead you to the grave, all those fancy tools are useless,” she said.

Nieradko says the sites of graves are found largely thanks to the testimony of the eyewitnesses. Their memories are often preserved by children and grandchildren.

Exhumations are never carried out because Judaism teaches that human remains are sacred and must not be touched.

After the graveside ceremony, the mourners moved to Wojslawice’s renovated synagogue, where the mayor paid tribute to the multiethnic nature of the prewar town, where Poles, Ukrainians and Jews lived side by side.

A man from nearby Chelm whose mother is Jewish stood up during the events to praise the tolerance of the local leaders, lamenting that is not the case everywhere.

Lackowski, who had worked many years to commemorate the burial site, expressed his satisfaction that the victims finally have a proper memorial.

He said that in his work he collected testimony from eight witnesses “who tell horrible stories that the meadow flowed with blood, that a child cried out for a drink from this pile (of bodies), that even after being buried for a few days, there were arms and legs sticking out of this pile that were still moving. It was something terrible.”

The few remaining eyewitnesses were mostly too feeble to attend the ceremony. Only 94-year-old Boleslaw Sitarz joined the town’s commemorations in the synagogue. He was 15 when he saw the Jews being lined up and taken to the spot behind the Orthodox church. “Screaming, shouting, lamenting did not help,” he said. After they were gunned down, he said, dogs came at night and scattered the bodies.

He expressed satisfaction that a ceremony was finally held to honor them. “These were our neighbors,” he said.

Nieradko says she and her foundation limit their work to where they are wanted. She has also learned of massacres where local people were involved in the murders, and there is less of a willingness to cooperate and have the spot commemorated.

“We choose sites where there is hope for putting a monument,” she said. “The difficult places we just leave for better times.” 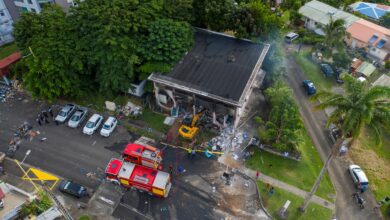 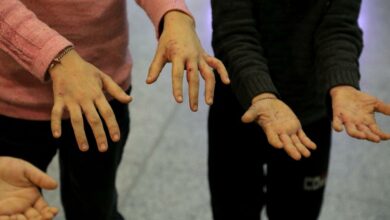 As Europe virus cases surge, UK plows on with its new normal