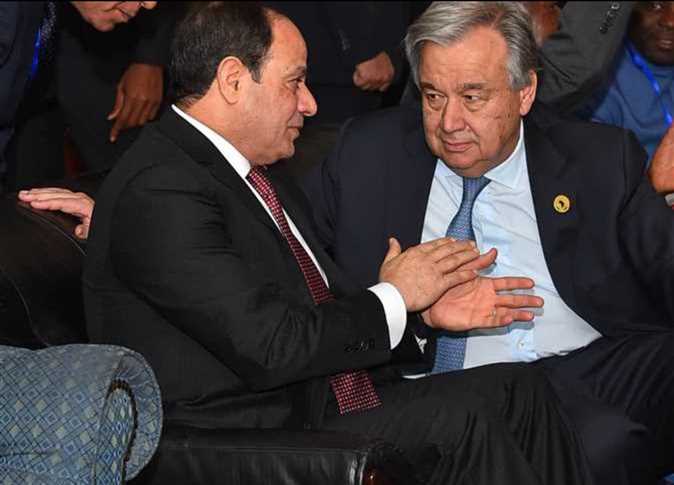 Egyptian President Abdel Fattah al-Sisi met with UN Secretary-General Antonio Guterres on the sidelines of the G20 summit in Osaka, Japan on Saturday.

Spokesperson for the Egyptian Presidency Bassam Rady, said that the President welcomed the meeting with Guterres, affirming Egypt’s support for the United Nations’ efforts at maintaining international peace and security, and promoting sustainable development efforts.

Guterres on his end expressed appreciation for the extended cooperation between Egypt and the UN, particularly with Egypt’s participation in the UN’s various activities.

He stressed Egypt’s central role in Africa and the Middle East, and the UN’s keenness to further cooperation with Egypt to establish development in its turbulent geographical environment, and consolidate foundations for peace and security.

Rady added that the meeting also discussed the latest developments on some regional issues, especially the situation in Libya.

Sisi affirmed Egypt’s foreign policy for this matter, which is based on the importance of preserving the unity and integrity of the Libyan state, safeguarding the capabilities of its people and supporting its national institutions to enable it to carry out its duties in maintaining security and combating terrorism.

Rady said that Sisi and Guterres agreed on continuing coordination and consultations between Egypt and the United Nations on this issue during the upcoming period.

Sisi: Security of the Gulf region is linked to Egypt's national security

Seven meetings for Sisi with world leaders at G20 summit

Sisi heads to Japan to participate in G20 2019 Summit