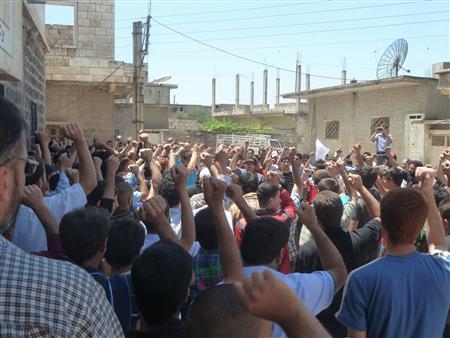 Eighteen people, including 12 women and children, were killed overnight by shelling in the Syrian town of Deraa, where the uprising against President Bashar al-Assad erupted 15 months ago, the Syrian Observatory for Human Rights said on Saturday.

Fighting was also reported in Damascus, Homs and other cities, killing 33 people overall on Saturday, the group said, showing neither side was respecting a UN-backed ceasefire, the failure of which has left outside powers divided on what to do next.

"We didn't sleep all night, the situation is a mess, all kinds of explosions and heavy weapons," said Adnan, a resident in the southwestern town of Deraa near the Jordan border.

"We could hear the blast from the rockets hitting in the neighborhood nearby. If we were afraid, you can imagine how afraid our children are," he said via Skype.

Two massacres of civilians in the last two weeks have added urgency to talks among foreign powers on what to do since the ceasefire, supposed to take effect on April 12, has failed to stop the violence.

Russian Foreign Minister Sergei Lavrov said Moscow — which has shielded Assad from UN sanctions pressure — was not opposed to his departure, but only against that outcome being imposed on Syria from outside.

"If the Syrians agree (about Assad's departure) between each other, we will only be happy to support such a solution," Lavrov told reporters. "But we believe it is unacceptable to impose the conditions for such a dialogue from outside."

Lavrov was speaking one day after his deputies held consultations with US special envoy Fred Hof, in Moscow to push for a transition in Syria that would see Assad leave power.

Lavrov reiterated his call for an international conference in support of the envoy Kofi Annan's failing peace plan and said "there was no outright rejection" of this initiative from the United States expressed during the Moscow talks, despite Russia's recommendation that Iran take part.

"We want this event to be effective. In order to be effective all the sides with any influence on the sides in the Syrian conflicts should be represented there. Iran is one such country," Lavrov said.

US Secretary of State Hillary Clinton said on Wednesday it was "hard to imagine inviting a country that is stage-managing the Assad regime's assault on its people".

Tehran denies Washington's accusation that it is helping the Syrian government and pro-Assad militia to put down the uprising.

Highlighting the sectarian tensions that have grown during the conflict, rebels holding 11 Lebanese Shia Muslim pilgrims hostage said they would release the men when their country had established a new "civil state", a video obtained by Al Jazeera television showed.

"The guests will be released by the Syrian civil state when their case is reviewed by a new democratic parliament," the rebels said in a written statement on the video in which the hostages appeared, apparently in good health.

But the statement left room for negotiations, saying: "Given the current conditions it may be possible to negotiate their release with neighbouring countries."

The hostages were on a bus that was stopped by gunmen as it crossed into northern Syria from Turkey on its way home from a pilgrimage to Shia Iran.

The revolt against Assad has been led mostly by Syria's Sunni Muslim majority. Many say their interests have been crushed under Assad who is from a minority Alawite sect considered an offshoot of Shia Islam.

UN monitors are still working to understand what happened in the hamlet of Mazraat al-Qubeir, where opposition activists say at least 78 people were massacred on Wednesday.

The monitors saw empty homes covered in blood and smelled burnt flesh when they visited on Friday.

Armoured-vehicle tracks were visible in the vicinity and some homes were damaged by rockets from armoured vehicles, grenades and weapons ranging in caliber. Only the Syrian army has armoured vehicles and heavy weapons.

The incident happened two weeks after a massacre in the town of Houla, killing at least 108 men, women and children, which the United Nations said seemed to be the work of Syrian government forces and allied militias.

In the capital Damascus, once a relatively safe Assad stronghold, loud explosions were heard overnight after residents reported some the fiercest fighting between rebels and security forces a day earlier.

UN monitors who visited the site of fighting released a video showing shattered storefronts and six torched and blackened buses. They said some buildings appeared to have been hit by rocket propelled grenades and saw the body of a Syrian soldier on the street.

In Homs — centre of the armed insurgency where the rebellious Baba Amr district was razed by security forces in March — activists reported some of the worst shelling since then.

Some posted pictures of bullet-scarred buildings ablaze. Video uploaded by activists showed clouds of dust and flames bursting from concrete buildings as heavy blasts rocked the old city. The images could not be verified.