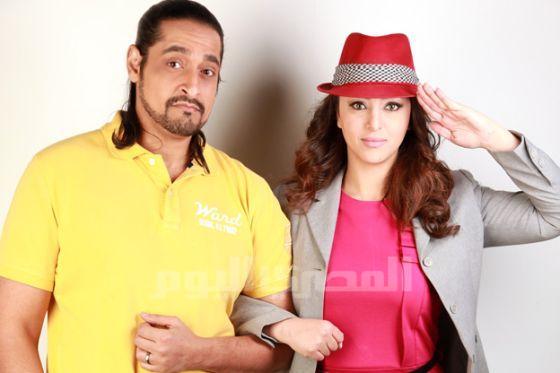 In their sunny, ultra-modern living room, Shady sits on his laptop as Nayrouz comfortably sips her coffee and Omar, their 1-year-old son, naps in his room. This typical picture of normalcy has become a luxury for the young couple since they agreed to star in MBC’s Reality Show, “Heya w Howa.”

For five consecutive months, Shady Hamza and Nayrouz Abu Zeid were shooting their reality series, showing now on MBC4. The young couple hosted a crew of almost 15 people on daily basis for up to 16 hours a day.

The young couple starts their day with giving the story producer a schedule of their daily activities, errands, work or special events so that the shooting unit is prepared for any indoor/outdoor possibilities. According to the young couple, the possibility of canceling a day of shooting is close to nil.

“For four days, we were all sick and feverish, but the crew was still filming and walking around our house wearing masks,” says Hamza.

“Because it such a huge production, we are cornered,” says Abu Zeid. Everything the young couple does has to be filmed except for bedroom material out of respect for the couple and the viewers of the Arab world.

“I swear to God, the amount of times I had to swallow tears are countless,” adds the young wife.

She says there are many layers to the final version presented on screen, including days of stress, long shoots, arguments and fights.

“I live with a microphone on me that I am only allowed to turn off in the bathroom,” explains Abu Zeid.

There were days when the couple was shooting the musical segments in the studio simultaneously followed by the regular shooting.

“We shot 12 video clips in a week,” says Hamza. Such an intense shooting schedule took its toll on the couple’s professional lives.

According to the couple, Season 2 is a bigger production because it is aired to a bigger audience on MBC4.

“They are depending on us to kick it,” says the young husband.

“At the end of the day, you need to enrich the episode and create the mini-suspense the audience is looking for,” explains Abu Zeid, saying this can be extremely stressful.”

The couple also struggles with the level of normalcy in the show.

“We need to look and act normal with all these people and cameras with us in the same room,” Abu Zeid adds.

Aside from the technical and artistic sides of the production, there is also the stress of the timing of the show, four months post-revolution. The young couple faced the challenge of presenting a show different from what is being aired on TV about Egyptians and their daily struggles, and at the same time respectful of the current situation of the country.

“There had to be glam and some moments of superficiality because that is the kind of stuff that keeps people coming back to the show,” says Abu Zeid.

According to the couple, the show is resonating well in North Africa.

“I got gifts from Morocco,” Abu Zeid says.

Hamza’s first song in Arabic aired on the first episode of the show has 20,000 hits on YouTube so far. However, the couple needed to face another type of stress, which is negative feedback.

“We were told while signing the contract that a lot of the criticism might be negative,” says the young lead singer.

“There is a crisis management department hired to make sure that we don’t commit suicide,” says Abu Zeid.

The young couple took the responsibility of explaining the concept of reality TV to a large Arab audience that still considers “Heya w Howa” a soap opera and sees the two stars as two young actors.

“It is a new concept and people are still getting around it,” concludes Hamza.

“We don’t regret being in a reality show, but as an experience, it took a lot out of us,” says Hamza.

The young couple gave their life to a third party to edit. Abu Zeid said it is a huge risk to take part in such a show because, as a couple, you might not be strong enough and close enough to make it to the end.

“There are things I would have done differently,” she says.