Facebook Twitter LinkedIn
Two years after the controversial sexual harassment case of Somaya Tarek Ebeid, known in popular media as the “Heliopolis mall girl”, the same harasser stabbed his old victim in the face on Sunday, as revenge for filing a complaint against him.
The incident goes back to October 2015 when Ebeid published a post on Facebook that claimed she had been sexually harassed by a man in a Heliopolis mall. She said that the man slapped her after she verbally defended herself.
Ebeid said she then filed a claim at the police station but the officers did not offer to help, so she resorted to speaking with the media. Ebeid published a video of the incident, recorded by the mall’s surveillance cameras.
The video shows a man talking to Ebeid then slapping her on the face before security personnel intervened to prevent him from hurting her further.
In an interview with Al-Masry Al-Youm (AMAY), Ebied blamed Egyptian society for not defending her against the harasser, and placing all the blame on her. She expressed dissatisfaction at the weak punishment given to her harasser, who was sentenced to two weeks in prison. The perpetrator was acquitted of the sexual harassment charges.
Ebeid recounted the incident to AMAY saying it was, “3 PM [on Sunday], as I was entering a pharmacy. I was surprised by someone calling my name. When I looked back, I found the person who (previously) harassed me in the mall. I entered the pharmacy quickly, bought medicine, and then tried to run to my car before he caught me. But he ran after me and stabbed me with a knife. He was tracking me after he left prison in preparation for the attack.”
“The defendant caused a 20 cm deep facial wound that required 50 stitches. I underwent a LE 60,000 surgery with the financial help of some friends,” she said, explaining that her face will require at least six cosmetic surgeries over the span of a year to return to normal.

“I never thought he would keep track of me for two years and try to slay me in broad daylight with such perseverance,” she continued.

He probably had an agreement with someone to monitor me and then tell him my whereabouts, Ebeid hypothesized.
“I lost my future because of him. I need six cosmetic surgeries to get closer to my natural facial structure over the course of a year. I lost my family and my reputation, because my family renounced me after the first incident. I also left my university because of the incident,” Ebeid said.
Ebeid said she felt the defendant was no different from a terrorist who kills and slays others, and demanded that the judiciary be more deterrent in sexual harassment incidents.
The victim said she was afraid of society, as people would blame her and describe her in vulgar terms, after her face got distorted.
Chairperson of the Egyptian Feminist Union and founder of the Alliance for Arab Women, Hoda Badran, told Al-Masry Al-Youm that the stabbing incident against Ebeid confirms that the two-week prison sentence brought against the man in court was not a deterrent. He should have been sentenced to two years in prison over sexual harassment in accordance with the law, she pointed out.
“We need a law to protect women from violence and to harshen the punishment of sexual harassment and rape,” she said, adding whistleblowers and witnesses should also be well-protected by the law.
According to Badran one of the main causes for the spread of sexual harassment and rape is drug abuse, who said counter-drug abuse awareness campaigns and crackdowns by the police are required measures because most addicts are harassers.
On Monday Cairo was reported as the most dangerous megacity for women worldwide by Reuters, according to an international poll.
Edited Translation from Al-Masry Al-Youm
Tags
court harassment heliopolis sexual harassment Somaya Tarek Ebeid stabbing vengeance violence against women 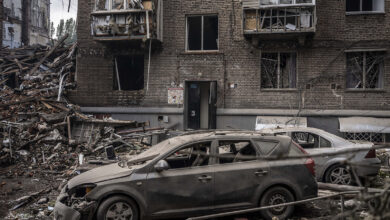 Analysis: Putin’s rage against civilians may herald a brutal new phase in the war