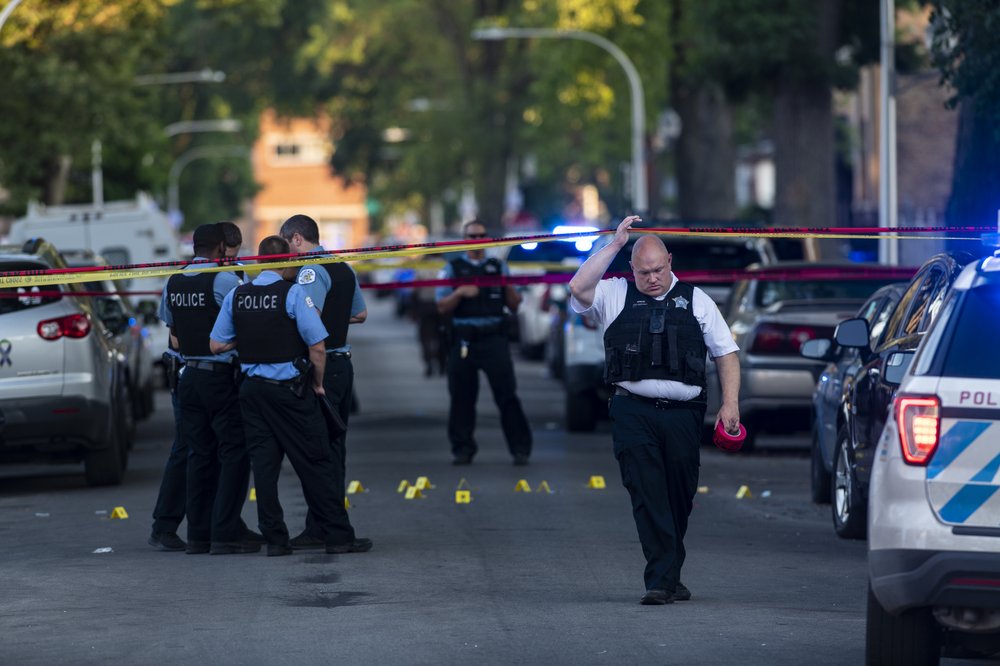 A six-year-old computer whiz. A young mother working for a better home for her kids. An eight-year-old who loved to make dance videos.

From San Francisco to South Carolina, a spate of shootings claimed the lives of people celebrating or just taking a drive over the Fourth of July weekend. Chicago saw one of its bloodiest holiday weekends in memory, with 17 killed and 70 wounded by gunfire. The incidents come amid fears the coronavirus pandemic, protests against racism, rising gun sales and an election year could make for a particularly deadly summer.

Here’s a look at some of the victims from this weekend.

‘SHE DIED IN MY ARMS’

Secoriea Turner should have been making TikTok videos on her phone Sunday evening, her mother said.

Instead, Charmaine Turner appeared before reporters with Atlanta’s mayor and interim police chief to plead for anyone with information about her 8-year-old daughter’s death to come forward.

Secoriea was riding in a car with her mother and another adult just before 10 p.m. Saturday. They exited the interstate and tried to enter a parking lot when they were confronted by “a group of armed individuals” blocking the entrance, police said. Before the driver could make a U-turn, shots were fired and Secoriea was hit, Turner said.

“She died in my arms,” Turner said.

The shooting happened near the Wendy’s where Rayshard Brooks, a Black man, was fatally shot by a white police officer June 12. The fast-food restaurant was burned during protests the following night and became a gathering place for demonstrations against police brutality.

Charmaine Turner noted the time as she spoke at a news conference Sunday, saying her daughter would have just finished eating dinner: “She would have been on TikTok dancing in her phone.”

The girl’s father, Secoriya Williamson, further reflected on the simple pleasures of an 8-year-old girl: “She just wanted to get home to see her cousins. That’s all she wanted to do.”

‘A CHANCE AT LIFE’

Studious and sweet, Natalia Wallace was preparing to start second grade in a few weeks at a Chicago elementary school.

The seven-year-old was killed Saturday night by a gunshot wound to the head. She was standing on the sidewalk in a West Side neighborhood where she’d visited her grandmother. Authorities said gunmen got out of a car and started firing rounds.

Her father, Nathan Wallace, said he’d hugged his daughter minutes before the shooting.

“I just wanted her to have a chance at life,” he said. “Whatever she wanted to do, I was going to be there no matter what. To see my daughter on the table with a gunshot wound to the forehead, that’ll change somebody’s life.”

A 33-year-old man was charged with murder Monday.

Teachers remembered Natalia as shy yet diligent as she completed remote lessons at the end of first grade.

“Sometimes, her quiet spirit gave her the strength to lead the reading lessons within her group, and she soared when it came to doing math,” said a statement from the school. “During e-learning, Natalia was always present and participating. At the end of each class session, she would type in the chat box, ‘I Love You.’”

‘HE WAS GOING TO BE SOMETHING’

Jace Young was a “bright star” with an unlimited future, his uncle said.

Six-year-old Jace was shot and killed while attending a birthday party Saturday in the Bayview neighborhood of San Francisco.

Nate Ford said his nephew was intelligent and empathetic beyond his years.

“We knew he was going to be something,” the boy’s uncle told the San Francisco Chronicle on Monday.

Jace was a whiz with computers, always chose milk over soda, and refused to eat meat, the unc said.

“‘Because it will kill animals’,” Ford recalled Jace saying.

No arrests have been made.

“Senseless violence like this that could so tragically claim the life of a small child is unacceptable in our City,” San Francisco police Chief William Scott said in a statement.

Johnson worked as a security guard at the Lavish Lounge, where gunfire erupted early Sunday during a performance by trap rapper Foogiano.

Bell’s family described the 23-year-old single mother of two small children as a caring person who looked after her younger family members.

“That’s going to be the hardest part – looking at my niece in a casket,” Ramon Arnold, Bell’s uncle, told WHNS-TV in Greenville. “Can’t see her face no more. A senseless crime.”

Ashley Arnold, Bell’s aunt, said her niece had just gotten a new job at a call center and planned to move her children into a new home.

“They love their mommy,” Ashley Arnold said, according to the Anderson Independent Mail newspaper. “And it’s up to us to keep her legacy alive for them.”

Friends affectionately referred to Johnson as “CJ” and “Big Sterling,” an affable man always happy to help out when he could.

“He was one who showed no partiality when it came to serving,” pastor Henry Johnson of Queen Street Baptist Church, where Sterling Johnson served on the usher board, told the Herald-Journal of Spartanburg. “Sterling was what I called a ‘servant’ who served in so many areas in our community wholeheartedly, making sure everyone felt safe.”

Davon McNeal wasn’t even supposed to be at the Washington, DC, cookout where he was shot and killed. The 11-year-old had only stopped by to pick up a phone charger and some earbuds, his family said.

Tony Lawson, the boy’s maternal grandfather, wept as he recalled the boy’s love for family and football.

John Ayala, Davon’s paternal grandfather, told the news station that it was shortly after the boy arrived that partygoers heard gunshots and everyone dropped to the ground.

“Everybody’s just saying they’re just tired – tired of the shootings in the community,” Ayala said. “We’re protesting for months, for weeks, saying, ‘Black Lives Matter, Black Lives Matter.’ Black lives matter it seems like, only when a police officer shoots a black person. What about all the black-on-black crime that’s happening in the community?”

Royta Giles Jr. would have started third grade this fall.

The 8-year-old boy was waiting in line Friday at an Alabama mall with his family to buy new outfits for the Fourth when gunshots rang out, AL.com reported. Police said a group of men got into an argument near the food court and fired at one another.

Family members, friends and his school described Royta as an energetic, smiling boy who dreamed of a future in the music industry and wanted to be a rapper.

Former assistant principal Mr. Van James said: “He was bright, articulate, and very convincing. We even tried to convince him to become a lawyer.”

The boy’s grandmother said the family was devastated.

“This is a baby we’ll never see again,” Kesha Layfield said. “I have to comfort his mother, and I don’t even know how to begin. I can only imagine what she’s feeling. Not only am I grieving for my daughter, but I’m grieving the loss of my grandson.”

Image: Chicago police officers investigate the scene of a deadly shooting in Chicago on Sunday, July 5, 2020, where a seven-year-old girl and a man were fatally shot during a Fourth of July party Saturday. At least a dozen people were killed in Chicago over the Fourth of July weekend, police said. Scores of people were shot and wounded. (Tyler LaRiviere/Chicago Sun-Times via AP)