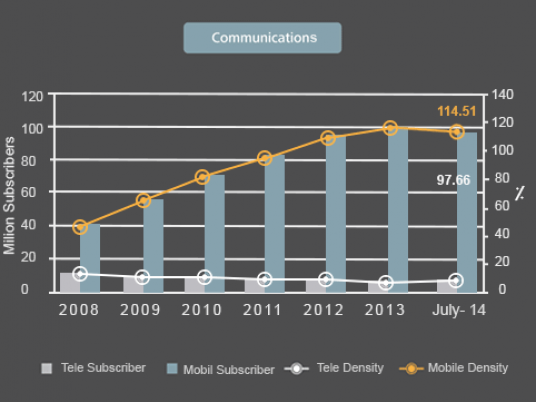 Business tycoon Naguib Sawiris, the former owner of the Egyptian mobile services company Mobinil, attacked the Egyptian government on Saturday evening for intending to issue a unified telecoms license.
The Egyptian government announced in December 2013 it would issue a unified licence allowing Telecom Egypt to operate fixed-line and mobile networks. The government-owned company used to monopolize the operation of fixed-line networks in Egypt only.
Telecom Egypt will offer a package of services for the current subscribers, company CEO Mohamed al-Nawawy said in an earlier statement in November. He expected Telecom Egypt to obtain 5 percent of the market of mobile carriers in Egypt.
"The market has been saturated," said Sawiris, stressing that the government needs to operate as a regulator to the economy only and to stop government investments. Sawiris suggested the government should put up projects through tenders for the private sector.
"The saturation of mobile networks has reached 120 percent on market, and Mobinil company lost LE500 million last year," Sawiris told presenter and journalist Magdy al-Gallad Saturday evening on CBC Channel.
"This move will achieve needed development and balance in Egypt's telecoms market," the National Telecommunications Regulatory Authority (NTRA) said in a statement in December 2013.
The number of mobile phone subscribers fell by millions for the first time in Egypt ever in August, according to NTRA.
The total number of mobile phone subscribers in Egypt was down by nearly 1.9 million to stop at 95.5 million, compared to 97.4 million in July 2014.
This brought the prevalance rate in the country to 114.5 percent, compared to nearly 120 percent a year earlier.
NTRA has announced recently the cancellation of more than 5.5 million mobile lines that belonged to anonymous subscribers due to rising security concerns following the ouster of President Mohamed Morsy in July 2013.
The government pressured the three mobile phone operators in Egypt Mobinil, Vodafone Egypt, and Etisalat Egypt to cancel the mobile lines belonging to anonymous users, leaving space on market for Telecom Egypt by decreasing the saturation rate.
Prevalence rate measures the percentage of service users compared to the population. The greater the rate is, the closer the market is to saturation.
Some people have more than one mobile phone, and the number also includes foreigners residing in Egypt.