The meeting on Tuesday appeared to signal a meeting of the minds on many issues between Trump and Prince Mohammed, in a marked difference from Riyadh's often fraught relationship with the Obama administration, especially in the wake of the 2015 Iran nuclear deal.

"This meeting is considered a historical turning point in relations between both countries and which had passed through a period of divergence of views on many issues," a senior adviser to Prince Mohammed said in a statement.

"But the meeting today restored issues to their right path and form a big change in relations between both countries in political, military, security and economic issues," the adviser said.

Saudi Arabia had viewed with unease the administration of US President Barack Obama, whom they felt considered Riyadh's alliance with Washington less important than negotiating the Iran nuclear deal.

Riyadh and other Gulf allies see in Trump a strong president who will shore up Washington’s role as their main strategic partner and help contain Riyadh's adversary Iran in a region central to US security and energy interests, regional analysts said.

The deputy crown prince viewed the nuclear deal as "very dangerous", the senior adviser said, adding that both leaders had identical views on "the danger of Iran's regional expansionist activities". The White House has said the deal was not in the best interest of the United States.

The meeting was the first since Trump's January 20 inauguration with the prince, who is leading the kingdom's efforts to revive state finances by diversifying the economy away from a reliance on falling crude oil revenues.

Under the plan, which seeks to promote the private sector and make state-owned companies more efficient, Riyadh plans to sell up to 5 percent of state oil giant Saudi Aramco in what is expected to be the world's biggest initial public offering.

The two leaders, who discussed opportunities for US companies to invest in Saudi Arabia, kicked off their talks in the Oval Office posing for a picture in front of journalists. 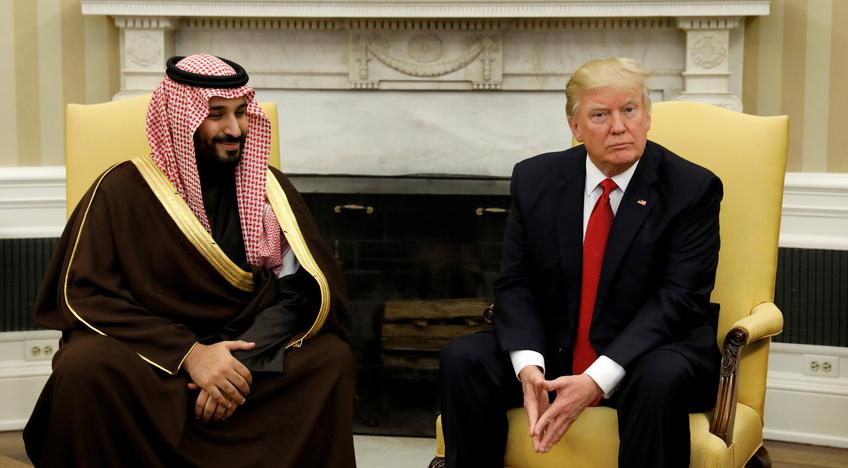 The meeting also appeared to illustrate support for some of the most contentious issues that Trump has faced since taking office on January 20.

On a travel ban against six Muslim-majority countries, the adviser said Prince Mohammed did not regard it as one that was aimed at "Muslim countries or Islam".

Earlier this month Trump signed a revised executive order on banning citizens from Yemen, Iran, Somalia, Syria, Sudan and Libya from traveling to the United States but removed Iraq from the list, after his controversial first attempt was blocked in the court

Trump's travel ban has come under criticism for targeting citizens of several mainly Muslim countries. The senior adviser said Prince Mohammed "expressed his satisfaction after the meeting on the positive position and clarifications he heard from President Trump on his views on Islam".

The senior adviser said the leaders discussed the "successful Saudi experience of setting up a border protection system" on the Saudi-Iraq border which has prevented smuggling.

Trump has vowed to start work quickly on the barrier along the nearly 2,000-mile US-Mexico border to prevent illegal immigrants and drugs from crossing to the north.

Obama late last year suspended the sale of US-made precision-guidance munitions to the Saudis, a reaction to thousands of civilian casualties from Saudi-led air strikes in Yemen.

US officials said Trump was considering ending that ban and approving the sale of guidance systems made by Raytheon Co. The State Department has approved the move, which awaits a final White House decision, the officials said.

A source close to the issue, who spoke on condition of anonymity, said a main topic of the meeting would be Saudi investment in the United States, which could help the US president fulfill his promises of job creation.

"It's the creation of jobs through investments – President Trump wants results and statistics matter for him," said Ingrid Naranjo, an expert in US-Saudi relations. "It makes a lot of sense for the diversification strategy of Saudi to invest abroad and especially in the US."

Gregory Gause, a Gulf expert at Texas A&M University, said that while Saudi Arabia might find the “atmospherics” of its relations with Trump better than those with Obama, it might find less change than it hopes on key issues.

For example, he said, Trump is unlikely to mount a major, costly effort to counter Iranian influence in Iraq, or to launch a full-scale campaign to oust Syrian President Bashar al Assad, as Riyadh might wish.

“I think they’re going to find rhetorically that the new administration says things and uses language they like more,” said Gause. “But I think on the ground, we’re not going to see an enormous difference.”

In a first, Egypt’s Orthodox Church holds mass for Christians in Saudi Arabia