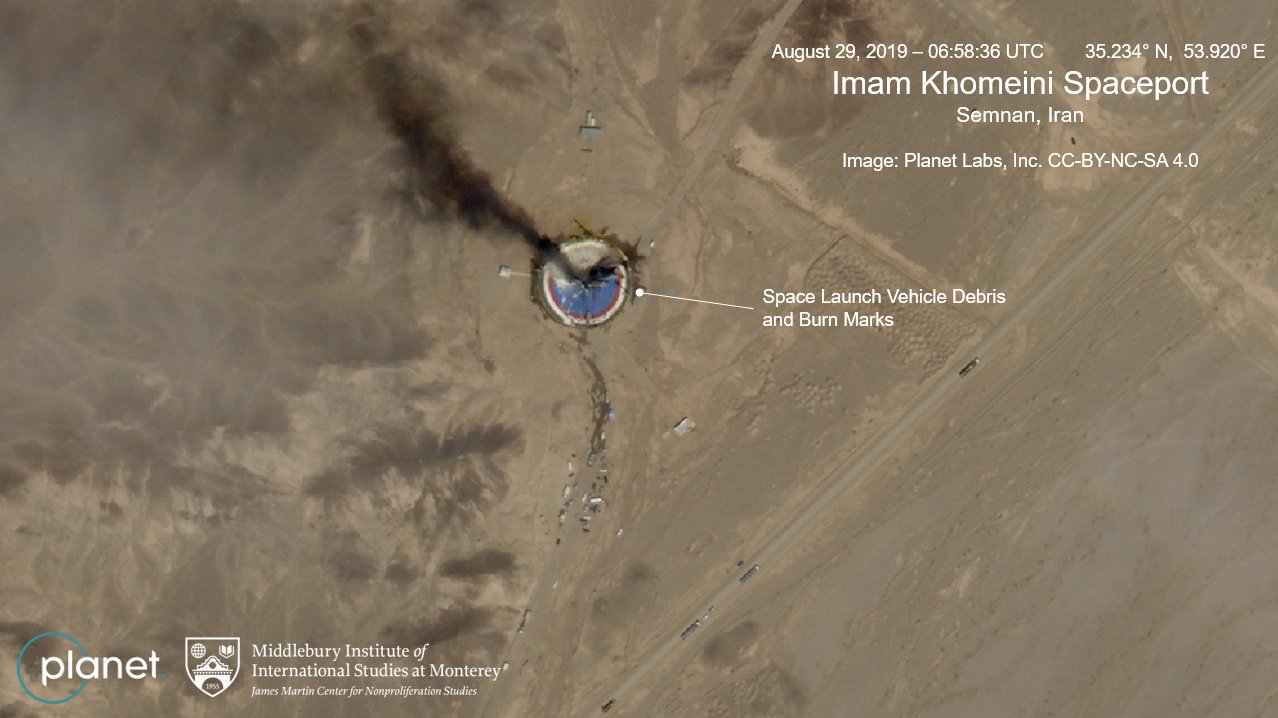 DUBAI, United Arab Emirates (AP) — A rocket at an Iranian space center that was to conduct a satellite launch criticized by the U.S. apparently exploded on its launch pad Thursday, satellite images show, suggesting the Islamic Republic suffered its third failed launch this year alone.

While Iranian state media did not acknowledge the incident at the Imam Khomeini Space Center in Iran’s Semnan province, a top official wrote on Twitter early Friday that a satellite Tehran planned to launch was safe in a lab.

Satellite images by Planet Labs Inc. and Maxar Technologies showed a black plume of smoke rising above a launch pad there, with what appeared to be the charred remains of a rocket and its launch stand. In previous days, satellite images had shown officials there repainted the launch pad blue.

On Thursday morning, half of that paint apparently had been burned away.

“Whatever happened there, it blew up and you’re looking at the smoldering remains of what used to be there,” said David Schmerler, a senior research associate at the Middlebury Institute of International Studies.

Schmerler told The Associated Press that the images of the space center suggested that the rocket could have exploded during ignition or possibly briefly lifted off before crashing back down on the pad. Water runoff from the pad, likely from trying to extinguish the blaze, could be seen along with a host of vehicles parked nearby.

NPR first reported on the satellite images of the apparent failed launch at the space center, some 240 kilometers (150 miles) southeast of Iran’s capital, Tehran.

Iranian satellite launches had been anticipated before the end of the year.

In July, Iran’s Information and Communications Technology Minister Mohammad Javad Azari Jahromi told the AP that Tehran planned three more launches this year, two for satellites that do remote-sensing work and another that handles communications.

The Nahid-1 is reportedly the telecommunication satellite. Nahid in Farsi means “Venus.” The satellite, which had Iran’s first foldable solar panels, was supposed to be in a low orbit around the Earth for some two-and-a-half months.

The semi-official Mehr news agency quoted Jahromi on Aug. 13 as saying that the Nahid-1 was ready to be delivered to Iran’s Defense Ministry, signaling a launch date for the satellite likely loomed. Iran’s National Week of Government, during which Tehran often inaugurates new projects, began Aug. 24.

On Twitter early Friday, Jahromi did not discuss the apparent rocket explosion, but asserted the Nahid-1 was safe.

“Apparently, some reports say the third attempt for putting a satellite into orbit have been unsuccessful,” he wrote. “Nahid-1 is fine, indeed. It is now in a laboratory and reporters can come and see it.”

Jahromi’s claim, if true, could suggest something went wrong in fueling the rocket prior to launch.

Earlier on Thursday, Iran’s Defense Minister Gen. Amir Hatami told the state-run IRNA news agency that the country’s satellite activities were “being done in a transparent way,” responding to AP and other foreign media reporting on activity at the space center.

“Whenever activity and research bear successful results, we will announce the good news,” Hatami said. Iran at times in the past hasn’t acknowledged failed launches.

The apparent failed rocket launch comes after two failed satellite launches of the Payam and Doosti in January and February. A separate fire at the Imam Khomeini Space Center in February also killed three researchers, authorities said at the time.

“I think it is certainly an image problem,” said Michael Connell, an Iran analyst at the Arlington, Virginia-based nonprofit research organization CNA. “I think it’s going to embarrass the Iranian space agency. On the other hand though, getting a satellite into space … takes time.”

Over the past decade, Iran has sent several short-lived satellites into orbit and in 2013 launched a monkey into space.

Iran, which long has said it does not seek nuclear weapons, maintains its satellite launches and rocket tests do not have a military component. Tehran also says it doesn’t violate the U.N. as it only “called upon” Tehran not to conduct such tests.

The tests have taken on new importance to the U.S. amid the maximalist approach to Iran taken by President Donald Trump’s administration. Tensions have been high between the countries since Trump unilaterally withdrew the U.S. from Iran’s nuclear deal over a year ago and imposed sanctions, including on Iran’s oil industry. Iran recently has begun to break the accord itself while trying to push Europe to help it sell oil abroad.

The State Department did not respond to a request for comment.

Photo: This satellite image from Planet Labs Inc., that has been annotated by experts at the James Martin Center for Nonproliferation Studies at Middlebury Institute of International Studies, shows a fire at a rocket launch pad at the Imam Khomeini Space Center in Iran’s Semnan province, Thursday Aug. 29, 2019. The satellite image released Thursday shows the smoldering remains of a rocket at a Iran space center that was to conduct a U.S.-criticized satellite launch. (Planet Labs Inc, Middlebury Institute of International Studies via AP)