In the graceful sixteenth-century Qubbat al-Ghouri (Al Ghoury Dome), located in the wholly authentic, utterly crowded Khan El Khalili district, musicians from 11 countries gathered to grace the ears and souls of the large audience with Sufi chants and music.

The Samaa International Festival for Sufi Music and Chanting brings together singers and musicians from all over the world. Each contributes their culture’s religious music to make dynamic, collaborative, and innovative compositions.

This annual spiritual enchantment is the brain child of  Entisar Abdel-Fattah, head of the Qubat al-Ghouri and founder, in 2007, of  Samaa troupe, which focuses on chants mostly from Sufi lyrics in praise of God and the Prophet Mohamed.

Samaa (“divine” in Arabic) describes the process of chanting and whirling to music in order to reach the height of spiritual ecstasy. Built on the inner, mystical dimension of Islam, Sufi music strives to derive spirituality from music.

The practice of Inshad (religious chants) is deeply rooted in Islamic culture. Some trace it back to Belal moazen al Rasoul (Belal Islam's first caller for prayer). In Egypt, it was first taught in kuttabs (traditional religious schools) and gained popularity through various Sufi sects. One of the most famous Munshidien is the prominent Sheikh Yassin al-Tohamy, whose divine voice fills the air during Sufi moulids and Islamic celebrations.

On the fourth night of the Samaa Festival, an eager audience applauded a group of musicians from India, Indonesia, Bosnia, Morocco, and Egypt.

The Indian group sat at the front of the stage, wearing colorful turbans. On either side of the stage sat the Moroccans, each dressed in a white galabya and a red tarbouche, and the Indonesians, who were wearing in brown tunics and black cotton hats. A step down from the crowded stage was the Egyptian group, each member wearing an identical traditional white abaya. Seated on the opposite side were the female singers from Bosnia, dressed in black tunics beaded in blue, pink, green, or yellow, and accompanied by a buoyant young man with a drum.

But on that ruthlessly humid night, there was also a sixth band at the Qubbat Al Ghouri; the audience. When the chairs were full, many were left standing, but they were far from passively looking on. Clapping away to the music’s beat, shouting out words of encouragement, and chatting excitedly, the crowd was loud and vibrant.

The group’s maestro proved to be another ball of energy throughout the show, despite his claims of an all-night rehearsal. “We have been practicing since 3AM, trying to figure out how we can combine the sounds of five different countries and unite them,” explained Abdel Fattah, founder of the festival.

Praising God and the Prophet Mohamed was the subject behind the Egyptian singers’ soothing vocals, which commenced the ceremony. But truly striking was the voice emanating from the Indian singers. Beating on a drum of his own, Abdel Fattah encouraged this captive group to increase their tempo, as the Moroccans beat on huge tambourines and the Bosnian women chanted softly into their microphones.

“Did you like that?” he asked, facing the crowd. “I am leading them according to the feel I am receiving from you.”

Lampposts highlight the audience’s smiling faces, and the tall walls echoed their frantic claps. The wall’s arches and windows were reminiscent of an old Cairo, a Cairo where the cameras did not flash so much and mobile phones with obnoxious ring tones did not exist.

To the frenzied drumming of the young Bosnian, the Moroccan’s beating of the large tambourine, the soulful swaying of the Indians, and blissful Egyptian vocals, the Prophet Mohamed was praised and celebrated.

Chants of “Allah, Allah, Allah” echoed through the room, as the maestro’s movements became more and more rapid. The chants quickly became contagious, with members of the audience singing along and clapping.

Next, the Indian vocalists imposed a soft, piercing sound against the cluck of an oriental wooden instrument. The Bosnian women began to chant in absolute unison as their drummer tapped away excitedly. The Indonesians were then invited by the maestro to start a chant of their own and, their voices as smooth as honey, their contribution elicited a tear or two from the crowd. When the Egyptians jumped in, the audience burst into applause. 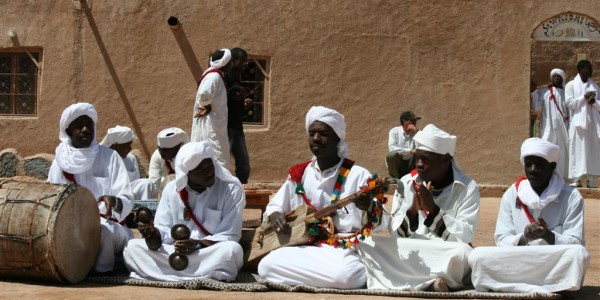