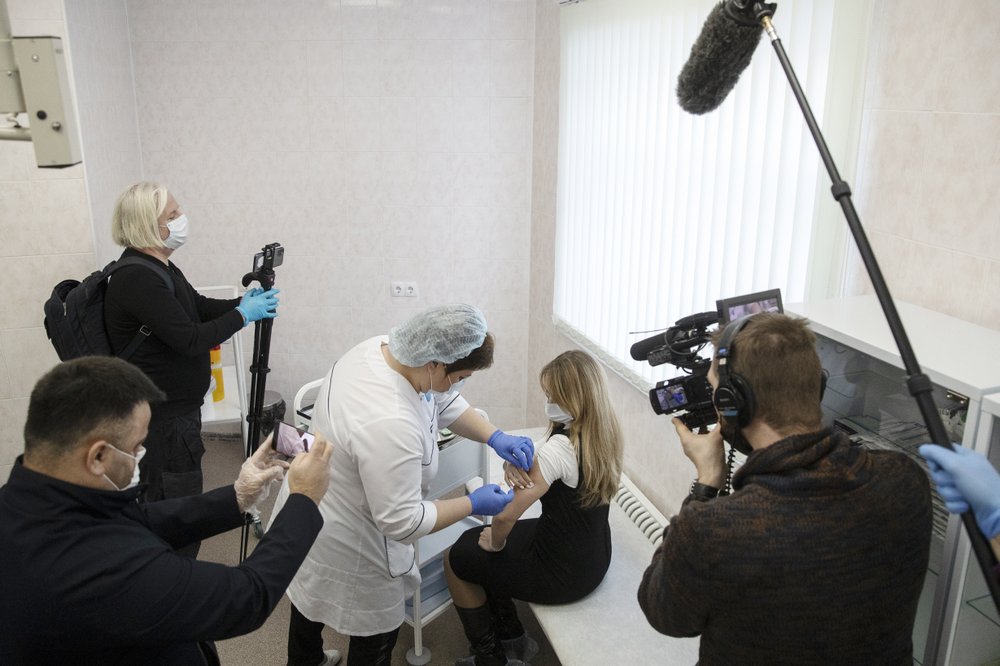 MOSCOW (AP) — While excitement and enthusiasm greeted the Western-developed coronavirus vaccine when it was rolled out, the Russian-made version has received a mixed response, with reports of empty Moscow clinics that offered the shot to health care workers and teachers — the first members of the public designated to receive it.

Kremlin officials and state-controlled media touted the Sputnik V vaccine as a major achievement after it was approved August 11. But among Russians, hope that the shot would reverse the course of the COVID-19 crisis has become mixed with wariness and skepticism, reflecting concerns about how it was rushed out while still in its late-stage testing to ensure its effectiveness and safety.

Russia faced international criticism for approving a vaccine that hasn’t completed advanced trials among tens of thousands of people, and experts both at home and abroad warned against its wider use until the studies are completed.

Despite those warnings, authorities started offering it to certain high-risk groups, such as front-line medical workers, within weeks of approval. Alexander Gintsburg, head of the Gamaleya Institute that developed the vaccine, said last week over 150,000 Russians have gotten it.

One recipient was Dr. Alexander Zatsepin, an ICU specialist in Voronezh, a city 500 kilometers (310 miles) south of Moscow, who received the vaccine in October.

“We’ve been working with COVID-19 patients since March, and every day when we come home, we worry about infecting our family members. So when some kind of opportunity to protect them and myself appeared, I thought it should be used,” he said.

But Zatsepin said he still takes precautions against infection because studies of the vaccine’s effectiveness aren’t over.

“There is no absolute confidence yet,” he said.

After Britain announced December 2 it had approved a vaccine developed by drugmakers Pfizer and BioNTech, President Vladimir Putin told authorities to start a large-scale inoculation campaign, a sign of Moscow’s eagerness to be at the front of the race against the pandemic.

Russia approved its vaccine after it was tested on only a few dozen people, touting it as “the first in the world” to receive a go-ahead. Developers named it “Sputnik V,” a reference to the Soviet Union’s 1957 launch of the world’s first satellite during the Cold War.

More than just national pride is at stake. Russia has recorded more than 2.7 million cases of COVID-19, and over 49,000 deaths, and it wants to avoid another damaging lockdown of its economy.

On Deember 2, Putin cited a target of over two million doses in the coming days. Despite such a limited supply for a nation of 146 million, Moscow immediately widened who was eligible for it. Shots are free to everyone in medical or educational facilities, both state and private; social and municipal workers; retail and service workers; and those in the arts.

The European Medicines Agency said it has not received a request from the vaccine makers to consider licensing it for use in the EU, but some data have been shared with the World Health Organization. The UN agency does not typically approve vaccines itself but waits for regulatory agencies to weigh in first. The Russian vaccine is reportedly under consideration for use in a global effort led by WHO to distribute COVID-19 vaccines to poorer countries.

Unlike in the UK, where the first shots are going to the elderly, Sputnik V is going to those aged 18 to 60 who don’t have chronic illnesses and aren’t pregnant or breastfeeding.

Putin himself hasn’t gotten a Russian-made shot yet. The 68-year-old Russian leader said the shots in Russia are currently being recommended to people of a certain age, adding that “vaccines have not yet reached people like me.” “But I will definitely do it, as soon as it becomes possible,” Putin told the annual news conference Thursday.

Its developers have said study data suggests the vaccine was 91% effective, a conclusion based on 78 infections among nearly 23,000 participants. That’s far fewer cases than Western drugmakers have accumulated during final testing before analyzing their candidates’ efficacy, and important demographic and other details from the study have not been released.

Some experts say such efficacy rates inspire optimism, but public trust may be an issue.

“I don’t so much worry about Sputnik V being unsafe or less effective than we need it to be,” said Judy Twigg, a political science professor at Virginia Commonwealth University specializing in global health. “I worry about whether or not people are going to be willing to take it in Russia.”

A poll conducted in October by the Levada Center, Russia’s top independent pollster, showed that 59% of Russians were unwilling to get the shots even if offered for free.

Denis Volkov, sociologist and deputy director of the Levada Center, says respondents cited unfinished clinical trials, saying the vaccine was “raw” and they were suspicious of the claims that Russia was the first country to have a vaccine while others were still working on theirs.

Some medical workers and teachers interviewed by The Associated Press expressed skepticism about the vaccine because it hasn’t been fully tested.

Dr. Yekaterina Kasyanova of Siberia’s Kemerovo region said she didn’t trust it enough to get the shot and has advised her mother, a teacher, not to get it either, adding: “The vaccine is several months old. … Long-term side effects are not known, its effectiveness hasn’t been proven.”

Dzhamilya Kryazheva, a teacher in Krasnogorsk near Moscow, echoed that sentiment.

“I don’t intend to experiment on my body. I have three children,” she said.

For other health care workers, the choice to be vaccinated was easy.

“People are dying here every day. Every day, we carry out corpses. What’s there to think about?” said Dr. Marina Pecherkina, an infectious disease specialist in the Far East city of Vladivostok. She got her shots in October because of her daily work with coronavirus patients.

Moscow Mayor Sergei Sobyanin said around 15,000 people received the shots since vaccinations started December 5. But some media reports about the first days of the Moscow campaign showed empty clinics and medical workers offering the shots to anyone who walked in. In some instances, this was because the vaccine must be stored at minus 18 degrees Celsius (minus 0.4 degrees Fahrenheit), and each vial contains five doses. Once defrosted, it must be administered within two hours or discarded.

The rollout outside Moscow and the surrounding region appeared to go much slower, with Health Minister Mikhail Murashko declaring that all regions started the vaccination December 15.

Media reports suggested there may be problems with scaling up the manufacture and distribution of Sputnik V. It uses two different adenovirus vectors for the two-shot regimen, which complicates production. In addition, the low-temperature storage and transport makes it harder to move across the vast country.

There also were confused signals about whether recipients should consume alcohol. Deputy Prime Minister Tatyana Golikova said those getting vaccinated should refrain from drinking three days before and after the shots.

Several medical workers in Siberia who received the vaccine later reported contracting the virus, but health officials said not enough time had passed for them to develop the antibodies.

Dr. Yevgenia Alexeyeva in the Siberian city of Tomsk tested positive for the virus 12 days after her second shot. Alexeyeva said she wasn’t surprised by the result and that it didn’t shake her confidence in the vaccine.

“The vaccine doesn’t guarantee that the person wouldn’t get infected. But it should protect us from developing a severe case,” Alexeyeva said.

IMAGE: A Russian medical worker administers a shot of Russia’s Sputnik V coronavirus vaccine in Moscow on Thursday, December 10, 2020. While excitement and enthusiasm greeted the Western-developed coronavirus vaccine when it was rolled out, the Russian-made serum has received a mixed response, with reports of empty Moscow clinics in the first days of the rollout. (AP Photo/Pavel Golovkin)

Turkey refutes report it ruled out Russia's COVID-19 vaccine, says could use if meets criteria