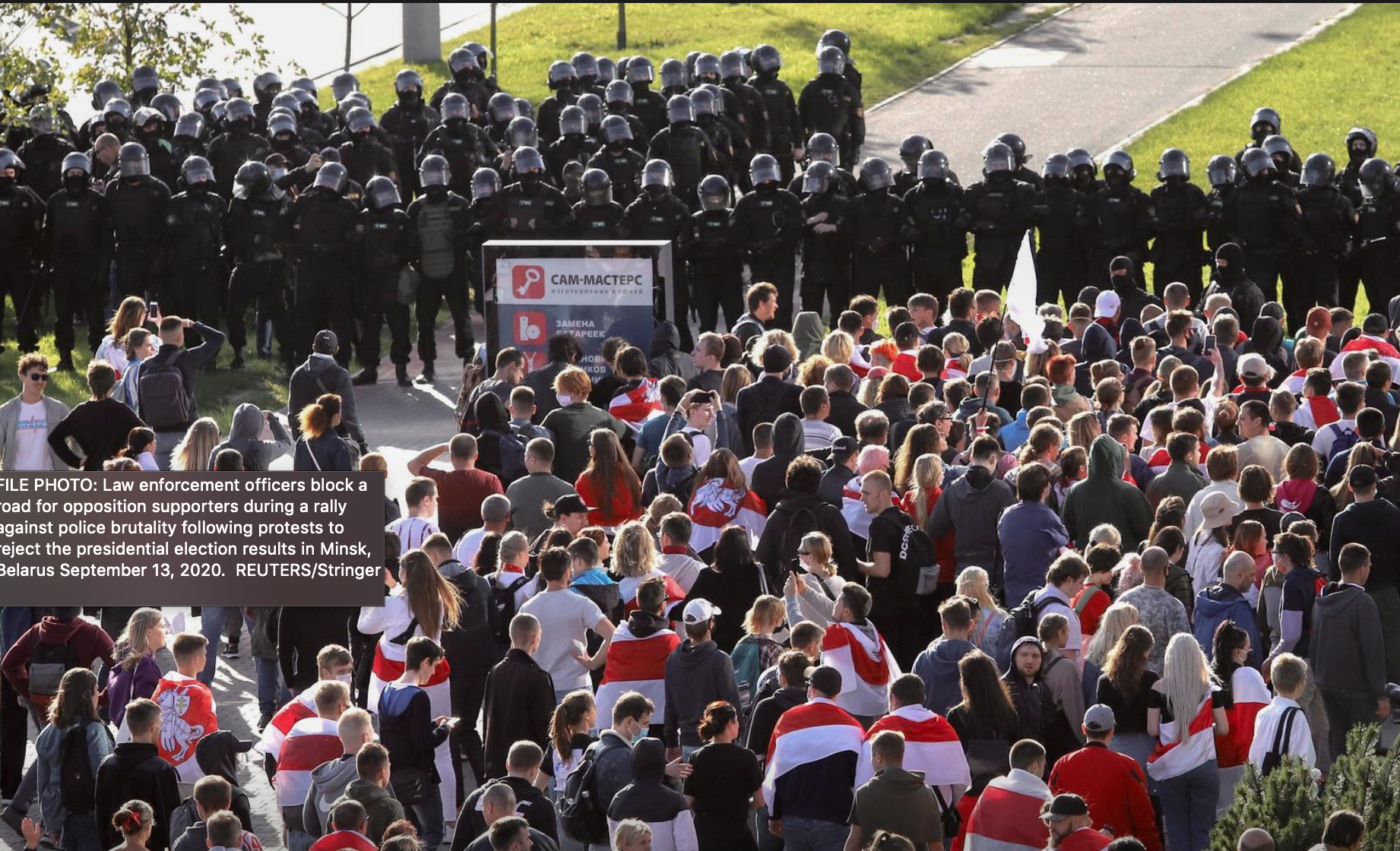 MOSCOW (Reuters) – Russia on Wednesday accused Washington of trying to foment a revolution in Belarus, where it sent its defence minister for talks on military ties, in a sign that Moscow’s support for embattled Belarusian leader Alexander Lukashenko was hardening.

Mass protests since an August 9 election marred by vote-rigging allegations have posed the biggest threat yet to Lukashenko, and the Kremlin’s backing has become vital for his chances of extending his 26-year rule.

The former Soviet state farm boss travelled to Russia on Monday for his first talks with President Vladimir Putin since the crisis began, coming away with a $1.5 billion loan to prop up his Soviet-style command economy.

On Wednesday, Sergei Naryshkin, the head of Russia’s SVR Foreign Intelligence Service, accused Washington of working behind the scenes to overthrow Lukashenko in a coup, some of Moscow’s strongest rhetoric over the crisis yet.

“Essentially we are talking about a poorly disguised attempt to organise another ‘colour revolution’ and an anti-constitutional coup, the goals and objectives of which have nothing to do with the interests of Belarusian citizens,” he was quoted by RIA news agency as saying.

He accused Washington of funding anti-government bloggers and training activists through NGOs and of backing others including opposition leader Sviatlana Tsikhanouskaya who fled the country for Lithuania amid a police crackdown.

“According to the SVR’s information, the United States is playing a key role in Belarus,” he said.

Russia has long blamed the West for revolutions such as Georgia’s 2003 Rose Revolution, and Ukraine’s 2003-04 Orange Revolution, in which Russia said the West backed the protesters.

Russian Defence Minister Sergei Shoigu flew into Minsk on Wednesday and held talks with Lukashenko, who said he had asked Putin to supply Belarus with several types of weapon.

He did not specify which weapons he had requested from Putin and the Kremlin later denied Putin and Lukashenko had discussed supplying Belarus with new arms, the TASS news agency reported.

Moscow is a close ally that sees Belarus as a buffer against NATO and a vital export corridor for its oil.

Finance Minister Anton Siluanov said Russia would provide the first $1 billion tranche of its loan to Belarus by the end of the year and deliver the remainder next year.

The loan, to be denominated in Russian roubles and US dollars, will help Belarus and its state companies honour their debt obligations and support financial stability, Siluanov said.

Moscow’s support for Belarus belies an awkward personal relationship between Putin and Lukashenko, who for years has played Russia off against the West in order to extract political gain from the Kremlin.

“The tactics of the organisers were based on the classic American textbook of colour revolutions,” he said.

In a shift, Belarus leader seeks to stem protests gradually

Cops quit in Belarus: 'That's not why we entered the force'