A boat carrying Rohingya Muslim refugees to Bangladesh capsized and at least 12 people, most of them children, drowned, police said on Monday, the latest victims of violence in Myanmar that has forced more than half a million people to flee.

The boat sank near Shah Porir Dwip, on the southern tip of Bangladesh, late on Sunday with up to 35 people on board, Bangladeshi police said.

Bangladeshi fishermen have been cramming their boats since late August with desperate Rohingya fleeing a Myanmar security crackdown that the United Nations has denounced as ethnic cleansing.

Bangladeshi police officer Mohammed Mainuddin told Reuters that 12 bodies – 10 children, one woman and a man – had been recovered.

A Reuters photographer earlier saw the bodies of four children, two women and a man washed up on a beach.

Authorities said 13 people had been rescued.

Some 519,000 Rohingya have fled Myanmar since Aug. 25, when attacks by Rohingya militants on police and military posts in Rakhine State sparked a ferocious response from Myanmar’s security forces.

Myanmar rejects accusations of ethnic cleansing and has labeled the militants from the Arakan Rohingya Salvation Army, who launched the initial attacks, as terrorists.

The insurgents declared a one-month ceasefire from Sept. 10, which is due to end at midnight on Monday.

The ability of the group, which only surfaced in October last year, to mount any sort of challenge to the Myanmar army is not known but it does not appear to have been able to put up resistance to the military offensive unleashed in August.

It would be difficult for the insurgents to operate in areas where the military has driven out Rohingya civilians, in the north of Rakhine Sate, near the border with Bangladesh.

The insurgents said in a statement on Saturday they were ready to respond to any peace move by the Myanmar government, but also noted that the ceasefire was about to end.

More than six weeks after the violence erupted, Rohingya continue to arrive in Bangladesh, which was already home to 400,000 members of the Myanmar Muslim minority before the latest crisis.

Mostly Buddhist Myanmar does not recognize the Rohingya as citizens, even though many have lived in Rakhine for generations.

Myanmar state media has in recent days reported that “large numbers” of Muslims were preparing to cross the border. It cited their reasons as “livelihood difficulties”, health problems, a “belief” of insecurity and fear of becoming a minority.

But even as refugees arrive, Bangladesh is insisting that they will all have to go home. Myanmar has responded by saying it will take back those who can be verified as genuine refugees.

Most Rohingya are stateless and many fear they will not be able to prove their right to return.

A Myanmar official held talks on a repatriation plan in Bangladesh last month and Bangladesh Home Minister Asaduzzaman Khan is due to visit Myanmar for more this month.

Khan told reporters on Sunday he believed an agreement would be worked out.

Myanmar leader and Nobel peace laureate Aung San Suu Kyi has faced scathing international criticism and dismay for not doing more to stop the violence, although she has no power over the security forces under a military-drafted constitution.

The United States and Britain have warned Myanmar the crisis is putting at risk the progress it has made since the military began to loosen its grip on power in 2011.

The European Union and the United States are considering targeted sanctions against Myanmar military leaders over the violence, officials familiar with the discussions say.

Sunday’s apparent accident was the latest involving refugees. On Sept. 28, a boat carrying about 80 refugees overturned with only 17 survivors.

In early September, 46 bodies were recovered after a boat sank in the narrow stretch of water that separates Myanmar and Bangladesh. Among the dead were 19 children, 18 women and nine men. 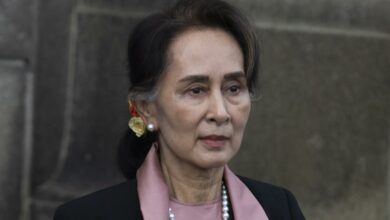 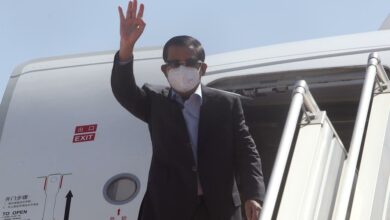 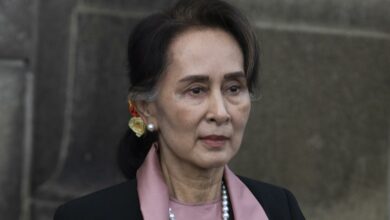 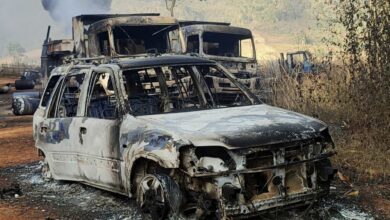 Save the Children says staff missing after Myanmar massacre