Egyptian students woke to Mubarak-less history books in the wake of the new academic year. The new look of the textbooks that were previously laden with visuals of the bygone president reflects a new direction from the government: events-oriented, rather than character-based, history learning.

This may be good news for those who don’t want history to be reduced to a series of decision makers. But it’s not enough good news, for many describe the curricula changes as cosmetic and say a more radical change to the way history is taught in schools is needed. 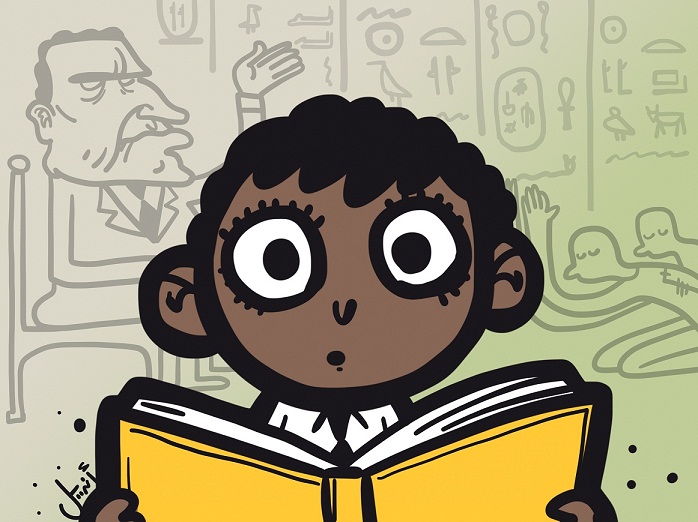 Outrage broke out when the new books for the sixth primary grade were released in the post-uprising fall of 2011 with the same section discussing Hosni Mubarak’s achievements, now ending with the line:

“But these attempts were not enough to live up to the ambitions of the nation and the needs of the people, which led to a revolution of the people against the ruling regime in January 2011.”

In response, the Ministry of Education under Essam Sharaf’s cabinet formed a committee to update the history curricula to correspond to the political change in the country.

Assem al-Dessouky, a professor of modern history and a member of the committee, says that its task was strictly limited to lessons about Mubarak’s era, and the rest of the curricula remained unchanged.

Dessouky says the committee recommended that, instead of teaching Mubarak’s era in terms of achievements, it was taught as an introduction to the reasons for the revolution.

After the committee made its recommendations, the ministry issued a booklet to replace the parts about the Mubarak era in the curriculum. The booklet shyly mentions some of Mubarak’s faults while still mentioning some of his “achievements.” The curriculum's logic of spoon-feeding history as fact, however, remained intact.

For some, the way forward is to deny Mubarak altogether.

Earlier this month, Parliament's Education Committee demanded the cancellation of Mubarak's history altogether from school curricula, an apology from the ministry for teaching it in a positive light, and a punishment of those responsible for it.

How curricula are traditionally cooked

At the Curricula and Educational Material Development Center, an affiliate to the Ministry of Education, experts speaking on condition of anonymity — because they are not allowed to speak to the media — introduced Egypt Independent to the process of developing school curricula.

For every school year, the ministry develops a book of general guidelines containing the lessons to be learnt throughout the year. Another guidebook is developed for every subject.

Guidebooks for the history curricula, as big as the books to be written based on it, contain specific instructions regarding the content to be included, the impressions to be given to students and the lessons to be learnt. Instructions include what opinions should be constructed by students after consuming the curriculum, and eventually, in an almost Orwellian fashion, how they should feel.

The ministry then holds a competition for wording the content it has already stipulated in detail, and the book chosen by a panel of experts and academics is the one that ends up in schools.

Academics have complained that this process leads to content being mainly decided on by ministry employees rather than historians and academics.

The center's experts that talked to Egypt Independent acknowledged that a national bias and an adaptation to the political scene is involved in the development of school curricula, and that it’s all channeled through self-censorship. But they think it’s necessary self-censorship: a national duty.

“Even if there are some flaws, I can’t tell students in primary and preparatory stages bad things about their country, they will develop a wrong idea. What we do in this stage is that we list all the positives and focus on them and then they can study the rest in postgraduate studies,” says one of the anonymous experts.

“There is no direct intervention by the state but unfortunately we have a flaw, in that most of those writing the books adhere to the political atmosphere — they think about what to write especially when they’re addressing an era that’s still ongoing,” says Dessouky, who took part in writing a history book for high schoolers in 1990. “People think freely but talk within boundaries.”

To avoid this problem, Dessouky says that he and his colleagues have recommended the ministry only teach an era after it ends so that it can be properly analyzed and criticized.

The books praise the nation through its rulers

One main characteristic in the history taught to students aged between 10 to 18 is the glorification of Egypt and its rulers.

Egypt’s history is taught as a streak of successes interrupted only by malicious foreigners who try to take advantage of Egypt but are eventually driven out by its people. Wars, diplomatic efforts and popular movements are uncritically taught from a one-dimensional Egyptian perspective.

The 1973 war with Israel is a case in point. According to the ministry’s books, the war was a sweeping victory for Egypt and the Camp David Accords that followed in 1979 were indisputably the best course of action. Despite its recent deterioration, Egypt’s role in the region over the years is portrayed as leading and even heroic.

The history of the three following presidents is taught as a list of achievements: Gamal Abdel Nasser is praised for ridding Egypt of the British occupation through the 1952 coup, Anwar Sadat is portrayed as the man who has brought Egypt peace through the Camp David Accords, and Mubarak, before the recent changes, as a leading hero in the air force during the 1973 war and an economic and social reformer.

Little is mentioned of these leaders’ anti-democratic practices or criticism of the achievements listed. Characters that fell from the graces of the regime — such as Mohamed Naguib, Egypt’s first president, and Saad Eddin al-Shazly, a leading military figure during the 1973 war who was dismissed shortly after it due to differences with Sadat — are overlooked.

With the toppling of Mubarak through a largely leaderless revolution, the people temporarily became the triumphant the in history books.

“History is always written by the triumphant, but this time it’s the people that triumphed and that’s why we focused on the events and not the people,” says a curricula expert at the center.

But that was a brief moment.

Glorification of the ruler is nevertheless apparent in the depiction of the military, the current power holder, in the new books. Despite growing criticism that the ruling military council has come under in the last year, the parts added about the revolution focus on the military’s role in protecting it, and on the unbreakable bond between the military and the people.

Emad Hilal, a modern history professor in Suez Canal University, has written many articles in recent years exposing inaccurate information in school history books. He sees these inaccuracies as a result of what he calls “the stone age phenomenon.”

“Every new ruler says that the era preceding him was the stone-age and portrays himself as the prophet,” says Hilal.

As a result of this trend, he says, every era is credited for more than its fair share of accomplishments, an index of how the different ruling regimes aggressively intervene in the development of the curricula with its political agenda rather than treating history as a social science.

The teaching of the accomplishments of the French and English invasions in Egyptian schools is a result of the propaganda put out by the West, according to Hilal. The same goes for the 1952 coup which, Hilal says, even though it wasn’t able to erase the Western view of the previous era, also gave itself credit for more than it deserves.

“History is an industry and it’s about politics and we are the last to make use of it, we are consumers rather than presenters of history, we believe whatever we’re told without thinking about it,” says Hilal.

On the receiving end

According to history teacher Hoda Ismail, exaggerating Egypt’s achievements is not as effective in growing a sense of national pride as the ministry employees said.  Ismail, who teaches 12 and 13 year olds in a private school, says that the students have come to consider the history class “the class of lies.”

Ismail says that the students started to take their country’s history lightly after seeing the information in the books in sharp contrast with what they see in real life. She also says that she doesn’t know how to answer the kids when they ask about the contradictions between the Egypt portrayed in the books and the Egypt they see.

“The books have no credibility as far as the kids are concerned, but they were happy with the new parts about the 25 January revolution because they said this is something that we have witnessed, it’s something we can trust,” she says, adding that it was a normal reaction after an increasing dissatisfaction from the students with any state praise in the books.

Khaled Fahmy, chair of the History Department at the American University in Cairo asks for a radical change in the philosophy of teaching history in schools that introduces the students to a critical way of understanding the multiple narratives of history and lets them develop analytical skills to reach their own conclusions and understanding of history.

“Part of being politically informed is to know the questions not the answers,” he says

Fahmy gives an example of what he considers an exemplary history textbook put together by prominent Egyptian Writer Taha Hussein in the 1950s.

The book consisted of original texts written by leaders throughout the Egyptian history and Hussein addressed the students in the introduction telling them that the aim of the book is to help them appreciate the multiple discourses of history and to realize that what they read has been constructed and understand the circumstances that led to its writing in that particular way.

Fahmy says that the reason history instruction deteriorated from this analytical philosophy to forcing students to memorize the state narrative of history is due to the military mentality that followed the 1952 military coup.

“The military mentality doesn’t accept vagueness and complexity, it tries to regiment thoughts and humans,” he says.

“Right now, if we implement what we used to teach 60 years ago that would be truly revolutionary,” he adds.