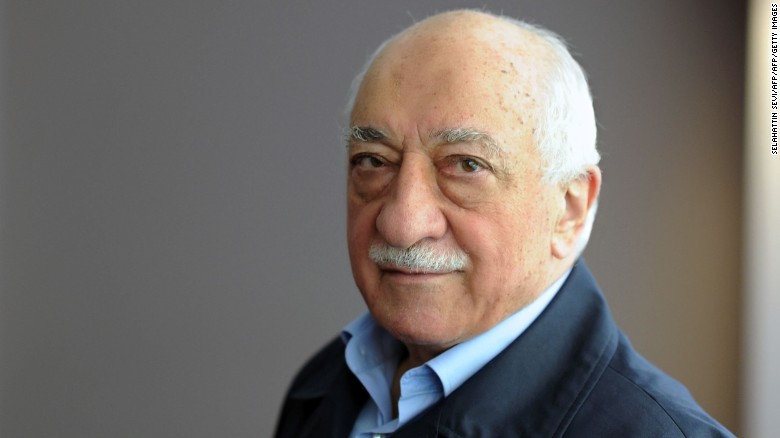 The host of the TeN satellite channel, Nashat al-Dehi, interviewed Turkish opposition leader Muhammed Fethullah Gülen, leader of the Gulen movement, who currently lives in a guarded house in the US.

Gülen said that Turkish President Recep Tayyip Erdogan has committed many abuses against his people since he came to power, in addition to his structuring of the Turkish Armed Forces Foundation in order to implement his own agenda.

Erdogan toppled many army officers opposing his goals, he said, in order to exploit his influence in the region.

Gülen praised Egypt as a role model nation, as well as holding an important place in the history of the Islamic world.

A transcript of their interview follows:

Dehi: Why are relations between Egypt and Turkey strained, and is it permissible to do all this in the name of religion?

Gülen: Actually, I didn’t hear that any Egyptian official on any level had offended the Turkish people.

But when the 2013 events happened the head of the Turkish government, Erdogan back then started it by saying that “there is a Moses to each Pharaoh”, calling the Egyptian president a pharaoh before getting to know him properly and understand his character, which created tension between the two parties.

Change that is based on principles and certain values, which protects the country’s security and stability, defers from the change that creates uncertainty and chaos in the country.

Dehi: Address the Egyptian people with a few words?

Gülen: The Egyptian people really like the Turkish people and both sympathize with each other, but the Turkish politicians normally tend to criticize the Egyptian ones because of political reasons, and this criticism is going on until now.

These Turkish officials expressed on many occasions their intention to renew relations between Egypt and their country and to restore normal relations. But I am not sure if that could happen after this long break up in relations. Even though I wish that the two countries could restore relations. But if such Turkish politicians are in power this hope is so thin or even impossible to be materialized. As they flip all the time and are inconsistent, changing their position overnight.

As God said in the Holy Quran; “Wavering between them, [belonging] neither to the believers nor to the disbelievers”

Dehi: Why has the current Turkish regime imprisoned so many journalists and dissidents overexpressing their opinion?

Gülen: The current leaders of our country aren’t true sons of Anatolia. It’s even said that they came from the north. They lost sight of the original values of Anatolia’s people. But they pretend to respect the values of these people and its religious, moral, traditional and cultural principles.

They can’t understand and adopt these values. And they use Islamic slogans and powerful Islamic speeches to guarantee that they remain in power.

Yes, we supported these people in the past, as Erdogan used my advice when he launched his political project.

I heard he prays, and he is an ‘Imam and Speakers’ high-school graduate, and he doesn’t have a college degree.

So, I gave him useful advice and positive opinions. But since he held office, he has used his power for his own interests, and has controlled the education institutions.

So he closed institutions, schools and the private colleges which didn’t have a place for alcohol, smoking, drugs and all these sort of things. He closed these institutions merely because it didn’t serve his own domestic and foreign agenda. He admitted it, he said that he changed three ministers to close these institutions.

He revealed his true face during the corruption and bribery investigations of December 25-27, 2013.

Bribery and stealing were uncovered in addition to their corruption despite pretending to be Islamist, despite their control of the security agency and judiciary system that revealed their corruption.

Erdogan accused the police, prosecutors and judges who worked in the case of being members of “the service” movement.

I don’t know anyone of them, maybe some of them are sympathizers with “the service”, and believe in the legitimacy of its activities, and the benefits it achieved for society.

But still, I don’t know them. The philosophy of “the service” is based on fighting three things, ignorance, poverty and conflict.

Coexistence, cooperation and agreement are among the means of seeking heavenly support, and its a must to move on in this path. On that point, “the service’s” sympathizers found these ideas reasonable and useful for humanity. That’s why they embraced it. That’s why these ideas became so popular and its sympathizers were accepted in many countries.

But believe me, I don’t know most of them. Yes, Erdogan wanted to control the armed forces and change to serve his own interests. Then he launched a campaign against “the service” and was determined to get rid of its sympathizers.

Dehi: Is there real democracy in Turkey?

Gülen: Democracy is the best system of diverse and heterogeneous societies.

There are all kinds of Muslims and Christians in Turkey and Egypt, and there are atheists too. So I believe we should support administrations that take into consideration the common ground of society and doesn’t harm anyone.

And that is happening right now in Turkey. And its not clear if they are intentionally doing that to serve their own interests or by mistake.

After all, they know nothing about politics. Granted that they did something that served Muslims, but they covered it with Islamic slogans and used it as cheap goods to guarantee remaining in power, and also impart legitimacy to their corruption and their luxurious lives.

Dehi: Are the views of all segments of Turkish society considered?

Gülen: The situation now shows that they are pragmatists.

Egyptian society is diverse like the Turkish one, so consideration for the beliefs and feelings of all groups is critical for both countries.

Democracy has different forms and applications all over the world.

So we can develop a democratic system that is fit for situations and values that also allow as to benefit from our diversity.

If the regime in Turkey wants to form a new constitution, it should be one that is suitable for the Muslim majority and respects other beliefs at the same time.

If they ask me, I will advise them to adopt the American constitution that respects all rights and beliefs, and serves the Muslim rights.

And they can benefit from it as they did with the French one in the past.

Dehi: What do you think of the current Turkish Constitution?

Gülen: The current Turkish constitution is unfit to rule a society like Turkish society, which has various races and groups.

Our country has different groups like the Turkish, the Kurds, the Circassians and the Alawy, in addition to various sects of Muslims, atheists, and others.

You can’t force this diverse society to follow one opinion, you must consider the feelings of all of them.

Because life is giving and taking, and you must treat people in the way you want to be treated.

Dehi: When can you visit Egypt?

Gülen: I take medication every 30 minutes, and recently I endured a surgery that caused serious complications.

That’s why I don’t think my health conditions will allow me to travel.

Dehi: If you were asked to send a message to Erdogan, what would you send him?

Gülen: Erdogan listens to no one, especially us.

As he has preconceptions against us, he accuses us of terrorism and accuses me personally of leading it, and they have passed life sentences on me many times.

That’s why I have nothing to say to him. But the democratic countries, western states and Islamic countries can take a unified position against him to push him to stop his tyranny.

And I believe that is the only way to stop the chaos and unrest that Turkey lives in now.

That what a dear friend told me, who is a sympathizer for “the service” and was a foreign minister for Erdogan.

Dehi: Is the situation in Turkey close to going the right way?

Gülen: They are on the right track, but I follow up from abroad and I am not in a position that allows me to talk about what is happening like someone living in it.

Dehi: How do we save the world from terrorism? And purify religion from impurities?

Gülen: I believe that the prevailing chaos in the world will continue, unless we form an ideal system that serves the welfare of all humanity. But we must be committed to follow this path. I believe that the dear Egyptian people and those who didn’t yet lose their humanity in Turkey can do it. If they achieve balance and moderation on intellectual and emotional levels, and succeed in forming an ideal system that is a role model for the rest of the world.

Dehi: What do you think of Iran’s behavior towards Islamic countries?

Gülen: Iran now adopts a western enmity for the Sunni world, and leads a harmful operation against Muslim countries.

Anyway, I hope that they act in a balanced way and refrain from offending our values and figures like Abu Bakr, Omar, and Ottoman, may God bless them and bless our prophet.

I still hope that they stop offending our mother Aisha, may God bless her. Yes, these are very important things.

To unify Muslims, to achieve understanding, harmony and solidarity between them. The west, especially the Anglo-Saxon sphere, had made the Islamic world their enemy in the past. That was before the Muslim leader who conquered Istanbul made his great saying “Now the Christian wars have ended”.

But the current shameful situation of Muslims after the many defeats they endured in the past isn’t likely to be changed in short period. But it will take three generations to reform it. And I believe we do our best to reform our situation in our time.

Turkish school takes US approach to get foothold in Egypt

Turkey seeks to detain 102 over suspected links to cleric