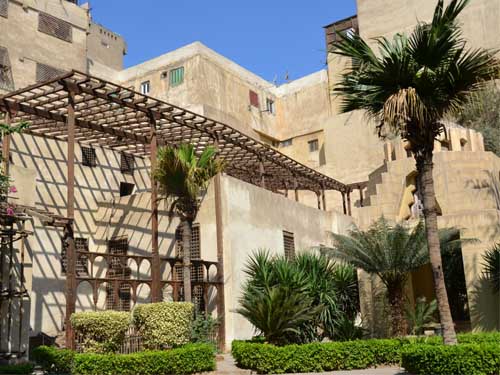 For 12 years, monuments conservator Hayam Ezzat has made her maintenance rounds in January and June, treading through an old creaking historical house at the heart of Old Cairo. In June 2011, however, she realized that her rounds would ground to a halt.

Ezzat was born and grew up in Darb al-Asfar neighborhood, known for housing the historical landmark of Beit al-Suheimi, an Ottoman home strewn with mashrabeyas on each of its three floors and inlaid with mosaic patterns against ornamented high ceilings. Having undergone an incredible restoration odyssey in the 1990s, the neighborhood today is an epitome of how the restoration project breathed life into a community that once seemed removed from its own heritage.

Darb al-Asfar residents take pride in living in a community that belongs to a unique historical area and is a model for other restoration projects across Cairo.

But how did it all begin?

When the project came to the neighborhood in 1994, it was cause of much worry; eviction, for one, topped people’s concerns. However, as it started laying down the area’s development plans, it became apparent that the project intended to reel in the local community.

Project manager Asaad Nadim was the man behind this change.

Ezzat, who later became his personal assistant, says the Darb al-Asfar community grew to love Nadim — he had always kept the community’s interests in mind since he first decided to restore Beit al-Suheimi.

“He loved this house so much that he would visit it regularly. When he visited after the 1992 earthquake, he saw that it had partially caved in and was in a horrible condition,” says Ezzat.

So Nadim sought a grant from the Arab Fund for Economic and Social Development to restore the dilapidated historical houses in the area. He became the fund’s representative until the restoration work was completed in 2000, and from the fund’s surplus, Nadim covered maintenance expenses until the money ran out shortly before he died in April 2011.

Still, over the years, Nadim had managed to leave a mark on the community through his relentless investment in a particular restoration approach.

“[Nadim’s] vision can be summed up as follows: You are not just dealing with a monument, but with the people who live around it. He knew that people could directly have a hand in preserving the place,” Ezzat explains.

Nadim thus sought the expertise of his wife, anthropologist Nawal El Messiri. Early on in the project, Messiri studied the socioeconomic conditions of the Darb al-Asfar community. She recalls moving from house to house to meet with families.

“I conducted a survey on both the people and the buildings in which they lived. There were almost 130 families in about 40 houses,” Messiri says.

A 22-year-old Ezzat would then accompany Messiri on her home visits. She remembers watching Messiri having “friendly and personal” talks with the families.

Messiri found that studying these families was essential to understanding how the area would develop throughout the project’s timeline.

But there were also some bumps along the way. Messiri and Nadim had to negotiate with 30 families that had taken Beit al-Kharazaty — another historical house in the neighborhood that was on the verge of collapsing — as their home. The families were eventually compensated with new apartments in Madinat al-Salam neighborhood in eastern Cairo.

The couple also invited the neighborhood residents to attend meetings in Beit al-Suheimi, where they would explain to them the project’s different phases giving the alley a facelift. In time, sewage, water and electricity reached people’s homes, and the local community felt more and more comfortable with the project.

“Every home painted its facade with the brownstone color typical of monuments,” says Ezzat. “A system of lanterns was installed and a pedestrian walk was paved. The alley was completely transformed.”

The restoration of the three historical houses in Darb al-Asfar proceeded with full force, with engineers, craftsmen, architects and restoration workers swarming in the area to join the project until the work was completed in April 2000. An official celebration was held on 16 April and a more communal one took place the next day.

Until recently, both the residents and visitors continued to enjoy the restored historical houses, as well as, the neighborhood. But the project’s restoration staff and the Darb al-Asfar community are currently coming up against new obstacles.

Messiri says the community has come under threat since the 25 January revolution began due to the persistent state of lawlessness.

“For instance, someone opened a shop without anyone’s consent,” says Messiri. “At night, the neighborhood’s entrance is transformed into a raucous cafe, and thugs visit the area sometimes.”

Ezzat adds that maintenance work has also stopped since the funds ran out last year, one week before Nadim’s death. At that point, Messiri says, the government was officially handed the project, and should have continued maintenance.

Nadim’s other efforts have not died out, however. A different grant he had sought for a failed doors replica and restoration project was transferred to the Egyptian Archives of Folk Life and Folk Traditions project. It is currently up and running, headquartered in Beit al-Kharazaty, the house adjacent to Beit al-Suheimi. Messiri and Ezzat continue to work there.

While the end of maintenance is due to Ezzat’s personal ailments, she fears more for her home and community, and wishes to see Darb al-Asfar restored back to the way it was in the old days.