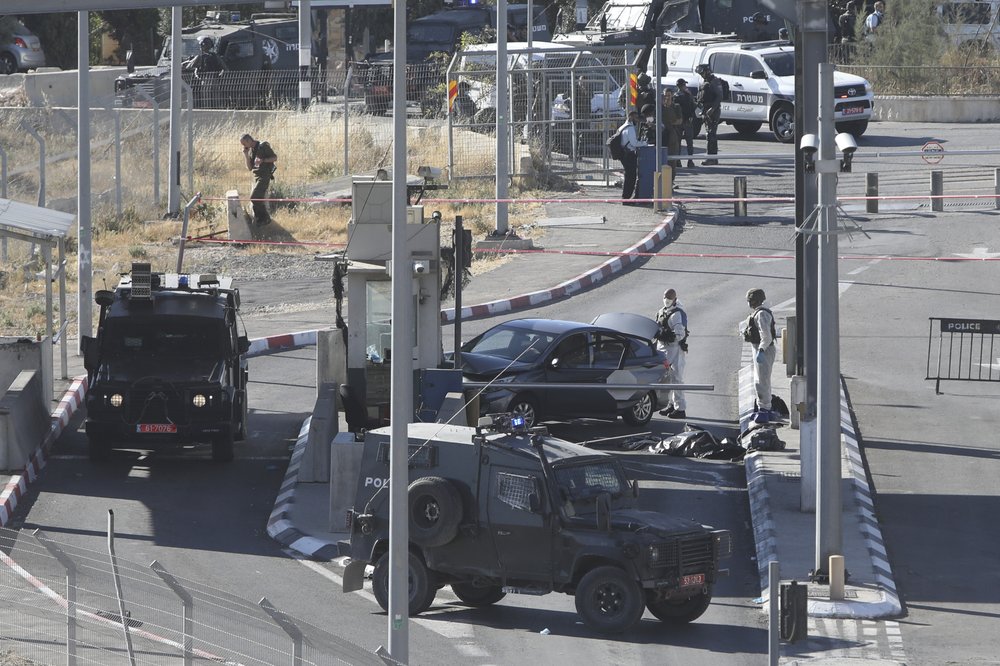 TEL AVIV, Israel (AP) — An international research group examining the fatal shooting of a Palestinian motorist challenged Israeli self-defense claims, saying the man had emerged from his car after it crashed into a checkpoint, did not approach troops and was instantly shot six times. It says the last three rounds were fired while he lay curled up on the ground.

Israel has said 27-year-old Ahmad Erekat intentionally rammed his car into a guard booth at a military checkpoint in the occupied West Bank, and that troops killed him in self defense.

The London-based group Forensic Architecture, working with the Palestinian human rights group Al Haq, reviewed the June 23 shooting at the request of the Erekat family and released its findings this week. “Our analysis raises major questions about Ahmad’s killing that raise doubts in the Israeli army’s claims and calls for further investigation,” the group said in a statement.

In recent years, Palestinian assailants have carried out a series of shootings, stabbings and car ramming attacks against Israeli soldiers and civilians. Human rights groups have accused Israeli troops of repeatedly using excessive force and in some cases opening fire at cars that merely lost control.

An outside investigation of such a shooting is rare. Ahmad Erekat was a nephew of the late Palestinian negotiator Saeb Erekat.

Forensic Architecture, which investigates human rights violations, used security camera footage, 3D analysis and other techniques to review the June 23 events from the time of Erekat’s shooting to when his body was removed from the scene.

The video shows Erekat’s car slowly approaching the checkpoint, veering left and then abruptly pivoting to the right, colliding with the booth.

After the car hits the booth, a female officer can be seen flying through the air and quickly stands up. Erekat steps out of the car with at least one hand raised, taking no steps toward the checkpoint and Israeli officials. He is immediately shot and falls to the ground.

Shortly after, his arm can be seen moving, suggesting he might have still been alive. Later, an officer can be seen passing closely by the still figure without pausing to check on it.

The group said its evidence shows that the Israeli forces did not give Erekat medical treatment and even turned away a Palestinian ambulance. Erekat likely died during that time, the analysis says.

Investigators later can be seen flipping Erekat’s body over from the exact position in which he fell. At one point, the analysis claims his body was stripped before it was removed from the scene, but that footage is blurred, the group said, out of respect for Erekat’s family.

The Israeli police did not return a call seeking comment Friday.

In a response carried by the Israeli daily Haaretz, Israeli authorities insisted troops acted in self-defense. Police described the incident as “a documented terrorist attack that almost took the lives of the fighters at the checkpoint.”

Forensic Architecture said in its report that Erekat’s car hit the guard booth at a steady slow speed, rather than accelerate. Israeli police disputed that finding, saying the car suddenly accelerated. It said a female police officer was injured in the incident.

Police said Erekat’s body was kept at the scene for an examination by a bomb disposal expert, and that “when he was done, the medical forces were able to work.”

In its initial response in June, police had claimed that Erekat moved toward the officers after getting out of the car – a claim not backed up by the video.

Erekat’s family cast doubt on the police account, saying he had rented the car as he prepared for his sister’s wedding party later that day, and that his own wedding was scheduled the following week.

“There is no way on earth he would attempt to carry out an attack,” his cousin, Hiba Erekat, said at the time.

Image: FILE – In this June 23, 2020, file photo, Israeli policemen stand around the body of a Palestinian at a checkpoint near Jerusalem. Israeli police previously said that Ahmed Erekat, a 27-year-old print shop owner, rammed his car into a checkpoint in a terrorist attack and later died of wounds following gunfire from police. Earlier this week, Forensic Architecture, a London-based group that investigates state violence, and Palestinian human rights group Al Haq said its analysis raises major questions in the Israeli army’s claim about Ahmad’s killing and calls for further investigation. (AP Photo/Mahmoud Illean, File)