SEOUL (Reuters) – The Red Cross has trained 43,000 North Korean volunteers to help communities, including the locked-down city of Kaesong, fight the novel coronavirus and provide flood assistance, an official with the relief organization said on Monday.

North Korean leader Kim Jong Un declared an emergency last month and imposed a lockdown on Kaesong, near the inter-Korean border, after a man who defected to the South in 2017 returned to the city showing coronavirus symptoms.

Heavy rain and flooding in recent days have also sparked concern about crop damage and food supplies in the isolated country.

The International Federation of Red Cross and Red Crescent Societies (IFRC) has built an extensive network of North Korean volunteers to help residents in all nine provinces to avoid the virus and reduce damage from floods and landslides, spokesman Antony Balmain said.

“Hundreds of homes have been damaged and large areas of rice fields have been submerged due to heavy rain and some flash flooding,” Balmain said.

Precipitation levels in the North this month were higher than 2007 when the country suffered its worst floods, a spokesman at Seoul’s Unification Ministry overseeing inter-Korean affairs said.

In Kaesong, which was grappling with both the lockdown and floods, IFRC volunteers were providing 2,100 families most at risk with relief items including tarpaulins, kitchen sets, quilts, hygiene kits and water containers, Balmain said.

“Families are being supported with psychological first aid and awareness activities to maintain hygiene and stay healthy,” he added.

Kim has also sent special aid packages to Kaesong, and state media reported on Monday that grain supplies from Pyongyang had arrived in another flood-ravaged county he visited last week.

North Korea has not confirmed any coronavirus cases but has enforced strict quarantine measures. South Korea has said there is no evidence the returning defector was infected.

In South Korea, at least 32 people have died after 49 days of monsoon rains, the country’s longest since 1987, caused flooding, landslides and evacuations. 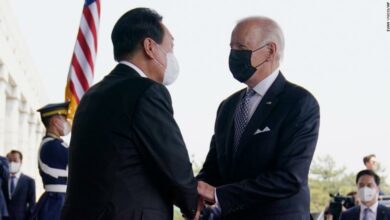