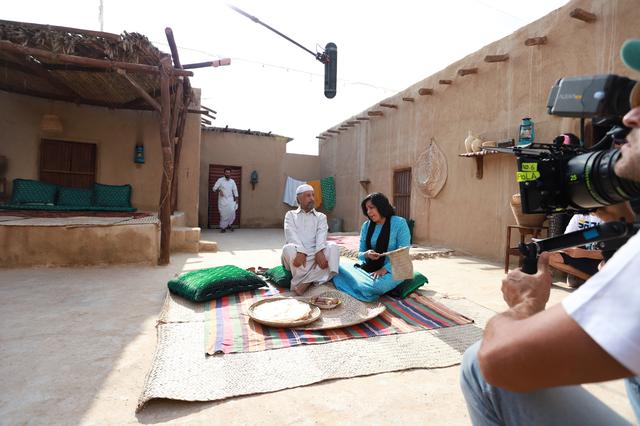 A period drama about the trials of a Jewish midwife airing on Saudi-controlled MBC for Ramadan has drawn both criticisms as an attempt to promote Arab “normalization” with Israel and praise for a rare exploration of the Gulf’s social history.

“Umm Haroun” (The Mother of Haroun), a fictional series about a multi-religious community in an unspecified Gulf Arab state in the 1930s to 1950s, began airing on Friday as part of MBC’s lineup for the Muslim holy month, when viewership typically spikes.

It comes at a time when several Gulf states have broken with the recent past and made overtures to Israel, with which they have found common ground in confronting Iran.

Some, including Saudi Arabia, have also backed a US Middle East peace plan to move on from a conflict they say holds back the Arab world. Egypt and Jordan are the only Arab states that have peace deals with Israel.

An official from the Palestinian Islamist group Hamas, Basim Naeem, condemned the series before it aired and said that portraying Jewish people in a sympathetic light was “cultural aggression and brain washing.”

Hamas, like other Palestinian groups, is vehemently opposed to the peace plan laid out by US President Donald Trump’s administration.

A group of regional organizations against normalizing ties with Israel circulated a poster on social media urging viewers to boycott “the wicked drama”, which was produced by Kuwait- and United Arab Emirates-based companies.

The show’s writers, Bahraini brothers Muhammad and Ali Abdel Halim Shams, said that it had no political message.

“People have spoken and judged before seeing it,” said Muhammad. “The message focuses on the ways of Muslims centered on showing love, good intention and peace to non-Muslims.”

MBC, the Arab world’s largest private broadcaster, said that according to its data the show is the top-rated Gulf drama in Saudi Arabia for Ramadan and among the top five dramas across genres.

MBC spokesman Mazen Hayek said Umm Haroun’s main message was a human one — a nurse who heals people “irrespective of any consideration”.

“It also focuses on tolerance, moderation and openness, showcasing that the Middle East was once a region where acceptance of one another was the norm versus the twisted interpretation and stereotyping of the region by hardliners and extremists, over the last decades.”

Saudi authorities took a controlling stake in MBC Group in 2018 as they seized assets from those detained in an anti-corruption drive launched by Crown Prince Mohammed bin Salman.

MBC, which plans to move its headquarters from Dubai to Riyadh, has courted controversy before. Past shows dealt with sensitive issues like domestic violence and Islamist militancy.

The writers said the main character, Umm Haroun, after whom the show is named, was loosely inspired by real-life Jewish midwife Umm Jan, who arrived in Bahrain from Iraq in the 1930s. A disclaimer during the first episode said the characters and events were imaginary.

Some people in Bahrain, which still has a small Jewish community, took to social media to share pictures of and a 1977 TV interview with Umm Jan, who is widely regarded as a symbol of public service in Bahrain.

In Kuwait, Twitter user Abdulaziz al-Seif said the show should not be seen as pro-Israeli.

“We should also differentiate between the Jewish religion and Zionism … This show has nothing to do with normalizing ties with Israel,” he said in a video post after the show aired its first episode.

Veteran Kuwaiti actress Hayat Al-Fahad, who plays the midwife, told local daily Al Anbaa that young generations should know about “a people that were and still are in our world”.

She recently stirred debate by publicly calling for the expulsion of migrant workers amid the coronavirus pandemic.

Palestinian Nadia Ali, 48, said she was no longer a fan of the actress for “getting the Jewish twisted tale into every Arab house.”