Facebook Twitter LinkedIn
Russian President Vladimir Putin said on Wednesday that his country may support a Security Council resolution for a strike against Syria, but only if it can be proven that President Bashar al-Assad's army used chemical weapons in Syria.
Russia has demanded convincing evidence that the Syrian regime used chemical weapons, Putin said. The country would not take decisive action unless evidence was presented to it.
The Russian president explained that his country has provided Damascus with some parts for a missile defense system, but it has frozen the rest of the shipments.
Russia is Syria's largest military backer. It  has a military base in the coastal city of Tartous in north-west Syria.
In addition to military support, Moscow used its veto to disrupt three resolutions condemning the Syrian regime at the UN Security Council .
This comes just days after U.S. President Barack Obama said he had decided to launch a military strike against Syria, requesting a mandate from Congress.
Edited translation from Al-Masry Al-Youm
Tags
Bashar al-Assad chemical weapons resolution Russian president Security council strike against Syria Syrian crisis vladimir putin 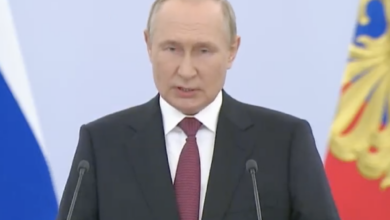