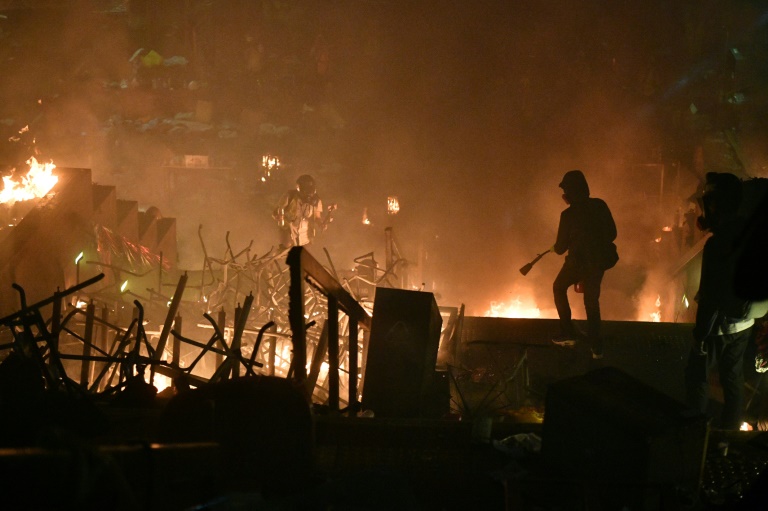 Protests that have paralysed Hong Kong for nearly six months are pushing residents to seek new lives abroad, with many turning to nearby democratic Taiwan to escape the uncertainty at home.

But the number granted short-term and permanent residency in Taiwan rose nearly 30 percent to over 4,000 between January and September from a year earlier, with investment from Hong Kong almost doubling.

Leonardo Wong was in the southern Taiwanese city of Kaohsiung last month scouting locations for a restaurant he plans to open when he moves to the island in January.

“Hong Kong is no longer safe. You don’t know what would happen tomorrow. There are too many external forces that could change the course of things,” the 27-year-old told AFP.

“Now it feels rather like things could never go back to the way they were. We can’t see what kind of future (Hong Kong) is heading towards.”

Taiwan does not recognize the legal concept of asylum or accept refugee applications, fearful of a potential influx from the authoritarian mainland.

But Hong Kongers can apply to live on the island through a variety of means, including investment visas.

Former system analyst Chow Chung-ming recently obtained a residency permit through a scheme that requires a Tw$6 million ($197,000) investment, a fraction of the costs associated with other popular immigration destinations such as Australia, Canada and the United States.

The 41-year-old moved to Kaohsiung attracted partly by lower rents, which have helped him realize a childhood dream of opening a cat cafe this July, but also the island’s relative freedoms.

“In Taiwan, freedom of speech is in the present tense. People can elect the president and lawmakers — rights that Hong Kongers don’t have and I don’t see any chance of ever having,” he said.

Protests in Hong Kong erupted in response to proposed legislation that would have allowed extraditions to the mainland, but have snowballed into demands for greater freedoms in the city.

Beijing officially espouses a so-called “one country, two systems” policy on Hong Kong, allowing the city greater freedoms and rule of law, but protesters argue that has been gradually eroded.

A 50-year guarantee of that status will expire in 2047, with many Hong Kongers convinced their freedoms will keep shrinking until the city is fully absorbed into the mainland.

“I think the tightening on freedom will continue in Hong Kong until it’s ‘one country, one system’,” Chow said.

The current departure of Hong Kongers abroad is described by some as a “third wave”, after many residents went overseas ahead of the 1997 British handover and, in smaller numbers, after the 2014 failure of the pro-democracy “Umbrella Movement”.

Businesswoman Suki Lui has regularly participated in pro-democracy protests, but she now plans to relocate to Taiwan, hoping to give her two-year-old daughter a better future.

“My emotions have gone through so many ups and downs and I feel I have endured more emotion than I can handle,” the 37-year-old said.

“I hope she can get a better education, can enjoy freedom, can realize her dreams in the future… I hope she can choose and live in a city with hope.”

But even those who move to Taiwan will live under a cloud cast by China.

Beijing sees the self-ruled island as part of its territory and has vowed to seize it, by force if necessary, even though the two have been governed separately for the past seven decades.

President Tsai Ing-wen, who took office in 2016, refuses to acknowledge that the island is part of “one China” and has repeatedly voiced support for Hong Kong’s pro-democracy protesters.

In response, Beijing has ramped up economic and military pressure on Taiwan and poached many of the island’s few remaining diplomatic allies.

Tsai faces elections in January against an opponent who favours much warmer ties with Beijing and has called the upcoming vote a “fight for freedom and democracy”.

Some displaced Hong Kongers hope the island will heed the lessons of the unrest in their home city.

“I can’t vote yet but I hope people will vote for someone who can safeguard Taiwan,” said Chow.

Phoenix Law, 30, said she moved to Taiwan in September drawn by the island’s greater freedoms.

“If people (in Taiwan) don’t accept what the president does, they can resist,” she said.

“I hope Taiwanese people are on alert after seeing the situation in Hong Kong. Don’t trust the Chinese Communist Party, what they say may sound nice but that are all lies.”