Street protests hit Iran for a third day running on Saturday, spreading to the capital Tehran with crowds confronting police and attacking some state buildings, and a social media report said two demonstrators had been shot dead in a provincial town.

The wave of anti-government demonstrations, prompted in part by discontent over economic hardship and alleged corruption, are the most serious since months of unrest in 2009 that followed the disputed re-election of then-President Mahmoud Ahmadinejad.

Saturday’s protests, in fact, coincided with state-sponsored rallies staged across the Islamic Republic to mark the final suppression of the 2009 unrest by security forces, with mass pro-government events in Tehran and Mashhad, Iran’s second city.

Pro-government rallies were held in some 1,200 cities and towns in all, state television reported.

At the same time, anti-government demonstrations broke out anew in a string of cities and in Tehran for the first time where protesters confronted and stoned riot police around the main university, with pro-government crowds nearby.

Videos posted on social media from the western town of Dorud showed two young men lying motionless on the ground, covered with blood, and a voiceover said they had been shot dead by riot police firing on protesters.

Other protesters in the video chanted, “I will kill whoever killed my brother!” The video, like others posted during the current protest wave, could not be immediately authenticated.

In Tehran, the semi-official news agency Fars said up to 70 students gathered in front of its main university and hurled rocks at police, also chanting, “Death to the dictator.”

In Tehran and Karaj west of the capital, protesters smashed windows on state buildings and set fires in the streets.

Images carried by the semi-official news agency Tasnim showed burning garbage bins and smashed-up bus shelters in the street lining the university after the protests subsided.

Brigadier-General Esmail Kowsari, the Revolutionary Guards’ deputy security chief in Tehran, said the situation in the capital was under control and warned protesters would face “the nation’s iron fist” if unrest persisted.

“If people came into the streets over high prices, they should not have chanted those (anti-government) slogans and burned public property and cars,” Kowsari told ISNA.

The United States condemned the scores of arrests of protesters reported by Iranian media since Thursday.

President Donald Trump tweeted, “The entire world understands that the good people of Iran want change, and, other than the vast military power of the United States, that Iran’s people are what their leaders fear the most.”

State media quoted Foreign Ministry spokesman Bahram Qassemi as saying in response to an earlier Trump tweet criticizing the arrests: “The Iranian people see no value in the opportunistic claims by American officials and Mr. Trump.”

The Telegram messaging app, with 40 million users in Iran, on Saturday blocked a channel that Iran’s telecommunications minister had accused of encouraging violence in the unrest, its Chief Executive Officer Pavel Durov said on Twitter.

The elite Revolutionary Guards and its Basij militia, which spearheaded the security crackdown that crushed the protests of 2009, said in a statement carried by state media: “The Iranian nation … will not allow the country to be hurt.”

Openly political protests are rare in the Islamic Republic, where security services are omnipresent.

But there is considerable discontent over high unemployment, inflation and alleged graft. Some of the new protests have turned political over issues including Iran’s costly involvement in regional conflicts such as those in Syria and Iraq.

Joblessness has risen and annual inflation is running at about 8 percent, with shortages of some foods contributing to higher prices and hardship for many families.

“We ask people not to take part in unlawful gatherings. If they plan a gathering they should apply (for a permit),” he told the Young Journalists Club news website.

On Thursday, hundreds of people took to the streets in Mashhad, one of the holiest places in Shi‘ite Islam, to protest against high prices, shouting anti-government slogans. Police arrested 52 people, according to a judicial official.

State broadcaster IRIB said on its website it had not covered the protests after being told by authorities that “the issue should not be reflected on state radio and television”.

Most of those arrested in the last two days had been released, state television said, without giving details.

“Enemy websites and foreign media continue to try to exploit economic hardships and the legitimate demands of the people…to launch illegal gatherings and possible unrest,” it said.

Though purely political protests are seldom seen in Iran, demonstrations are often held by workers over lay-offs or non-payment of salaries and by people who hold deposits in non-regulated, bankrupt financial institutions.

President Hassan Rouhani’s leading achievement, a 2015 deal with world powers that curbed Iran’s nuclear program in return for a lifting of most international sanctions, has yet to bring the broad economic benefits the government says are coming.

Unemployment has risen to 12.4 percent this fiscal year, according to the Statistical Centre of Iran, up 1.4 percentage points and leaving about 3.2 million Iranians jobless. 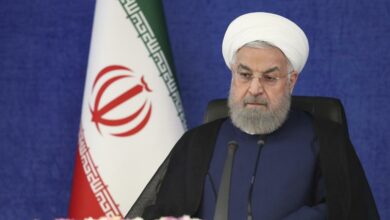 Voices of Iranians ahead of the presidential election