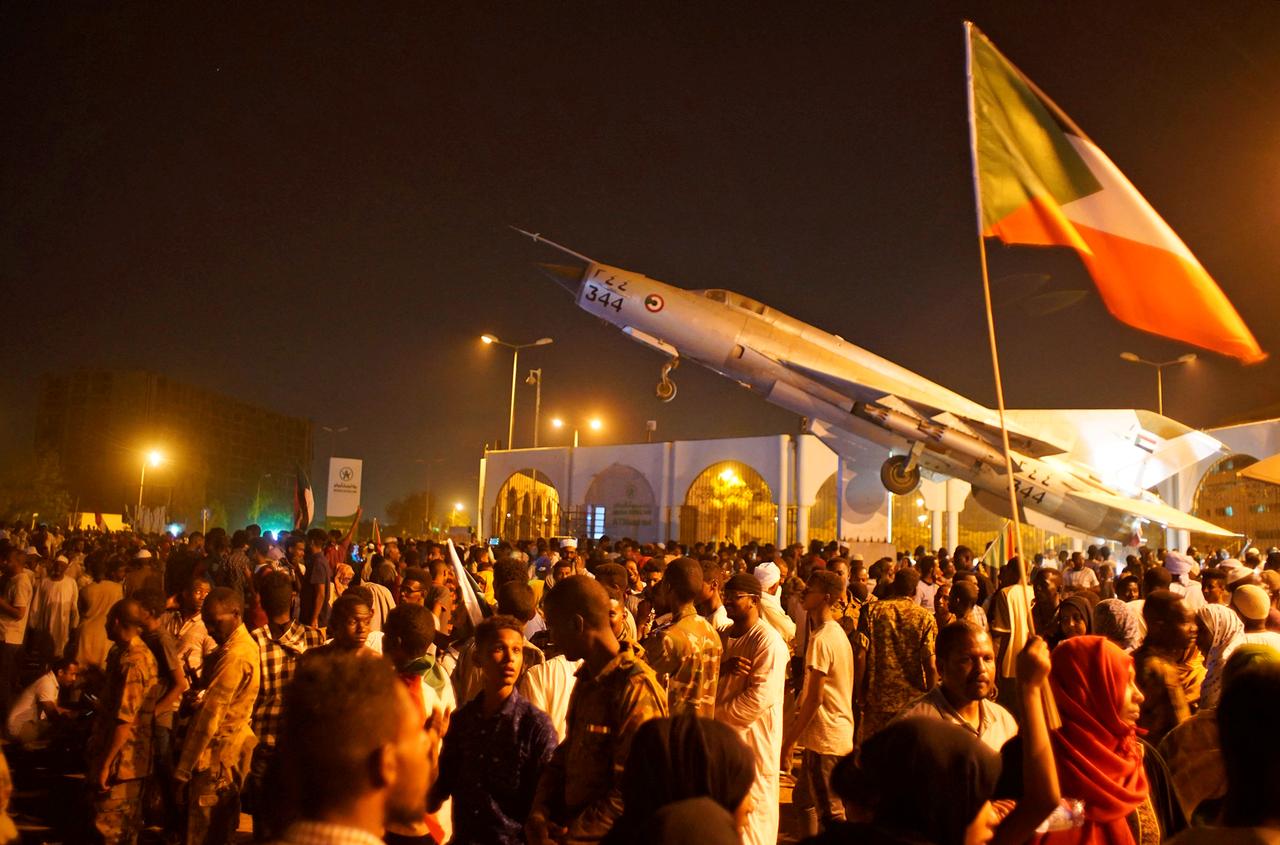 KHARTOUM (Reuters) – Protesters in Sudan said on Saturday they would keep up pressure for civilian rule after the defense minister stepped down abruptly as interim leader following the overthrow of President Omar al-Bashir after 30 years of autocratic rule.

Defence Minister Awad Ibn Auf stepped down as head of the transitional military council late on Friday after only a day in the post, as protesters demanded faster political change.

Celebrations erupted on the streets of Khartoum, where thousands of protesters waved flags and illuminated mobile phones in the darkness and drivers hooted car horns. People chanted: “The second has fallen!” a reference to Ibn Auf and Bashir, witnesses said.

The Sudanese Professionals Association (SPA), which has been leading the protests, called for more demonstrations on Saturday.

“Today, we continue the march to finish the victory for our victorious revolution,” the SPA said in a statement.

“We assert that our revolution is continuing and will not retreat or deviate from its path until we achieve … our people’s legitimate demands of handing over power to a civilian government,” it said.

The new head of the military council, Lieutenant General Abdel Fattah al-Burhan Abdelrahman, is a commander believed to be more ready to talk to demonstrators.

Burhan was the third most senior general in the Sudanese armed forces and is little known in public life. As head of Sudan’s ground forces he oversaw Sudanese troops fighting in the Saudi-led Yemen war and has close ties to senior Gulf military officials.

“What happened is a step in the right direction and is a bow to the will of the masses, and we have come closer to victory,” said Rashid Saeed, an SPA spokesman, adding the group planned more protests on Saturday.

The military council said earlier it expected a pre-election transition to last two years at most or less if chaos could be avoided. The head of the military council’s political committee, Omar Zain al-Abideen, said the council would hold a dialogue with political groups.

The announcement appeared aimed at reassuring demonstrators who had pressed for months for Bashir’s departure and resumed protests against army rule after his ouster on Thursday, calling for quicker and more substantial change.

Bashir, 75, seized power in a 1989 military coup. He had faced 16 weeks of demonstrations brought on by rising food costs, high unemployment and increasing repression during his three decades in power.

The protests escalated last Saturday when thousands of demonstrators, apparently bolstered by change in Algeria following similar protests, marched toward the Defense Ministry in central Khartoum to deliver a memorandum demanding the military side with them.

Demonstrators have been camping outside the compound since then to push for a handover of power.

Worshippers packed the streets around the Defense Ministry for Friday prayers, heeding a call by the SPA to challenge the military council.

The numbers swelled in the afternoon and a Reuters witness estimated hundreds of thousands of protesters thronged areas around the ministry, which was guarded by soldiers.

At least 16 people were killed and 20 injured by stray bullets at protests and sit-ins on Thursday and Friday, a police spokesman said. Government buildings and private property were also attacked, spokesman Hashem Ali added.

He asked citizens to help ensure safety and public order.

Ibn Auf was Bashir’s vice president and defense minister and is among the few Sudanese commanders on whom Washington imposed sanctions over their alleged role in atrocities committed in the Darfur conflict that began in 2003.

Khartoum erupts with joy as Bashir successor steps down