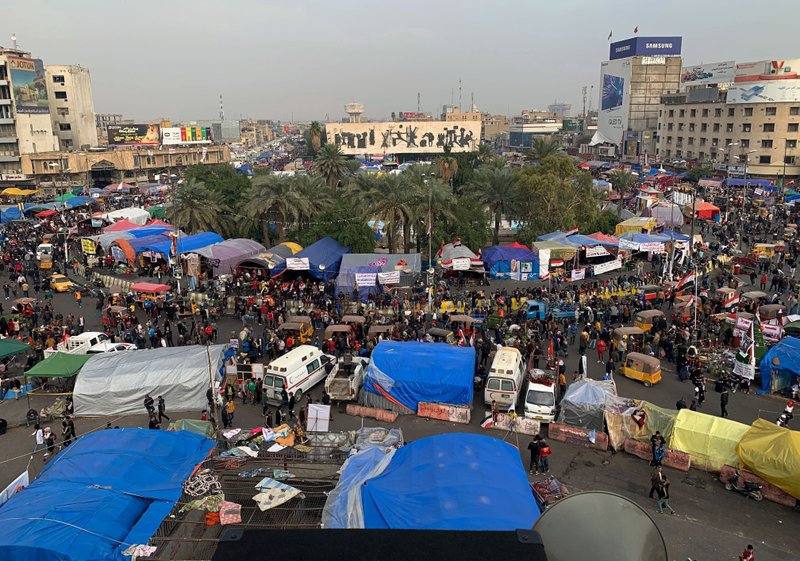 BAGHDAD (AP) — A gunman shot dead six people, including four protesters, on Thursday, provoking some anti-government demonstrators to disarm and hang him in a central Baghdad square, security and health officials said.

The incident was condemned by the wider protest movement based in Tahrir Square, the epicenter of the movement, who said the individuals who killed the gunman were not part of their peaceful demonstrations.

The officials said the gunman, who was wanted on drug-related charges, was running from security forces and fired live rounds first killing two shop owners and then four protesters near Baghdad’s Wathba Square.

Enraged, some protesters overpowered the gunman and disarmed him. Images circulated on social media of the man being kicked and beaten. Protesters strung his lifeless body up on a traffic pole as crowds documented the events on their phones.

Influential Shia cleric Moqtada al-Sadr said that if those who killed the man were not identified within 48 hours, he would order his militia, Saraya Salam, to leave the square.

Members of Saraya Salam — or Peace Brigades — are deployed in the square to protect protesters. In the square they are referred to as the “blue hats.”

At least eight people were wounded, the officials said. They requested anonymity in line with regulations.

Protesters in Tahrir issued a collective statement denouncing the act in an attempt to distance the peaceful aims of their demonstrations from the violent incident.

“We can’t allow the image of our pure revolution to be distorted, so we declare that we are innocent as peaceful demonstrators to what happened this morning in Wathba Square,” the statement said.

Wathba square is located near Tahrir Square, the epicenter of the protest movement, and has been the scene of recent violence. At least 31 protesters were wounded the previous day when security forces fired tear gas to disperse them from the area.

The incident came after a string of mysterious violent incidents perpetrated by unknown groups that have put protesters on edge, eroding the faith of many in the ability of state security forces to protect them.