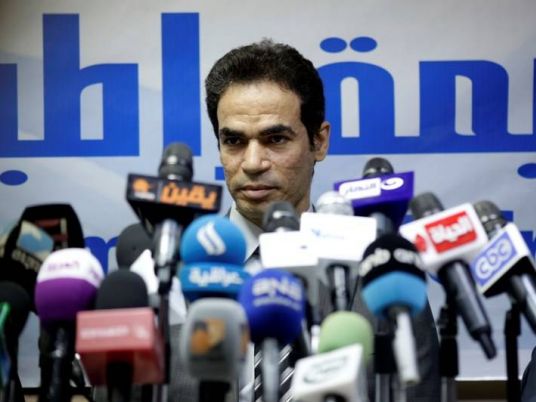 Western institutions are fomenting chaos and Islamist extremism in Egypt, said Presidential Media Adviser Ahmed Elmoslemany in his lecture at the Faculty of Arts and Languages ​​of the University of Bucharest.
The presidential adviser argued that Western powers aim to destabilize Egypt in order to elevate their own position in the world, though he did not clarify how exactly chaos and political instability benefit any of Egypt’s Western allies and trading partners.
Elmoslemany’s argument plays into a common narrative of victimization by the Egyptian political establishment, which blames the West for the rise of the Muslim Brotherhood and the instability that followed after the first democratically-elected president was removed from office by the military.
The lecture was attended by a number of Arab ambassadors, students and professors, where Elmoslemany spoke about his vision for the future after the 30 June revolution, adding that Egypt’s goal is to reinstate the “Egyptian civilizational project.”
After the lecture, the head of the Arabic Department asked Laura Sitaro to translate Elmoslemany’s book “The Great Egypt” into Romanian.
Below is an English translation provided by Egypt Independent of Elmoslemany’s lecture:
Dear students and professors,
I am happy to meet you here today at the prestigious University of Bucharest and I wish you success in your lives and in your education.
Your studying of the Arabic language and literature was the motivation for me to meet the generation of young European researchers who want to learn about us, our visions and our thoughts.
I am coming to you from Cairo, the capital of human civilization, and I humbly know that a large part of the history of the world was formulated in my country. And I am aware that the capital of human civilization has a new appointment with history.
After decades of stagnation and decline, the Egyptians are now trying to resume the journey of civilization that has been stalled by economic and political missteps.
You may have seen the millions of Egyptians that came out in the revolution of 25 January 2011 and the 30 million that came out in the revolution of 30 June 2013.
You may have noticed that they were objecting that the history and the civilization of their homeland had been broken.
Their demands and pains varied, but they all met on the path of resuming the Egyptian civilizational project.
Our country looks to the future with its past heritage and great potential of the present. It looks to the world with deep belief in justice and peace.
Egypt gave the world the notion of a state, a capital, an army and a border long before humanity knew of the notions of belonging and discipline. Also, Egypt dealt with many civilizations in Asia, Africa and Europe.
While Cairo is the pylon of the Great Pyramids, Luxor and Karnak are the center of one third of the worlds ancient artifacts, and Alexandria is the home of the oldest library in history, other Egyptian cities have been the scene of many Christian and Islamic contributions to civilization since the rapprochement with the Greek and the Roman civilizations.
Today, about 90 million Egyptians want to restore that civilization and march toward the future with determination.
Egyptian intellectuals have for two hundred years been linking our past civilization to the modern one. And great scholars of Islam have been providing the true nature of religion. Yet some orientalists and extremists have tried to provide another face of Islam; one that we know nothing of.
Today, we are fighting a tough battle with extremists who are supported from abroad with money and weapons. We are surprised to see Western institutions supporting religious extremism in the Arab world. Since those institutions do not work for the benefit of Islam and Muslims, we look angrily to them. They seek modernity for their countries and extremism and chaos for ours.
They betray the principles they want exclusively for themselves and not others, in a new wave of colonialism whose goal is to establish self- retardation and occupy emerging peoples with events out of our times.
Dear students and professors,
You are lucky to study the Arabic language and literature amid the Arab Spring that has veered into an autumn and returned to spring again. Your generation has seen the spring of our political life and will surely see the spring of our civilization soon.
We know that you want to build a glorious future for your country, and we see your steps towards construction and development after years of difficulties and challenges.
We look to our sister Romania with pride and appreciation. We wish you success and progress. And we hope the Egyptian and Romanian peoples support human aspirations for peace and prosperity.
Dear students and professors
I was happy to participate two days ago in the opening of the Arab European Roman Cultural Center which I hope will be a bridge for exchange of knowledge and cultural dialogue.
Be assured that you have true friends in Egypt. Be sure that we are sincerely determined to face unfair and miserable policies and ideas of today’s world.
Egypt and Romania can work together to support freedom and equality and consolidate bilateral bonds of friendship.
A tribute to your university and the Arabic Language Department, and to you and the students coming after you.
Peace be upon you